Matching recent project location data with a new ranking of the most resilient states from the Great Recession tells us a few things. 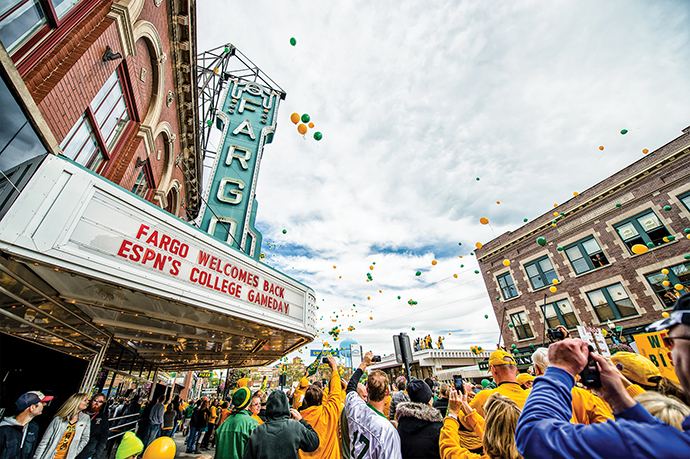 Looking to ride out the next recession? One survey says North Dakota is the most likely place to do it.
Photos courtesy of Fargo-Moorhead Convention and Visitors Bureau
by ADAM BRUNS

In which territories is the local business ecosystem best prepared for the worst, even as all hope for the best?

A recent analysis by online publication Fit Small Business declared a slew of Midwest states the most recession-proof in the nation, led by the Dakotas, Nebraska, Arkansas and Oklahoma.

But what about recession-proof industries? Tech startups are great, but not everyone’s an inventor or entrepreneur with angel funds. Eds & Meds (educational and health care institutions) seem like a bedrock of resilience. But does that hold true everywhere? Moreover, how does an infrastructure of recession-proof businesses influence companies of all kinds in their location decisions?

Top 10 States Most Likely to Weather Next Recession

Dr. Kara Bortone, head of company sourcing for JLABS, a Johnson & Johnson entity, agreed, noting that “health-care-related fields are some of the most recession-proof industries.”

The new machine age “is about automating knowledge-based tasks,” said Anupam Govil, partner at Avasant. “This is resulting in big shifts in the way that work is done. Recession-resistant industries will have to depend on knowledge, innovation and automation. Invest in locations and companies that have these components ... You have to invest into developing the knowledge capital. That is very important in the digital age.”

A recent ranking of states best poised to survive the next recession finds that knowledge is great, but using that knowledge to make things, grow crops and exploit natural resources may be even better. Where are they doing that best? Mostly the Plains and in the Midwest.

Fit Small Business, an online publication, compiled publicly available data (see chart) from the Bureau of Labor Statistics, Bureau of Economic Analysis, and the Federal Deposit Insurance Corporation, among others, across 10 categories that significantly influence a state’s ability to withstand an economic downturn.

The results (see map graphic) carved a distinct path down the center of the United States, with West Virginia the exception. The study also named the cities in the top 10 states that are in the most recession-proof position:

On the surface, the states most likely to weather the next recession appear to tend toward better fiscal balance, more economic diversification and conservative fiscal tendencies that appear to extend across the personal, corporate and government arenas. Their house prices aren’t through the roof. They save money. However, says Fit Small Business Managing Editor Priyanka Prakash, there are caveats.

“Some states that ranked well overall, like the Dakotas, actually didn’t fare very well in terms of economic diversification/export dependence,” she says. “Oil is a big part of their economies. However, their performance in other categories — such as low unemployment rate and good fiscal balance — made up for the mediocre showing in diversification/exports.”

How do these states perform in Site Selection’s own Top 25 business climate rankings? No. 2 Nebraska is 16th, No. 5 Oklahoma is 17th, No. 9 Wyoming is 24th and No. 10 Indiana is 10th in business climate too — the highest finish among the Top 10 recession-proof bunch. Conversely, our No. 1 business climate state, Georgia, finishes 35th in the Fit Small Business recession-proof rankings, with No. 2 North Carolina 30th, No. 3 Texas 15th, No. 4 Ohio 32nd and No. 5 Tennessee 18th. In sum: Indiana and Texas are in the best position across both indicators.

Site Selection also took these results and looked at corporate facility investment data since January 2012 in the top 10 states. Which industry sectors and sub-sectors have been investing the most in these recession-proof territories?

As the map below illustrates, and as Prakesh suggests, having natural resources like oil & gas or coal seems to be a calling card for territories with an economic development backstop. Agriculture and food processing are prominent too, along with metals, chemicals and perhaps the ultimate insurance policy: the insurance and business services sector itself. 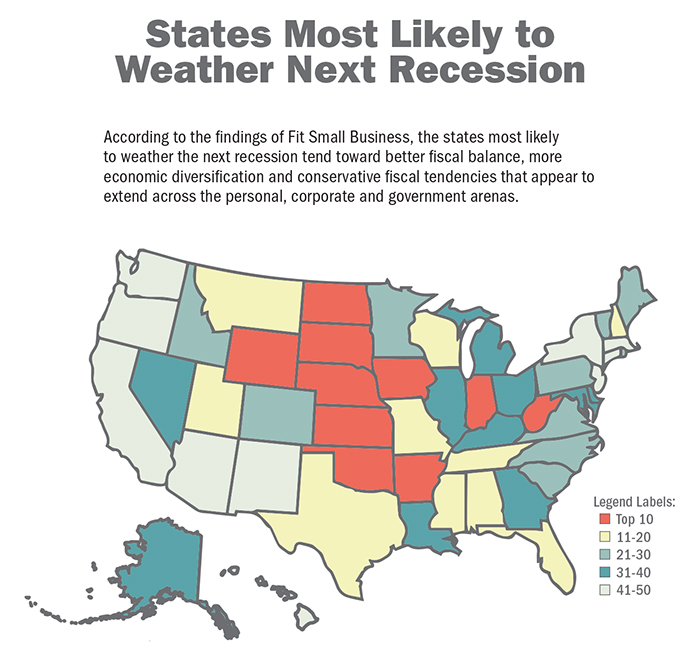 It’s worth thinking about the next time things start to look bleak. The windswept plains’ reputation for hardiness, stoicism, humility, a low appetite for risk and a highly developed work ethic is well earned. Those qualities may best gird your region or your company for riding out any economic ill winds to come.

To explore the full data and methodology of the Fit Small Business rankings, visit fitsmallbusiness.com. 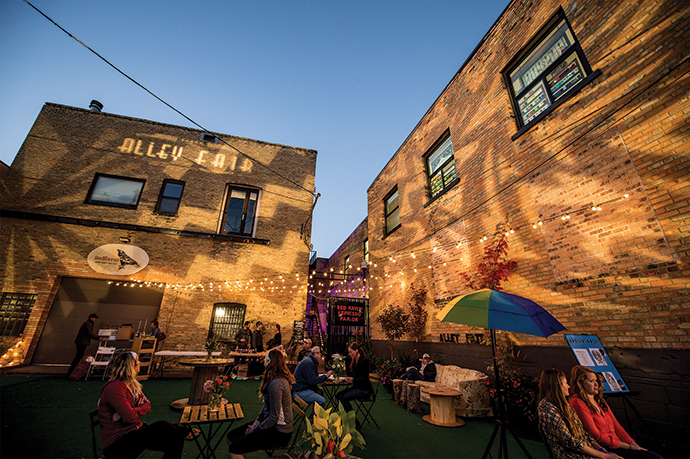 Alley Fair is a community event that works to activate and transform the alleyways of downtown Fargo by bringing together the area’s best food, music and art.