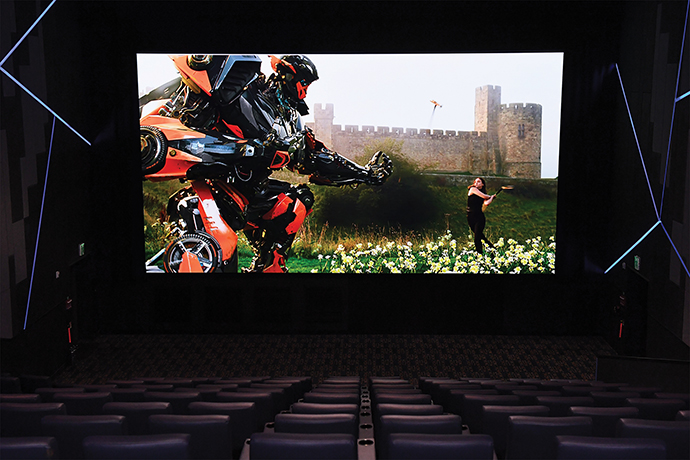 In July, Samsung Electronics announced it had installed its first ever commercial Cinema LED Screen at Lotte Cinema World Tower in Korea.
Photo-rendering courtesy of Samsung
by ADAM BRUNS

Over a recent five-year period, Seoul, Busan and Ulsan were the top Korean metros by number of major corporate facility investments across 12 key sectors, according to analysis of the Conway Projects Database.

But the most key sector of all drives all the rest: Semiconductors and electronics. And the country’s global leaders in this arena show no signs of stepping off the gas.

In July, Samsung Electronics announced its new semiconductor fabrication line in Pyeongtaek, South Korea, has begun mass production and shipping its first product to customers. The new facility, where construction had begun in May 2015, is now the largest single fab in the industry, and will focus on the production of Samsung’s fourth-generation V-NAND (64 layers).

“Recent emerging IT trends such as the Internet of Things (IoT), artificial intelligence (AI), big data and automotive technologies [have] sharply increased demand for next-generation components,” the company said. “In response to these market needs, Samsung, across both Samsung Electronics and Samsung Display, plans to reinforce its manufacturing capabilities by investing more than KRW 37 trillion [US$33 billion] in investments to its global production facilities.” By 2021, about 80 percent of that total is headed to Pyeongtaek, with another 6 trillion South Korean won ($5.3 billion) headed toward a fabrication line at the company’s Hwaseong, South Korea, site.

Meanwhile, Samsung Display is reviewing plans to establish a new OLED manufacturing site in Asan, South Korea, by 2018, and plans to construct a second semiconductor fabrication line at its plan in Xi’an, China, constructed in 2014.

Of course, semiconductors are not the only arena in which one of South Korea’s most esteemed chaebols (family conglomerates) plays. And many of those industries accrue to Korea’s favor. In April, Samsung Electronics announced its LTE-Railway (LTE-R) solution successfully launched its official service on the 41-km. (25-mile) Busan Metro line 1 that covers 40 stations in the region. The Busan Transportation Corporation(BTS), SK Telecom and Samsung collaborated to replace the existing analogue wireless technology used for mission-critical railway operations with the new solution, which as soon as early next year will be deployed on trains capable of speeds as high as 300 km./hour (186 mph). The Korean government plans to increase the distance that the LTE-R project covers to roughly 5,600 km. (3,480 miles) by 2025.

The lion's share of a planned $33 billion in spending at Samsung's global manufacturing sites will go to this site in Pyeongtaek, which in July began mass production and shipping from a new semiconductor fabrication line.
Photo courtesy of Samsung

Samsung isn’t the only Korean corporate giant inching its way into its home country’s infrastructure in innovative fashion. In preparation for South Korea’s hosting of the 2018 Winter Olympics, LG Electronics in July put into trial service at Incheon International Airport a number of “Airport Guide Robots” and “Airport Cleaning Robots” to help serve the airport’s approximately 57 million annual travelers. Able to understand Korean, English, Chinese, and Japanese, the guide robots can even escort the late or lost traveler to the right departure gate on time.

In early 2016, LG Electronics reaffirmed its commitment to Korea’s solar power manufacturing too, by cementing an MOU with the city of Gumi o invest $435 million to expand solar cell manufacturing facilities. The addition of six production lines to the current eight will increase capacity from 1GW to 1.8GW by 2018 and 3GW — equivalent to the electrical power consumed by one million households — by 2020.

“The new fab to be constructed in Cheongju will become a part of our key production facilities to gear up for the upcoming fourth industrial revolution,” said Sung Wook Park, CEO of SK Hynix, “Sincerely appreciate great assistance from the National, Chungchweongbuk-do and Cheongju government officials in the construction of the new FAB at a proper time.

According to the World Fab Forecast from industry consortium SEMI, released in September, 2017 fab equipment spending (new and refurbished) was expected to increase by 37 percent, reaching a new annual spending record of about US$55 billion. In 2018, “fab equipment spending will increase even more, another 5 percent, for a record high of about $58 billion,” said the report, with spend in Korea, Americas, Japan, and Europe/Mideast growing in the double digits. “The largest equipment spending region for both years is Korea, which jumps to about $19.5 billion in spending for 2017 from the $8.5 billion reported in 2016,” said SEMI, noting that Samsung alone plans to spend $15 billion in 2018. “This represents an astounding 130 percent growth year-over-year.” 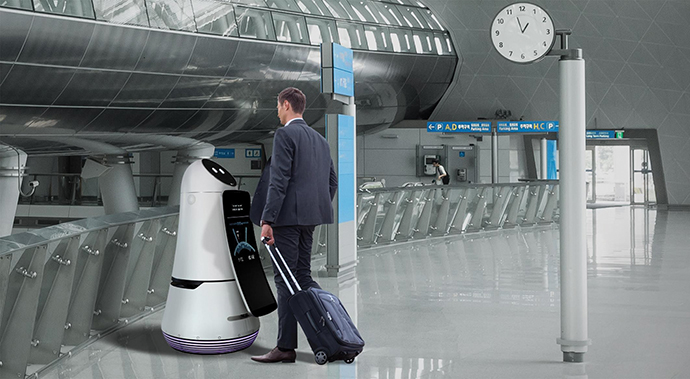 One invention set to emerge from LG’s home-country investment will be airport guide robots, now in trial service at Incheon International Airport.
Photo courtesy of LG