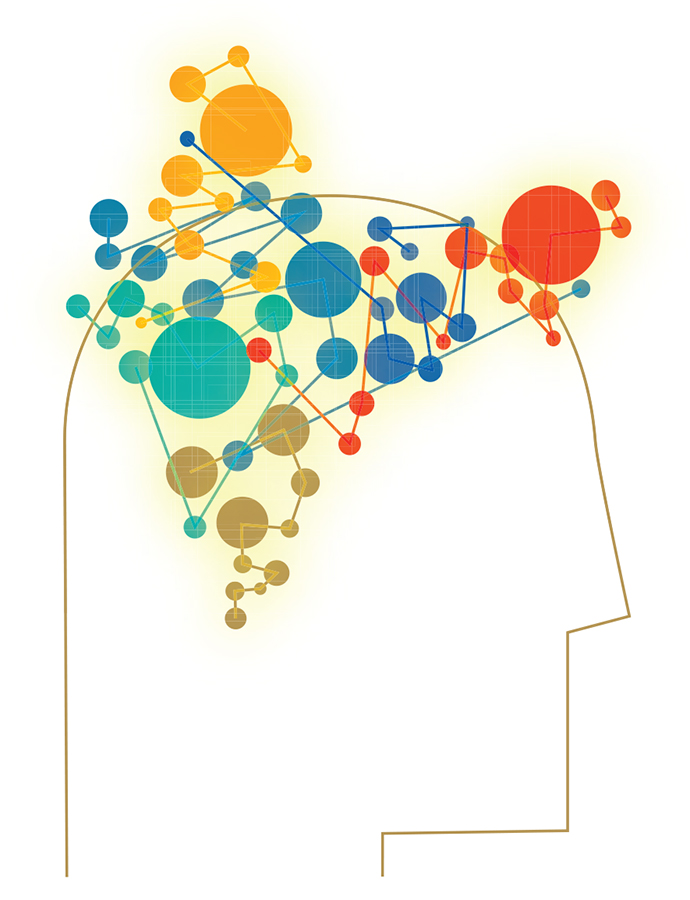 In the fall of 2008, amid increasing tensions and outbreaks of violence, Tata Motors abandoned a new manufacturing plant in West Bengal, India, a decision estimated to have cost the company $350 million. Fortunately for most multinational companies (MNCs) in decades past, selecting the wrong location for geographic expansion did not come at such a high cost. But today, site selection has become increasingly difficult. Markets once deemed “the place” to invest in a new facility or regional headquarters now require a closer examination given the realities of today’s operating environment — growth is slowing, competition is increasing, and where to focus is becoming increasingly opaque. Incidents of high-profile, high-cost redirections (like that of Tata Motors), are on the rise.

Interestingly, though, India is currently drawing increased international attention as one of the most resilient economies in an uncertain global economic environment. However, given the size and complexity of the market, there are substantial economic disparities within the country that need to be acknowledged. Additionally, gradual liberalization and rapid decentralization are exacerbating already-significant regional differences. These factors make a state-level approach acutely important for India. A rigorous prioritization strategy can help companies avoid pitfalls and target the right states for business. Companies should adopt a three-step framework to prioritize and categorize states in India based on opportunity and business fit, allowing executives to make more informed decisions and strengthen their India strategic plans.

Building a national strategy for India would be an arduous task because of large and often underestimated regional differences. These differences lead to wide variations in business landscapes, including language, culture, talent, infrastructure and wealth. For example, census data show 122 major languages are spoken across the country. Adding to its complexity, India’s federal structure means states with different priorities and policies can determine the direction and health of the local economy, something we expect will become even more prominent in the future.

To get a sense of just how diverse states are across the country, take a moment to review the map, comparing Indian states to a variety of countries in terms of both population and GDP.

The Increasing Importance of Indian States

The importance of state-level analysis in India cannot be exaggerated. India’s federal structure ensures that certain key policy decisions are the states’ responsibility. Policies relating to healthcare, infrastructure development, land and labor, and transport fall under the purview of the states. Furthermore, important institutional aspects for business, such as resolution of commercial disputes, license and permit clearances, and taxation, are jointly undertaken by both the central and state governments. This federalist structure has resulted in wide variations in infrastructure, poverty alleviation rates, human development indicators and investment climate among Indian states. This is due to differing state government priorities, which range from developing rural areas to improving infrastructure or easing procedures to increasing investment.

Going forward, we expect state policy will become even more prominent in determining the overall economic outlook for the country. Competitive federalism is fast gaining traction in India; the central government is devolving power to state governments, encouraging them to dictate their own economic policies. This federalist approach is intended to encourage the states to compete for foreign investment on the basis of economic policy, incentives, and ease of procedures. Evaluating state-level opportunity in India is key as executives must allocate resources effectively within the country.

Progress in Indian states has been uneven, and it is clear that states can vary considerably in size, growth rates and levels of development. The larger states continue to dictate the growth story and have economies comparable to Iraq and New Zealand (Maharashtra), and Morocco and Ecuador (Tamil Nadu and Gujarat).

Some of the smaller, relatively fast-growing states like Madhya Pradesh and Bihar are also gaining prominence, although they are growing from a low base. Understanding the diversity of the Indian economy is crucial. Despite the Indian economy’s overall reliance on the service sector, the economy of individual states can vary substantially. A closer look at states gives a better sense of what is driving their economies. 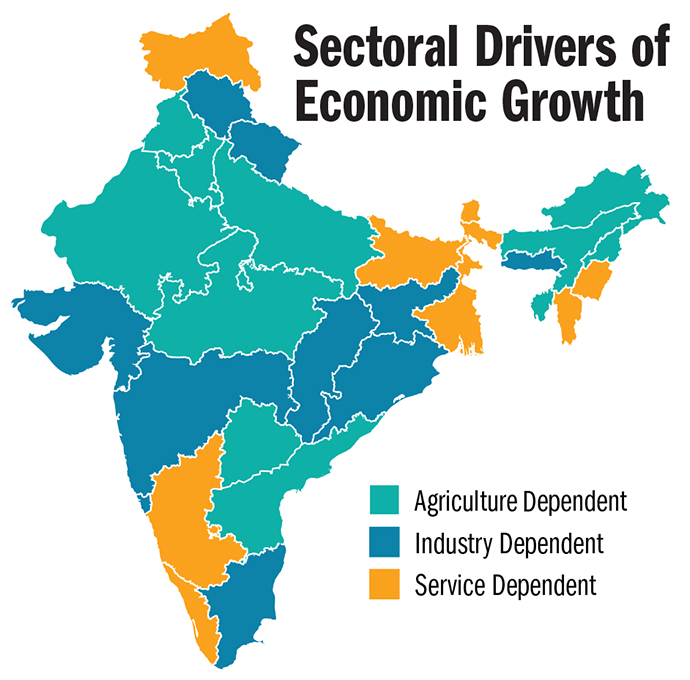 The northern and central states of Punjab, Rajasthan, Uttar Pradesh, Haryana, and Madhya Pradesh continue to rely on agriculture, while the southern states of Karnataka and Kerala depend on the service sector. Interestingly, other, less-developed state economies like Bihar and West Bengal are also driven by the service sector. The economies of many of the large and relatively prosperous states, including Maharashtra, Gujarat, and Tamil Nadu, are driven by the manufacturing sector and industrial development. Some smaller, less-developed states like Jharkhand and Chhattisgarh are also driven by industry, as they are the mining centers in India. The government’s focus on enhancing the manufacturing sector and increasing productivity and jobs is likely to benefit these industry-dependent states.

Getting Your State-Level Plan Right

Multinationals often use output and population statistics to prioritize states in India. While this may be successful in some of the traditionally progressive states like Maharashtra and Gujarat, using output and population data would make states like Uttar Pradesh and West Bengal extremely attractive. A closer look at these economies reveals that they are some of the poorest regions in the country. On the other hand, some states like Kerala and Haryana, which do not feature in the top states by output, have some of the highest per capita GDP rates in the country. Cultural variations are also important. 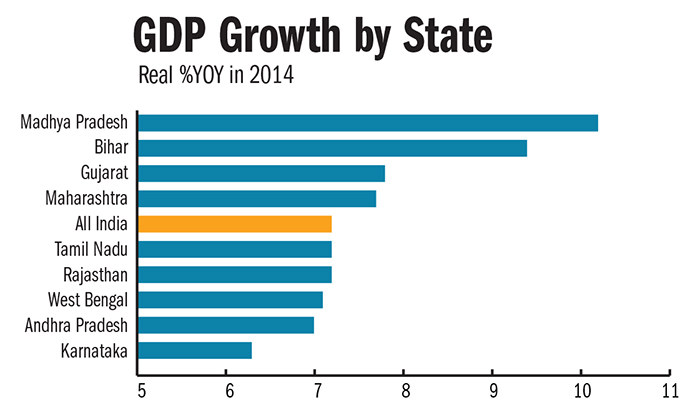 Other than the well-documented differences in language and development, demographic differences are also significant. For instance, South India is older, with higher spending capabilities and a more skilled population, while North India is younger and relatively poor. North Indians prefer speaking in Hindi, while South Indians prefer communicating in English or their respective state language. More notably, the pace and willingness of state governments to implement business-friendly reforms is important. Oftentimes, even when a state economy is attractive, the complexity of regulations can make doing business arduous (as previously mentioned). A deeper understanding of the economic opportunity and the regulatory environment is crucial in prioritizing states in India.

Such vast regional differences make it critical to have a structured prioritization process to evaluate markets within the country. The following 3-step process can be used to prioritize Indian states, and determine which state-level markets represent the greatest opportunity for your specific industry. 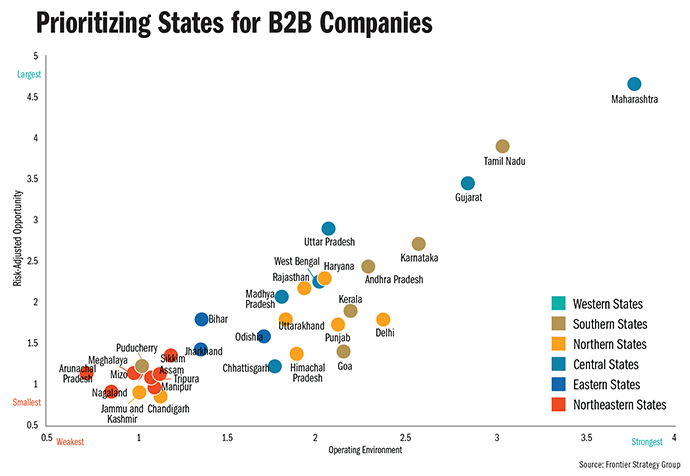 First, companies should measure the “risk-adjusted opportunity” of each state, by analyzing leading indicators of size, growth, industry clusters and market stability. Example indicators for each of the four categories could include: 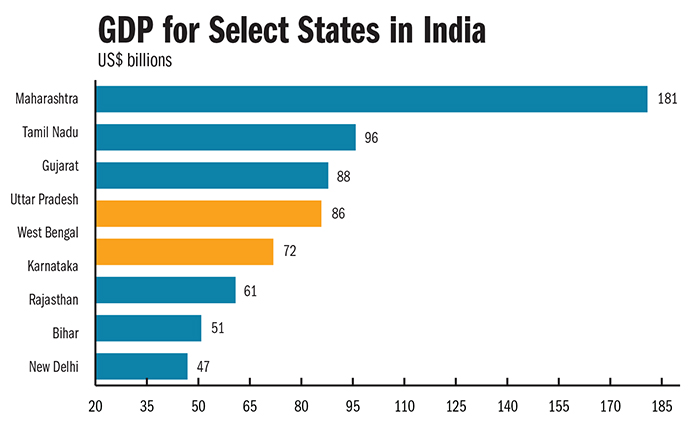 The chart offers an illustrative example of a Risk Adjusted Opportunity.

Second, companies should measure the operating environment of each state, by analyzing indicators related to Infrastructure, Access to Talent, Access to Finance and Business & Tax Environment. Example indicators for each of the four categories could include:

The chart offers an illustrative example of the Operating Environment analysis. 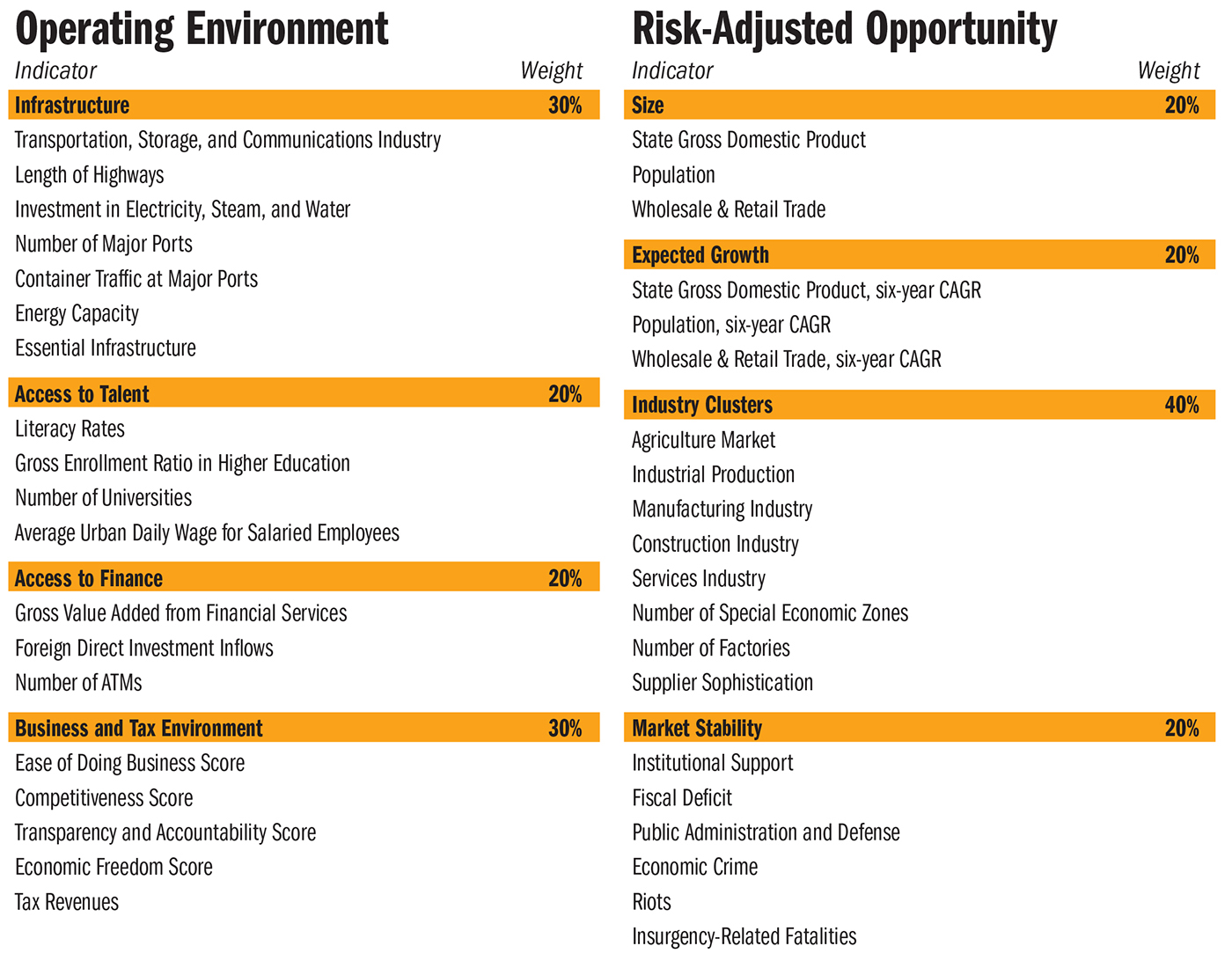 By plotting the Risk-Adjusted Opportunity on the Y-Axis and Operating Environment on the X-Axis, and then populating the state-by-state results, corporate investors can clearly see which states offer the highest ROI and represent the greatest opportunity for their business.

This three-part market prioritization framework allows companies to take into account the unique state-level dynamics of the Indian market. By adopting a rigorous quantitative approach, executives can create internal alignment on their resource allocation decisions, disaggregate the country, and be rest assured they are making the right decision in one of the world’s largest and most dynamic markets.

About the Authors: Pratima Singh is Practice Leader for India at Frontier Strategy Group (FSG), the leading information and advisory services partner to senior executives in emerging markets. Emily Scott is Managing Director of Market Prioritization Engagements at FSG where she supports corporate executives on their global, regional and sub-national market prioritization initiatives. Eric M. Johnson, Senior Analyst at Frontier Strategy Group contributed to this article. For more on the firm, visit www.frontierstrategygroup.com.