A Year of High Definition

Factory fever breaks out all over in a record-setting year for Wisconsin. 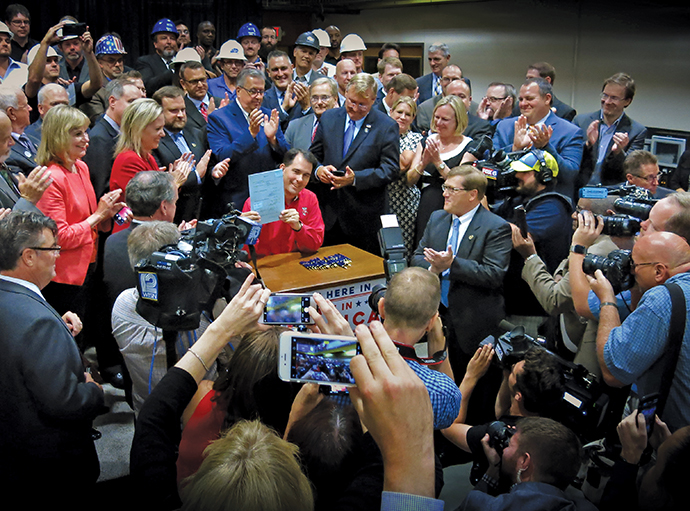 Wisconsin may have snared the biggest headlines of the summer by snagging Foxconn’s prized $10-billion capital investment, but a closer look reveals that the Badger State came away with a lot more than just bragging rights.

While the national news media focused mainly on the announcement of Hon Hai Precision Industry Co. Ltd. (Foxconn) to build a 20-million-sq.-ft. (1.86-million-sq.-m.) advanced electronics manufacturing complex in Southeast Wisconsin, the Wisconsin Economic Development Corp. was busy working behind the scenes to land other deals of note.

A busy first half of 2017 saw WEDC land significant capital investments from Haribo, Generac and Dynamic Recycling — part of a wave of expansions that have put Wisconsin on the brink of recording its single greatest year in history.

Dynamic Recycling Inc., a national electronics remarketing, recycling, and scrap purchasing and logistics company, announced that it would invest $20 million to expand its operations in La Crosse County and create around 150 new jobs. The expansion comes less than three years after the company relocated to Onalaska because it had outgrown its old facility in La Crosse. It also marks the firm’s fifth expansion since its founding in 2007.

“We started here in Western Wisconsin 10 years ago with one division. We now have four divisions in two locations,” says Miles Harter, CEO of Dynamic Recycling. “We have an offshoot company called Minnesota Computers, and right now we have about 200 employees and 250,000 sq. ft. [23,225 sq. m.] of space in Wisconsin.”

Harter credits state tax policy with facilitating the expansion. “I appreciate that they set up a special state tax for manufacturers and backed off the tax bracket for manufacturing. That has substantially dropped in the last five years. Wisconsin now credits up to 7.5 percent off the state income tax bracket,” he notes. “They have also been very supportive with job tax credits and putting in a new road.”

WEDC authorized up to $535,000 in state income tax credits to DR over the next four years and up to $17 million in tax-free Industrial Revenue Bonds.

The North Wins This Battle

“The governor is very pro-business. He visited here a month ago and congratulated us on the expansion,” Harter says. “We considered Atlanta, Chicago and North Carolina before choosing Wisconsin for the expansion. We also looked at some equipment in Florida, but ultimately we chose Wisconsin for several reasons.”

Those decisive factors included support from the state, the fact that DR already has its headquarters in Wisconsin, and a superior workforce. “The workforce in this area is strong,” he adds. “The team is very hard-working. And the quality of life here is great. We have bluffs, a river, snowboarding, fishing, apple picking, pumpkins, blueberries and raspberries, four-wheeling and a whole lot more.”

HARIBO, the German-based confectionery company and maker of the popular Gold-Bear gummy candies, announced in March that it would invest $242 million to build its first North American factory in Pleasant Prairie in Kenosha County. The 500,000-sq.-ft. (46,450-sq.-m.) plant is expected to employ about 400 workers in Southeast Wisconsin. WEDC awarded up to $21 million in performance-based state income tax credits to the company through 2028.

Generac Power Systems, meanwhile, elected to invest more than $73 million to expand production at its facilities in Waukesha, Oshkosh, Jefferson, Eagle, Whitewater and Berlin. WEDC awarded up to $10 million in Enterprise Zone Tax Credits to the firm through 2021. The project is expected to create at least 400 jobs over the next five years.

The granddaddy of them all, however, remains Foxconn, and the past two months brought a bevy of news around the project by the $136-billion company based in Taiwan.

The biggest development occurred September 18 when Gov. Scott Walker signed into law a bill authorizing up to $3 billion in incentives for Foxconn. The bill signing paved the way for Walker and the WEDC to negotiate a final contract with Foxconn Technology Group of Taiwan on the plant that will employ up to 13,000 workers upon buildout.

The WEDC maintains that the project will have a $7-billion annual economic impact on the state. “With an average annual salary of almost $54,000, Foxconn payroll alone will be over $800 million a year,” said Wisconsin Department of Administration Secretary Scott Neitzel.

After Kenosha County cited cost concerns and took itself out of the running to land the liquid crystal display assembly plant, focus shifted to Racine County. On October 4, the juggernaut of all factory projects landed at a 1,200-acre (485-hectare) site along I-94 in Mount Pleasant. “This is truly an historic day for Racine County,” said Racine County Executive Jonathan Delagrave. About 35 landowners had to agree to the land sale. Published reports state that property owners were offered $50,000 an acre for the open land.

Upon announcement of the final site, a key member of the Foxconn executive management team confirmed that the elaborate project would move forward. Louis Woo, special assistant to Foxconn Chairman Terry Gou, said the company will hire 13,000 workers directly and create “tens of thousands” of additional jobs at suppliers, vendors and contractors supporting the new plant.

In the meantime, Foxconn has negotiated a lease to secure a Mount Pleasant building where the firm could begin assembling products before starting construction on its main campus in what Walker calls “Wisconn Valley.”

Jim Paetsch, vice president of the Milwaukee 7, says that the pace of activity will accelerate. “The state and Foxconn are finalizing their incentive contract, and Racine County and the Village of Mount Pleasant will be going through the required public approvals for their respective packages,” he says. “Foxconn will be working with state and local authorities to get the site ready for construction, which is expected to begin in the first half of 2018.”

Foxconn officials declined a request to be interviewed, but they did issue the following statement: “We greatly appreciate Governor Scott Walker’s efforts to help us move forward with our plans to build the state-of-the-art advanced display manufacturing campus in Southeastern Wisconsin. We are eager to work with the people of Wisconsin to bring an 8K+5G ecosystem to the state and make it a center of worldwide high-tech manufacturing.”

Upon completion, the new factory in Wisconsin would be the most advanced TV monitor assembly plant in the world, Foxconn says. It will also mark the largest greenfield investment by a foreign-based company in US history.

“Wisconsin is ready,” said WEDC Secretary and CEO Mark Hogan. “With 13,000 family-supporting jobs, a $10-billion capital investment, and countless opportunities for our academic partners, our existing job-creating businesses, and our taxpayers, Wisconn Valley will be transformational for our 21st century economy.”

Paetsch adds that “the Foxconn project plants Wisconsin’s flag in the digital economy of the 21st century. When this project is complete, the Milwaukee region will be the electronics manufacturing capital of North America.” 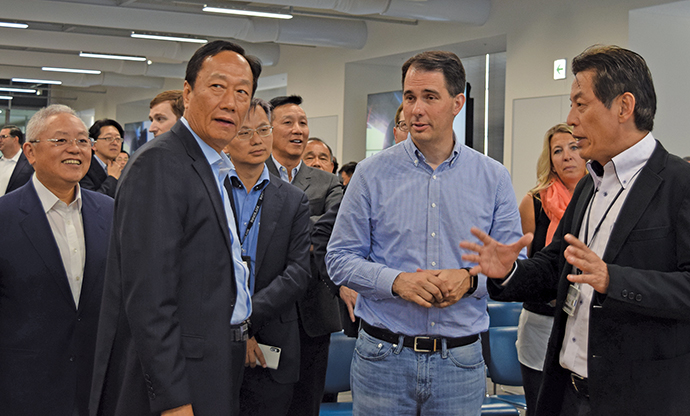