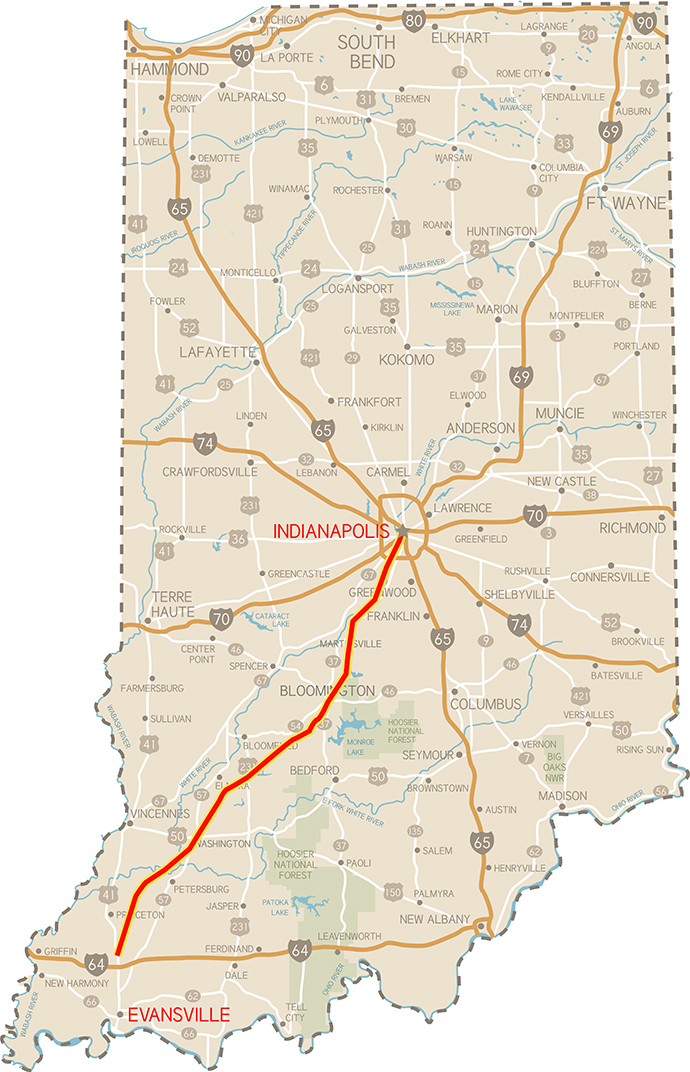 The I-69 Corridor, connecting Indianapolis and Evansville, is an emerging and critical section of the NAFTA superhighway.

Sites along the new I-69 Corridor in southwest Indiana won’t stay vacant for long.

If site selectors wait until the NAFTA superhighway is complete between Indianapolis and Evansville, Indiana, to pick the location of their next Hoosier facility, it may be too late. Much of the new highway — the Interstate 69 Corridor — is complete, and capital investment has commenced. Some sections and interchanges will not be ready for several more years. “At the peak of construction in 2012,” according to the Indiana Department of Transportation, “I-69 was the longest contiguous new terrain interstate construction project in the US, putting Indiana in an enviable position to attract new jobs in a competitive global marketplace.”

Part new road construction and part adaptation of existing state highways, the I-69 Corridor runs north from I-64 north of Evansville in southwest Indiana to Washington, in Daviess County, which already is welcoming new investment. It continues northeast to Naval Support Activity-Crane (NSA Crane), a 98-square-mile naval base that’s home to the Crane Army Ammunition Activity and the Naval Surface Warfare Center, Crane Division, and approximately 5,500 personnel. Then the highway heads for booming Bloomington, home of Indiana University, and on through Martinsville to Indianapolis.

Two regional organizations based in southwest Indiana — Regional Opportunity Initiative (ROI) and Radius Indiana — have funds in place to facilitate investment along the Corridor. ROI is a nonprofit organization focused on education, workforce and quality-of-place initiatives that will affect the region’s ability to take advantage of the area’s potential.

“We have some pretty impressive industry sectors — life sciences, defense, and advanced manufacturing in particular — that can set us apart from other regions,” says Tina Peterson, president and CEO of the Community Foundation of Bloomington Monroe County and interim president of ROI. “While there are 14 sectors represented in our 11-county region, these three have great potential for us. Through our quality-of-place efforts, we’re thinking about I-69 as another asset that brings real value to southwest central Indiana,” she relates.

“One of the initiatives we’re involved in is gaining a better understanding of the potential I-69 may have,” Peterson continues. “We contracted with HWC Engineering to look at the 12 interchanges in the three counties in our territory the Interstate crosses, and how could we develop those interchanges in a way that would also allow us to achieve our economic and community prosperity goals as a region. Some interchanges are ripe and ready. Some have topography issues and would take longer to develop.” The analysis of the interchanges should be complete by late summer.

Going forward, says Peterson, “we’ll have to think about a strategic plan for the I-69 Corridor. We will want to align with what’s coming out of the joint land use plan at NSA Crane. We need to be really thoughtful about our competitive position as a region, and how we are telling that story to the rest of the world. I-69 gives us a more competitive position for doing that.”

Radius Indiana is an economic development agency, working on behalf of eight southwest Indiana counties, including some served by ROI. Jeff Quyle, president and CEO, says the agency’s regional impact fund has already assisted six projects in 2017 to the tune of about $1 million in incentives. Quyle refers to land at the intersection of I-69 and US highway 50 in Washington, in Daviess County, as “probably one of the finest sites in Indiana. A CSX line runs about a quarter mile away, so there is rail and Interstate. Two 900-acre sites are at that interchange now,” he points out. “The city and Daviess County economic development have also put up a spec building and paid for spurs off the rail line.”

One project in Washington is a direct result of the I-69 opening in Daviess County. M&C Tech Indiana is a Japanese joint venture between Moriroku Chemicals and Chubu Chemicals that is investing $4.6 million to build a 40,000-square-foot factory to supply parts to automotive manufacturers. 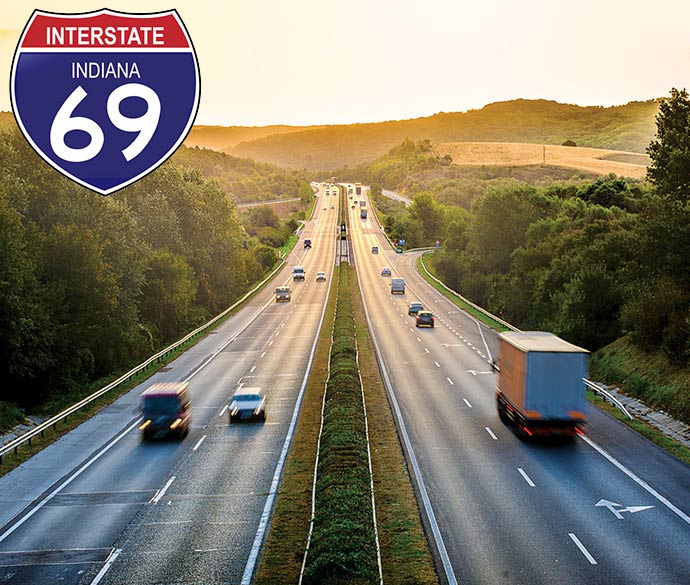 North of US 50 about 20 miles is the interchange at NSA Crane, where a state certified technology park and the Battery Innovation Center (BIC) can be found. Purdue University is opening an entrepreneurship and commercialization center in the area, and government contractor Alion Science and Technology Corp. just broke ground in Odon, near NSA Crane. Quyle says BIC is “one of the best facilities for research, development and prototyping in the US when it comes to energy storage.” In July, BIC announced a new partnership with a company called BrightVolt that produces flexible, thin-film batteries.

“One of the key prongs of the BIC’s mission is to work with high-growth technology companies to help them validate their technology and reach the point where they are ripe for commercialization of their products, licensing or larger investment,” noted BIC’s chief operating officer, Ben Wrightsman, at the partnership announcement. “We fully believe our partnership with BrightVolt will be helpful to their development, and ultimately to the economic development of Greene County and the Radius region as more diverse technology is developed here locally rather than offshore.”