Insights from REI’s supply chain VP show where goods movement is moving next. 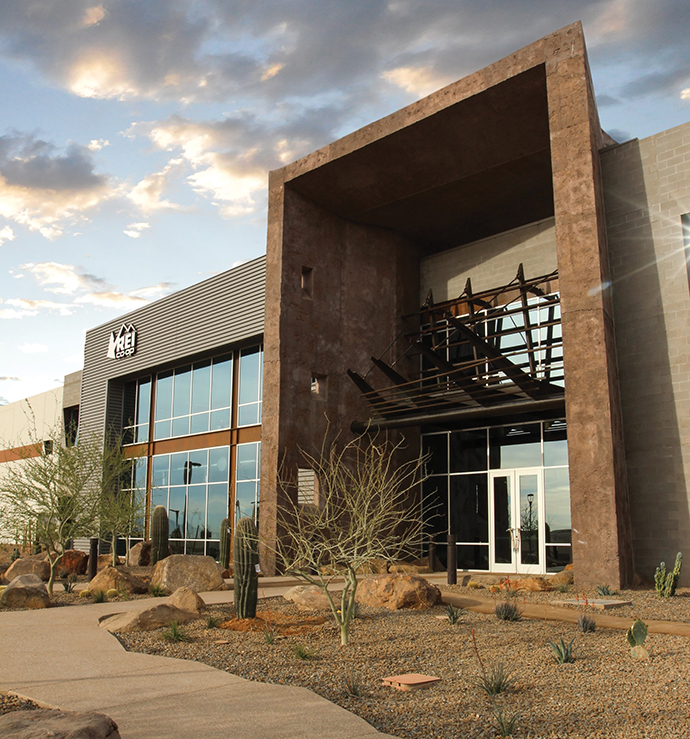 REI’s new LEED-Platinum distribution center in Goodyear, Arizona, reflects the company’s love of the outdoors and regard for its employees.
Photo courtesy of REI
by ADAM BRUNS 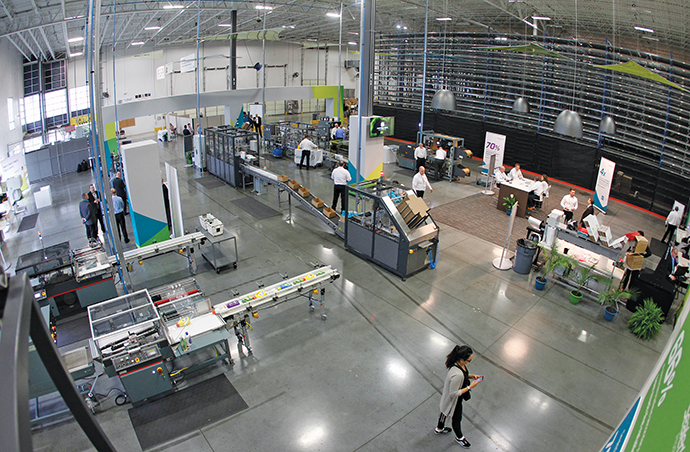 UPS and Sealed Air Corp. in May announced the opening of a Packaging Innovation Center at the UPS Supply Chain Solutions campus near the UPS Worldport facility in Louisville to help solve the packaging and shipping challenges of e-commerce retailers, among others.
Photo courtesy of UPS
Photo courtesy of UPS

The UPS project, announced in June, stands out in terms of jobs (1,500). But the 400,000-sq.-ft. (37,160-sq.-m.), 100-job REI project stands out in another sense: It’s the first distribution center in the United States to earn LEED-Platinum certification from the U.S. Green Building Council and achieve Net Zero energy status. The site represents a new standard for sustainable logistics operations, and thus serves as a model attracting worldwide interest.

Asked to describe the original site selection process, Rick Bingle, REI’s vice president of supply chain, says, “As with all retailers, our objectives were to address growth, improve service timing to our stores and direct customers, reduce total operating cost and decrease our carbon footprint.” REI’s team determined by the end of 2014 that “we could achieve these objectives by placing a new distribution center somewhere along the Interstate 10 corridor from southern California to Phoenix, Arizona.”

The Goodyear facility complements REI’s existing distribution centers in Sumner, Washington and Bedford, Pennsylvania. Bingle is effusive in his praise for area leaders as REI took on a challenge with the same gusto its active customers demonstrate in taking on mountains, rivers and trails.

“We had some high ambitions for this facility, including making it LEED Platinum and Net Zero,” he says in an email. “Building a 400,000-sq.-ft. automated distribution facility with those standards is a team event, all the way from design to build to the agencies involved and dedicated to the project. I cannot offer enough positive praise to the City of Goodyear executive and operational teams. From the beginning of the project, led my Mayor Georgia Lord, the city worked hard to learn about REI, engage our vision, and support our building objectives. Working for Mayor Lord, City Manager Brian Dalke ensured an almost daily review as to the project status, open issues and collaborative resolution of challenges, including recommendations to improve the outcome.

“Additionally, I must call out the Goodyear Economic Development board,” writes Bingle, singling out Michelle Lawrie (director) and Harry Paxton (manager), who assisted in identifying grant opportunities that REI was able to use during the build process.

“We also developed this site as a Foreign Trade Zone (FTZ), which required considerable system changes, governmental reporting and new processes,” Bingle says. “David Hansen, the commercial officer from the Maricopa County Assessor’s office, was instrumental in assisting us throughout the tax policy impacts. Finally, the entire staff and board of Leadership in Energy and Environmental Design (LEED) was incredibly supportive and helped guide our efforts to achieve LEED Platinum.”

The Goodyear facility was developed with a budget from $72 million to $75 million to deliver total ROI in nine years, while also delivering results in key areas such as culture, brand, technology and sustainability. Now one full year into operation, Bingle says the project “far exceeded original expectations, including meeting our budget and operational date, which will eventually lead to our expected ROI.”

Everywhere we look there are warnings about automation and robotics decimating distribution jobs. Asked to describe his own experience of how the number, type and quality of jobs have evolved over the course of his career and REI’s growth, Bingle says, “At REI, it is our objective to be an employer of choice in all positions — in retail stores, our headquarters and our distribution centers. We strive to create environments such as our purposefully built DC in Phoenix that our employees are proud to call their facility.

“Yes, automation is changing how we work,” he says, “but at REI the employee is still at the center of our culture and more importantly the center of how we differentiate in the retail landscape. The Goodyear facility employees between 180 and 250 employees throughout the year even though it has a highly automatic production environment. We created new specialized jobs like the six highly trained mechanic positions required to maintain our systems. Additionally, many of our processes do not lend themselves to automation, and people will continue to do a lot of this work. When REI entered that Goodyear area, we immediately impacted the community with higher wages, improved total benefits and over 200 new local positions.”

“We’ve already had an impact on projects — both future and ones now underway — throughout Europe and the US for companies focused on sustainability and ROI.”

When the facility opened in December, Bingle said, “To create an impact that extends far beyond the co-op, we chose to open the design of the facility and our doors to the industry, not only to make it easier for other companies to build this technology into their operations, but to actively encourage them to do so.”

Asked about the follow-on from that pledge, he says, “As part of REI’s sustainability journey we strive to open doors, create new conversations and introduce thought leaders to share their experiences with others. It is only natural to our ethos to invite others into the facility so that they may offer their insight while also learning from our journey. The industry as a whole has overwhelmingly engaged in this offer with over 1,000 people completing tours to date. While I do not have permission to release names, we have been happy to welcome CEOs, CFOs and executive leaders from the supply chain divisions of many of the retailers and manufacturers that we all use every day. We’ve already had an impact on projects — both future and ones now underway — throughout Europe and the US for companies focused on sustainability and ROI.”

Big Dots On the Map

Highlights and insights from a sector on the move include: 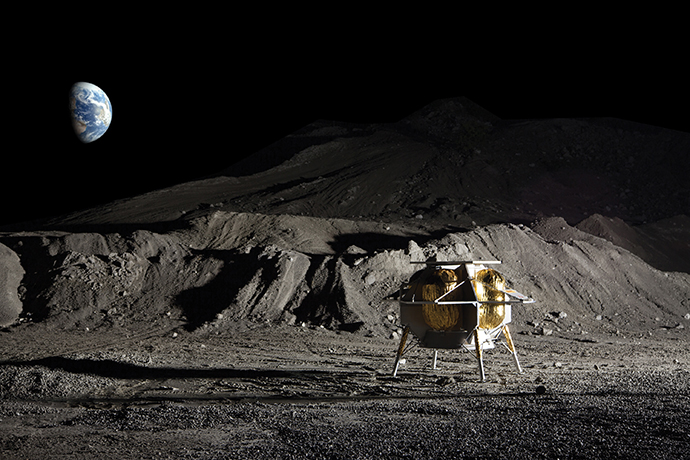 If you thought the cross-dock facility DHL Supply Chain started operating in Dyce, North East Scotland, in July was a bit out of the way, you’re in for a surprise: A few days earlier, DHL announced that the Peregrine Lunar Lander — the first private and commercial lunar mission, developed by Astrobotic and slated to take off in two years — will be transporting small honeycomb-shaped boxes called DHL MoonBoxes that give private individuals a way to send objects up to one-inch in diameter into space.

“For the senders, the contents will be of great immaterial value,” said DHL, “and much like a time capsule, they will be left in a closed container on the Moon after the landing.” The price for sending one hexagonal box measuring 0.5” by 0.125” (roughly 1.27 cm. by 0.31 cm.) will be US$460. Sending a MoonBox that is a full 1” by 1” in size will cost $1,660. DHL is also the company’s earthbound partner, and will transport the Peregrine Lunar Lander by more traditional means from Astrobotics’ home base in Pittsburgh to the launch site in Florida.

In June, DHL released The New Landscape of Supply Chain Real Estate, a report by Lisa Harrington, President of the lharrington group LLC, prepared in collaboration with DHL Supply Chain. The report noted the effects of e-commerce, right-shoring, M&A and technology on supply chain networks.

DHL Real Estate Vice President of Strategy & Business Development Kent Waggoner observed, “In the United States, we are seeing an increase in network reconfigurations to improve service levels and flexibility while minimizing overall network costs." So we called him up to ask for examples. He described a global manufacturer and marketer of consumer products and household goods. 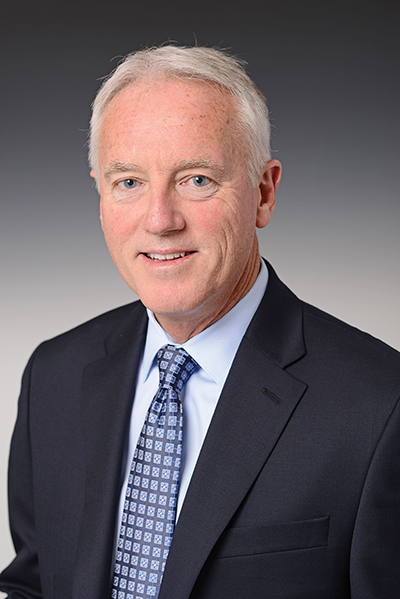 "We have run their operation for them as a 3PL provider for a number of years," says Waggoner. "In the last year or year and a half, there were discussions because they felt their network was no longer optimized. Their supply chain costs were not in the top quartile of their peers. So we undertook with them an analysis of their network and determined that, here in the US, if they were to consolidate their footprint of distribution center [DC] operations from four to three, it could have a pretty dramatic effect on their overall supply chain costs. Plus, if we located one of those consolidated DCs close to one of their manufacturing plants, that would drive additional savings.

"They had facilities in four states — California, Tennessee, Georgia and Pennsylvania. Essentially we recommended that the Georgia and Pennsylvania facilities be consolidated into one eastern US DC, located closer to their manufacturing plant in the eastern US. That would reduce inbound costs to the DC, and if we found the right site, they could go from two to one without incurring additional costs or transit times. They went from four to three in their network, and as a result, it drove a lot of efficiencies and cost reductions. It also required us to go find a facility that was about 1 million square feet, and their center of gravity was not in a market with 1-million-square-foot facilities available. After several months of market search and analysis, we found a land site and ended up doing a build-to-suit for them, and were able to locate it in a market that offered unique economic incentives we were able to negotiate on the customer's behalf."

Unknown to many, the scope of DHL Real Estate solutions extends even to purchasing raw land or vacant buildings and developing logistics campuses. The team has developed over 60 million sq. ft. of space in which DHL operates, and over 300 million sq. ft. in total around the world. Waggoner says the DHL team can work with middlemen and brokers, but its bundled solution is growing increasingly popular.

"Back-office functions like real estate have been pretty much gutted in a lot of companies, and they just don't have the internal resources to handle these complicated projects," he says.