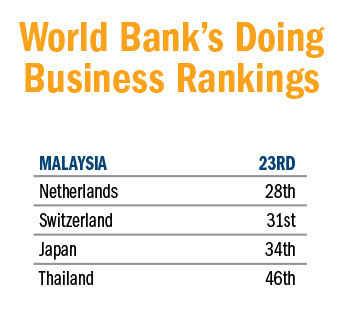 If you pay any attention to global headlines you’d be forgiven for assuming that the wheels were flying off of Malaysia’s economic engine.

The East Asia Forum reminisced about “The Malaysian economy that was,” as if the country’s best days were all behind it.

And The Economist warned that Malaysia was likely to face a “brain-drain” unless more opportunities are created.

Judging by headlines alone one might be forgiven for thinking that the once proud nation ought to simply shut its doors and send its demoralized citizens off to find prosperity in other countries. The media’s occasional habit of embracing the sensational or the salacious easily painted this broad-stroke picture.

The only problem is it’s flat out wrong.

The World Bank’s Doing Business project, which produces a report analyzing regulations that apply to an economy’s businesses during their life cycle, places Malaysia at 23rd in the world, ahead of first-world European economies like the Netherlands (28th) and Switzerland (31st), and far outpacing regional rivals like Japan (34th) and Thailand (46th.)

And the good news truth behind the gloom-and-doom headlines doesn’t stop there.

Those projections alone should be worthy of happy headlines, but apparently Malaysia has also managed to leave most competitors in the dust on the digital landscape. The Harvard Business School’s just-released Digital Competitiveness Index listed Malaysia as a “Break-Out Country,” one of five leading the global pack.

“The most exciting region in the world, digitally speaking, is Asia, with China and Malaysia as exemplars. We can expect to see plenty of investor and entrepreneurial interest in this region; it is critical that the political institutions are stable and supportive,” gushed the report. 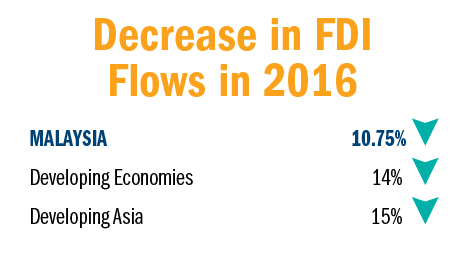 Just days before this issue went to press, the International Monetary Fund upgraded its growth forecast for Malaysia to 4.8 percent from 4.5 percent. Others are more bullish — Morgan Stanley predicts GDP growth of 5 percent, while Nomura’s forecast is for the Malaysian economy to grow by 5.3 percent this year. The ringgit, Malaysia’s currency, is booming, climbing twice as much as the Chinese yuan. Exports reached a record high in the first quarter of 2017, and the country is now home to more listed companies than any other country in the ASEAN community.

Bertrand Russell once wrote, “There is something feeble and a little contemptible about a man who cannot face the perils of life without the help of comfortable myths.”

So set aside your misconceptions. Ignore the myths in the hyped-up headlines. There’s opportunity here, and clearly thoughtful foreign investors are reading between the lines. Malaysia would suggest you do the same. By digging into the real story, you might find something much more significant than a scandal.