Housing and transportation in Greater Boston are key challenges to overcome. But talent always wins. 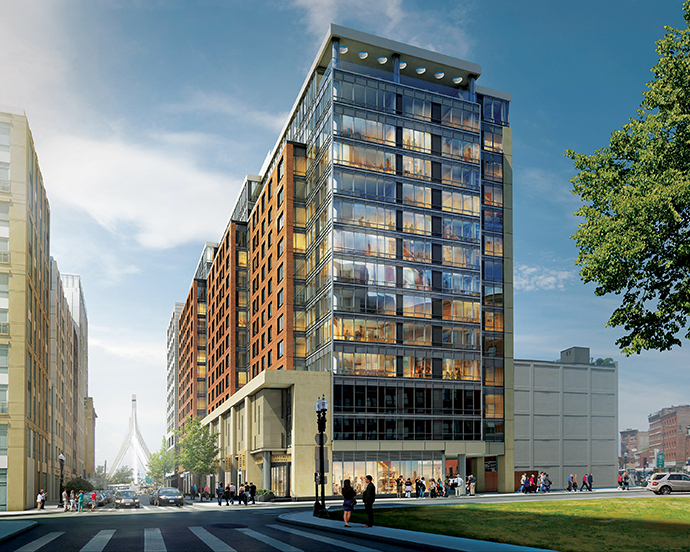 Mayor Martin J. Walsh and Kimberly Sherman Stamler, president of developer Related Beal, in May unveiled The Beverly, Boston’s first 100-percent affordable and workforce housing development to be built in more than 25 years, with 239 units located in the heart of Boston across from North Station. Mayor Walsh's “Changing City: Boston 2030” housing plan calls for the creation of 53,000 new residential units by 2030 — 44,000 specifically for workforce units.
Image courtesy of Related
by BRAIN COHEN AND SUSAN HOUSTON

Construction of General Electric’s future headquarters on the Boston waterfront underscores the draw of Massachusetts’ high-quality workforce, with its deep labor pools in technology, life sciences, clean energy and other clusters. GE is relocating from neighboring Connecticut, adding roughly 800 employees to the downtown mix with an upfront investment estimated at $200 million. Business incentives appear to have been important in the location decision, but were not the pivotal factor, because other states reportedly offered larger inducements.

The commonwealth makes a compelling case for attracting and retaining businesses, and more than three-quarters of companies that have relocated or expanded to Massachusetts in the past decade say they would do so again. That’s one of several findings by MassEcon, a nonprofit economic development organization that teamed with the UMass Donahue Institute in an 18-month study analyzing the strengths of doing business in Massachusetts, factors critical to selecting the commonwealth for business locations, and challenges to economic growth.

A recent report on that study, “Choosing Massachusetts for Business: Key Factors in Location Decision-Making,” offers insight that could help other regions in their own self-assessments and business recruiting. A key take-away for those states, regions and communities is that Massachusetts, like many markets, wrestles with transportation challenges, rising housing costs and other difficulties. Despite those issues, the commonwealth’s pro-business qualities continue to win over employers, with SanDisk, Dassault Systems, IBM and a long list of other firms choosing to locate or expand there in recent years.

A clear theme emerged: Employers come to Massachusetts, and stay, to access its high-quality workforce. That response was nearly universal among employers, whether they were a technology company locating along the I-495 belt to access an experienced workforce, or a life sciences company seeking proximity to Harvard and MIT as a talent pipeline for new hires. In fact, more than 90 percent of respondents cited workforce quality and availability as top factors in their location decisions.

Closely related to that point (and cited nearly as often) is the opportunity to participate in world-class industry clusters. This is especially true for innovation-driven businesses in Greater Boston, where firms benefit from R&D partnerships with area universities and can find venture capital firms with experience in key industries such as life sciences or robotics.

Strong industry clusters also play a part in the rest of the state, especially where a cluster affords access to a skilled workforce. A manufacturing company with its first US location in Western Massachusetts expressly valued the precision-machining cluster there, and had confidence that the local workforce and training providers could generate a steady flow of trained workers. Similarly, a hardware technology company near I-495 expanded there because it could attract skilled workers from the surrounding region.

While markets outside Greater Boston maintain industry cluster strengths in manufacturing, fishing, higher education and healthcare, they tend to trail the Boston area in higher-wage fields such as life sciences, technology, professional services and R&D.

The key for any region is understanding and promoting the area’s strengths through measures that bolster the development and awareness of industry clusters. One example of how Massachusetts has nurtured a specific industry cluster is the 2008 Life Sciences Initiative, which created the Massachusetts Life Sciences Center as part of a 10-year effort to expand the life sciences industry. The legislation and accompanying funding provided broad-based support, including traditional tax credits that incentivize job growth, as well as dollars for learning institutions to develop life sciences infrastructure and programs that help companies recruit talent.

Massachusetts enjoys several advantages from its transportation infrastructure. Companies in some parts of the state view Interstate connectivity as a real strength that allows firms to access customers and suppliers throughout the Northeast, for example. Another frequently cited asset is Boston’s Logan International Airport, which offers hundreds of domestic flights, helps to connect multinational companies with European offices, and is growing the number of direct flights to global locations throughout the world.

In Greater Boston, however, highway congestion, a lack of competitive public transit outside of the urban core, and reliability problems with Massachusetts Bay Transportation Authority services are making commutes more difficult and could eventually compromise the ability of area employers to attract and retain talent.

Transportation challenges exacerbate a housing pinch by limiting workers’ access to housing within a reasonable commute time. Companies statewide cited the availability and affordability of housing as a challenge in their efforts to retain and attract workers. Housing costs limit the living options for low- to middle-income workers in many areas; in Greater Boston, where costs are the highest in the state, that limitation extends to some skilled workers.

Massachusetts, like many markets, wrestles with transportation challenges, rising housing costs and other difficulties. Despite those issues, the commonwealth’s pro-business qualities continue to win over employers.

Creating links between housing and transportation is still a work in progress. That makes it more difficult for companies in outlying areas along the I-495 corridor to attract young workers, who typically prefer to live in the urban, walkable neighborhoods near the metro area’s center. One major employer in the Berkshires related that the lack of walkable, mixed-use projects in that region is hampering its recruiting of younger talent, and it is looking for ways to encourage live-work-play development.

Few metros in the nation are free of transportation issues, and the dynamics of commuting change frequently. Therefore, economic development agencies must keep an open line of communication and idea-sharing with state and local departments to prevent transportation from becoming a deal-breaker in a location decision.

Economic development is beneficial, but complex

Less than half of respondents were satisfied with coordination between local and state officials, however. Interviewees voiced appreciation for the Economic Development Incentive Program and other state incentives, but found the system difficult to navigate, with overlapping and similarly named agencies. A clear roadmap of how best to work with local, regional and state development agencies is a smart investment of time that would likely improve results in many states’ economic development.

Conventional wisdom holds that Massachusetts is a relatively expensive state for doing business, from labor to healthcare and energy costs. Yet businesses in some sectors were more sensitive to those costs than others. Companies that conducted multi-state searches were less likely than firms already in the state to see cost as a major factor in location decisions. This was particularly true of knowledge-based industries, which were more focused on access to Greater Boston’s talent, university partnerships and sector clusters.

Health care and energy costs were more often a major challenge for businesses outside of Greater Boston. And manufacturing firms throughout the state expressed much more sensitivity to business cost challenges than companies in other industries.

Companies that conducted multi-state searches were less likely than firms already in the state to see cost as a major factor in location decisions.

Stark differences between Greater Boston and the rest of the commonwealth stem largely from the concentration of knowledge-based employers in the metro area, where the need for access to available and affordable housing, universities and industry clusters is keenest.     Outside the metro, companies are more often concerned about available labor and energy costs, and less sensitive to transportation proximity. The same may well be true of many states with one or more densely populated metropolitan areas juxtaposed with smaller, less-congested markets in the rest of the state; the latter may be more attractive to manufacturers and other industries with a greater sensitivity to operating costs. Understanding and aligning the top drivers for various industry segments can help position marketing and communications with potential businesses.

By studying recent moves and expansions, Massachusetts has confirmed which of its core strengths to promote most in attracting and growing businesses. In the process, it has identified challenges that will threaten the state’s prowess over time if it fails to tackle issues such as traffic congestion, housing, and public transportation that falls short of employers’ requirements for continued growth. Similar self-assessments can help other states or regions fine-tune their growth strategies and build greater efficiencies into the site selection process.

Siemens Healthineers recently finalized plans to expand its facility in Walpole, investing more than $300 million in the plant and adding as many as 700 employees over the next decade. A subsidiary of Munich, Germany-based manufacturing giant Siemens, the company focuses on innovations for the health care industry.

This project will take advantage of a mix of assistance including property tax incentives, infrastructure outlays and workforce training. It represents a combination of two Massachusetts target industries — advanced manufacturing and life sciences — and includes $735,000 in tax incentives from the Massachusetts Life Sciences Center.