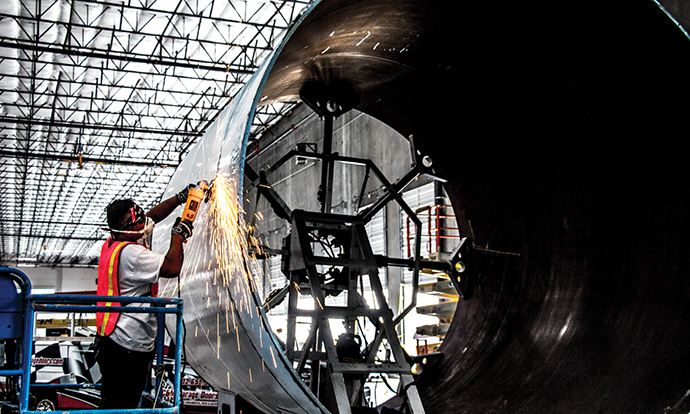 Hyperloop One, being tested in the desert of North Las Vegas, aims to revolutionize the transport industry.
Photo courtesy of Hyperloop One
by GARY DAUGHTERS

Is Las Vegas growing up?

Up and down the glitzy strip of America’s “Sin City,” visitors still court pleasures they might otherwise forgo, with the full expectation that nothing will follow them home. The desert city of non-stop fun just broke its annual mark for tourists.

But Vegas Model 2017 is a seemingly different animal. No more one trick pony. With a push from local leaders, a more mature economy is showing signs of taking root.

“There’s been a substantial amount of economic development since 2011, but very little new in terms of hotels and casinos,” says Jeremy Aguero, principal researcher at Las Vegas-based Applied Analysis.

“In that same time period,” notes Aguero, “there have been 7,500 new businesses created here. You don’t abandon the industry that got you where you are, but rather you seek out multiple specializations. I think Las Vegas is doing exactly that.”

The memory of the Great Recession lingers. Las Vegas, which saw its housing market crash, was ground zero; construction, long a pillar of the local economy, ground to a halt. So, nothing says more about the city’s recovery and current direction than the $1.4 billion in non-residential projects currently planned, proposed or being built there. Among the biggest in the works are the new stadium being constructed for the NFL’s Raiders, a marquee franchise snatched from California, and a major expansion of the city’s convention center. A billion-dollar highway project, the biggest in Nevada history, is well underway.

More telling, though, than those municipally-driven investments are the entries into the market of some of the country’s biggest corporate brands. Amazon, Walmart, Bed Bath & Beyond, sports apparel leader Fanatics, and Jessica’s Alba’s consumer goods concern, The Honest Company, all are building massive distribution centers outside the city’s center. Amazon alone is expected to provide about 1,000 full-time jobs. 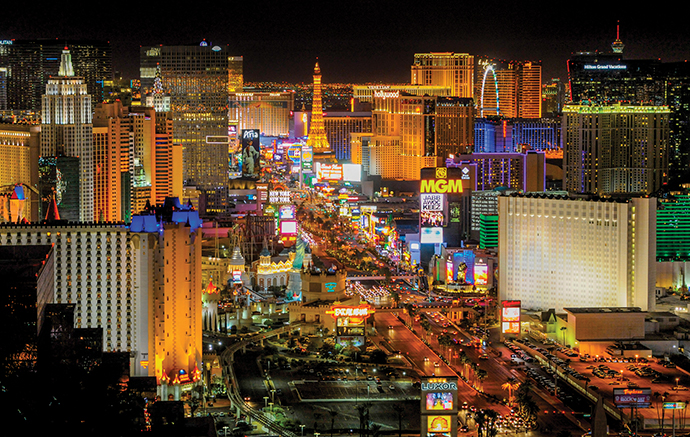 “What we’re expecting over the next two years is a dramatic shift,” says Peterson. “Logistics and manufacturing represent around 50 percent of our pipeline. That is higher than we’ve ever seen it, and that’s a big change for our market. We’re building a community around that.”

As an emerging center for logistics, Las Vegas is a day’s drive from 61 million consumers, say officials at LVGEA. Geographically, it sits at the top of a triangle that includes Los Angeles, a four-hour drive, and Phoenix, just five hours away. Interstate 11, expected to be completed in the spring of 2018, will firm up ties to both Phoenix and Mexico, opening new economic opportunities. McCarron International Airport, a short ride from the Vegas strip, is the ninth busiest North American air traffic terminal with 500 flights a day.

Connectivity to markets has helped Las Vegas lure 11 manufacturing companies this calendar year, accounting for over 1,000 jobs, say local economic developers. Global lottery giant Scientific Games moved its headquarters from New York to Las Vegas in 2015, and now is in the midst of a major renovation of its facilities.

“Las Vegas is riding a wave of industrial big-box development. What we’re expecting over the next two years is a dramatic shift.”
—Jonas Peterson, President and CEO, Las Vegas Global Economic Alliance

“Access to transportation was key for us,” says Todd Clark, the company’s vice president for global facility services. “From railway to ground to the international airport, it’s all very well suited. We’re also close to the international ports in Los Angeles, Long Beach, San Francisco and Seattle, so it reduces our shipping costs.”

Nevada’s tax regime is another prime advantage, one that’s helped to earn Vegas a well-earned reputation for being business-friendly. There’s no personal income tax, no franchise tax, no inventory tax, no inheritance tax and no estate tax. The state-wide sales tax is 8.1 percent.

Last May, Hyperloop One successfully tested its experimental, magnetic levitation transporter in a 1,640-foot tube in the desert outside Las Vegas. Hyperloop One, being designed to hit speeds of up to 750 mph, aims to revolutionize transportation.

With less fanfare, but equally significant, Las Vegas has opened its streets to autonomous vehicles, and is investing in connected infrastructure to further enhance its posture. In January, the city hosted live tests of the French-made Navya Arma shuttle, claiming it was the first example of a completely autonomous, fully electric shuttle being driven on public roads in the US. In June, Nevada Governor Brian Sandoval doubled down on earlier moves to promote autonomous driving technology by signing legislation to strengthen the state’s position in the frenzied R&D race.

“We have created the opportunity for innovative companies to not only test and operate their autonomous vehicles in our state, but also to conduct the research and development that will move driverless technology from exciting concept to reality.”
— Nevada Governor Brian Sandoval

“We have created the opportunity,” said Sandoval, “for innovative companies to not only test and operate their autonomous vehicles in our state, but also to conduct the research and development that will move driverless technology from exciting concept to reality.”

Southern Nevada also is bidding to become a magnet for unmanned aerial vehicles, owing in large part to the state’s designation as one of six UAV test sites in the country. UAV developers with a presence in Las Vegas include Unmanned Systems, Inc., Arrow Data, Skyworks Aerial Systems and government contractors such as National Security Technologies, Bigelow Aerospace and Arcata Associates.

Welcome to the Big Leagues

For a growing city of aspirations, nothing says success as much as the presence of a top-tier sports franchise. Las Vegas is getting not one, but two. The Las Vegas Golden Knights of the National Hockey league will take the ice in September at T-Mobile Arena, built on the strip at a cost of $375 million.

The Raiders are to land in 2020, bringing with them the potentially lucrative cred conferred by the NFL. Feelers for season tickets, say local officials, indicate that up to half of the Raiders’ support will come from out of town, which means tens of thousands more guests to fill the famed strip and keep the wild party going.