With Wilmington leading, Cape Fear steps out of the shadows. 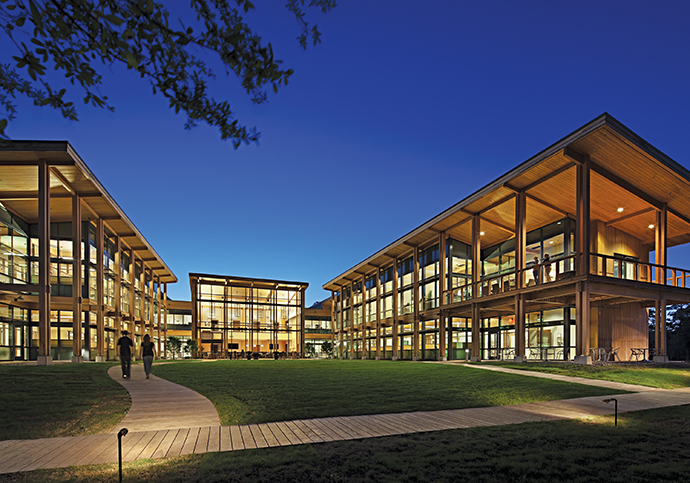 Wilmington’s Live Oak Bank, founded in 2008, focuses on innovation in finance and technology and has total assets of $1.75 billion.
Photo courtesy of Live Oak Bank
by GARY DAUGHTERS

Bob Jenkins, 82, is a lifetime Wilmingtonian. An architect and preservationist, Jenkins in 1977 purchased a two-story building at 12 Market Street in Wilmington’s historic downtown district, using the lower level for work and the upstairs as his living quarters. By Jenkins’ account, he was the first full-time resident of a riverside enclave that now sprouts restaurants, walkers and cyclists, a breezy boardwalk at the Cape Fear River, and not least, Jenkins’s legacy: urban living space.

In Jenkins’ rendition, downtown Wilmington wasn’t always the enviable piece of real estate it is today.

“When I bought 12 Market Street in the ’70s,” says Jenkins, “my neighbors were 14 bars, seven dirty-bookstores and four topless joints.”

While Wilmington, seat of New Hanover County, has evolved dramatically, it took a big hit from the Great Recession, and major projects occasionally have moved with due deliberation. Witness the seven years it’s taken to build the 200-room Embassy Suites (completion this year), an essential companion to the $62-million Wilmington Convention Center, which opened in 2010.

But bolstered by a palpable sense of resolve, Wilmington and surrounding New Hanover County, plus neighboring Brunswick, Columbus and Pender counties, are rolling out the welcome mat for the many new arrivals demographers predict.

“You can feel the shift in our community happening in very tangible ways,” says Sean Ahlum, Director of Business Development at CastleBranch, one of the nation’s largest background screening and compliance management companies. “If I were an organization looking to relocate to the area, I’d be very interested in that economic shift and being on the front end of that tidal wave.”

Targeted education to foster workforce development, anchored by the University of North Carolina at Wilmington (UNCW), has long been one of Cape Fear’s core assets. Ongoing upgrades to the region’s commercial infrastructure include $200 million in improvements to the Port of Wilmington and an expansion by the area’s primary healthcare anchor, New Hanover Regional Medical Center. Two bypasses are easing downtown congestion, and transport links to Raleigh, Charlotte and Charleston, South Carolina, are firming up.

“We’re booming,” says Wilmington builder Rob Zapple, a New Hanover County commissioner. “As far as residential, our multi-family living units, apartments, townhouses and condos are all taking off. We have over 3,000 units coming on line in the next 12 months.”

Of the newer, harder-charging Wilmington community, Bob Jenkins says plainly, “I love it. I love it because the young people are moving in.”

Thirty-something Kurt Taylor is CEO of the increasingly visible and valuable Untappd, a Facebook/Pandora-like network of beer enthusiasts and brewers. Untappd employs about 60 tech-savvy workers, many of whom live in downtown Wilmington and walk to Untappd’s three-story red brick headquarters a block from Bob Jenkins’ old digs.

“We started here and we’ve been fortunate to have a talent pool from University of North Carolina at Wilmington that we’ve been able to pull on,” says Taylor.

With Untappd going through another expansion, construction workers abound, as does an atmosphere of casual yet unmistakable focus. CEO Taylor, in shorts and golf shirt, negotiates a tour that leads past a young employee laying on the floor at a meeting. “We’re a startup,” he shrugs.

A startup that, according to Taylor, witnessed subscribers jump from 3 million to 6 million over the last 14 months and saw significant revenue growth the past half-year. Untappd’s relationships with brewers and brew pubs are thus expanding, and, according to Taylor, “We have tons of revenue streams going.”

Taylor’s family has roots in the city, but there’s a distinct tone of the businessman speaking when he declares, unbidden: “We wouldn’t be anywhere but Wilmington.”

Too Much Vigor to Retire

There’s a story that goes around about the wealthy, successful business executive who retires to Cape Fear’s beaches, quickly tires of golf and reboots the business career, just for kicks.

“Cape Fear has traditionally been a retirement and tourist type place,” he says. “So, it attracts people who have had very successful executive-type careers and they end up coming here and bringing their investment dollars. But they also bring their Rolodexes. They bring their knowledge, skills and talent. They’re not ready to sit back on the La-Z-Boy yet.”

Ahlum could be describing Chip Mahan, 65, who in 2008 started Wilmington’s Live Oak Bank with the notion of challenging brick-and-mortar branches in favor of financial services offered via the cloud. Less than 10 years since Mahan founded the enterprise, Live Oak is a public company with $1.75 billion worth of assets and an award-winning headquarters built of abundant glass and East Carolina cypress. Live Oak employees, even top executives, wear shorts to work, and the facility offers free dog care in shaded runs by a pond.

“You can’t buy culture,” says Neil Underwood, president of Live Oak Ventures, a unit of the bank that invests in financial tech companies. “It goes deeper than the casual work environment. We’ve hired a head of corporate health. We run classes out of our gym. Things like that send a message, and the message is ‘You are very important to us as an employee.’ ”

Well-known entities such as GE, Verizon, PPD and Alcami all have presences in the Cape Fear region. Wilmington’s Corning Plant, opened in 1979, was the world’s first optical fiber manufacturing facility. Michele Holbrook, Corning plant manager, says today the plant can “produce as much fiber in one day as it took us a year to produce when we first started.”

“The co-working space allows us to have the community aspect we want,” says Richard McGravie, vice president for business development at CastleBranch. “And with the incubator/accelerator, the idea is to try and attract and grow smaller companies who may want to have access to some of our markets.

“I think the stuff we’re proudest of,” he says, “is the community aspect — how many events we have here for the community, what it means to have people meet other people, to learn things and to grow as a total community of Wilmington.” 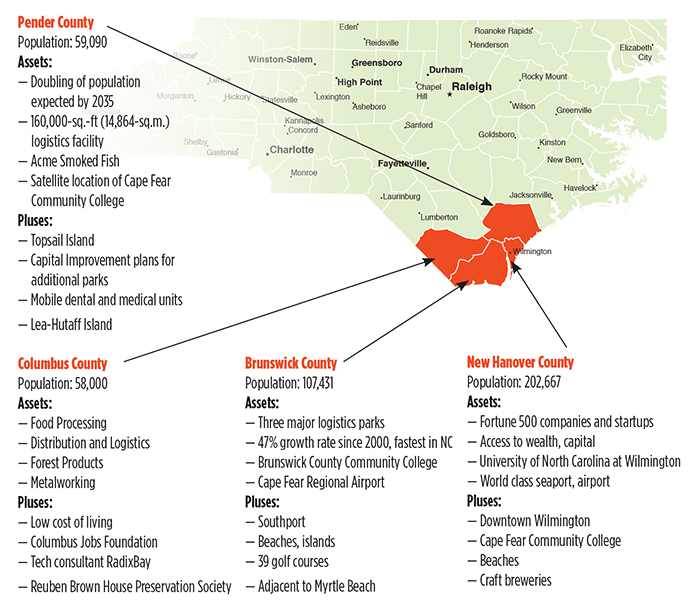