CHINA Slowing Down? Not Really. 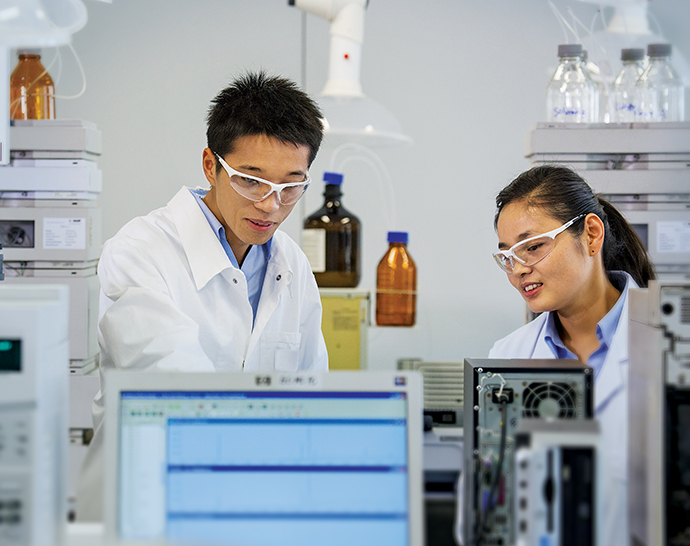 Yanqiu Gong (left) and Bing Cheng discuss analytical data at the Material Physics and Analytics Lab on BASF’s Innovation Campus in Shanghai, not far from where the company in March announced an expansion in a plastics additives plant at its Caojing site.
Photo courtesy of BASF
by ADAM BRUNS

The strongest growth prospects for plastics and chemicals are in the United States, where shale production has driven down natural gas prices, notes Daniel Levine, Oxford Economics’ practice leader in location strategies, in the 2017 World’s Most Competitive Cities report, released this year by Site Selection publisher Conway Inc. with analysis from Oxford, EY and Tractus Asia. “Many of the proposed projects are on hold as investors wait for more clarity regarding future oil prices,” he writes.

That is the case for some non-oil-related projects as well. In May, the Port of Antwerp in Belgium put out a new request for proposals after Saudi Arabia’s Energy Recovery Systems was unable to fulfill requirements by milestone dates imposed by the port authority on a planned $4-billion complex in the Churchill Industrial Zone that would have turned waste products from other port tenants into chemical fertilizer.

But a number are moving ahead, including Shell’s long-anticipated cracker complex in Pennsylvania and multiple projects along the Gulf Coast, including a tie-up between SABIC and ExxonMobil for what will be the world’s largest steam cracker plant near Corpus Christi (see the May 2017 issue of Site Selection). So it’s no surprise to see Houston and Baton Rouge at the top of the North America rankings on these pages, which feature the top five metro areas for each world region.

Clusters with critical mass also continue to form in Bogotá, São Paulo and Campinas; in the Polish cities of Katowice and Lodz; and in Shanghai, Suzhou, Singapore and Jakarta (where Lotte Chemical Titan is investing $4 billion) in the Asia Pacific. Cities in Spain and Portugal lead the way in Western Europe, and Abu Dhabi, Cairo and Johannesburg top the charts in Africa & the Middle East.

Production of soaps and detergents in the developed economies should remain strong, given solid consumer spending, says Levine.

The rising number of middle-class households in the developing world (China, Mexico, and India) should support increased investment in this industry in those locations as well, including in and around our chart-toppers Tijuana, Monterrey and Pune. Meanwhile, China has attracted the lion’s share of plastics and chemicals projects since early 2016, according to the Conway Projects Database, including a new expansion at its plastics additives plant announced in March 2017.

“Asia, and particularly the Chinese market, offer significant growth opportunities, driven by diverse applications including packaging, construction, consumer goods, automotive and many more,” said Hermann Althoff, senior vice president of BASF’s Performance Chemicals unit in Asia Pacific. “Located within the Caojing complex, it will also benefit from its proximity to our regional application center in Shanghai that provides technical support to polymer producers and to the converting industry within the region.”