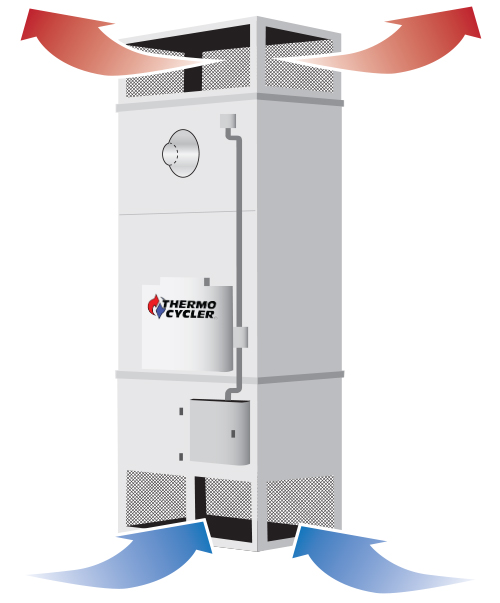 John Davis had a big challenge.

Davis, a facilities manager for Letterhead Press in New Berlin, Wisconsin, was getting energy bills that topped an annual quarter of a million dollars. Letterhead’s cavernous

“It was during the recession in 2009,” says Davis. “Business was down and we were trying to cut costs. Our electricity bill was about $270,000 a year, and one of the biggest components of that was our air conditioning.”

Thermo-Cycler manufactures a range of energy-efficient “air turnover” systems that circulate and utilize ambient air, including the warm air that collects at the top of tall, open buildings.

Drexler went to work. He put together a plan employing a mix of Thermo-Cycler products: four 20-ton chilled water air handlers plus three air turnover towers, two of which came equipped with gas heaters for the winter. The compact array of components allowed Letterhead to clear the roof of all that tonnage.

“They also had an issue with humidity,” says Drexler. “These units, since they pull moisture out of the air, helped lower their humidity to the point where it actually helped their production process. In the end, they were able to lower their temperature, lower their high humidity levels and decrease their entire cooling load by 140 tons.”

Not unimportantly, says Davis, Letterhead cut its energy costs by 25 percent, or more than $65,000.

“It’s a much more uniform climate,” Davis tells Site Selection. “It’s much more energy-efficient and much more comfortable for our employees. It’s been one of the better investments we’ve made.”

Large industrial buildings are typically outfitted with ceiling-hung unit heaters, infra-red spot heaters, boilers or direct-fired space heaters. With no outside means of circulation, warm air becomes stagnant in a layer below the roof, a phenomenon known as air stratification.

“Air stratification,” says climate engineer and consultant Felix Goto, “is one of the biggest problems there is in large, open buildings.”

Goto, president of Michigan-based US Energy Engineers, is a big supporter of the air turnover concept.

“You’re taking warm air off the ceiling and it’s blowing back through the building. So you’re taking the air that’s already heated and putting it to use. You get a consistent temperature throughout the building.

“It’s primarily used for heating,” says Goto, “but even in the summer months you can distribute air in the same manner that you do in the winter, so that cooler air circulates throughout. It’s much more efficient than conventional methods. All these open-air facilities should be using air turnover. In the long term it’s a big money saver.”

Bob Weaver, an owner of Anchor Construction in Granger, Indiana, has worked with Thermo-Cycler on scores of industrial projects around the country.

“It’s all about air rotation,” says Weaver. “Some of the units we use are just circulating air and some are actually heating units. We’ll do a combination of both. We’ve been able to get by with minimal heat input because of the capability of these units to move the air around and make it consistent. They’re superb units,” says Weaver. “They’re quiet, reliable and don’t have maintenance issues.”

Founded in 1984, Thermo-Cycler serves clients from Maine to California, with a heavy regional base stretching from Nebraska to the Upper Midwest.

“One of the big things we do that’s different from other manufacturers is we offer our customers a satisfaction guarantee,” says Greg Kelver, Thermo-Cycler’s president. “When we look at a project we will guarantee that customer complete satisfaction. It goes beyond the product warranty.

“Something else we do differently,” says Kelver, “is that every job we do, we do heat loss calculations and provide that information to the contractors and end-users so they know what they’re getting with our systems. We’re actively involved directly with the contractors on every project. We’re kind of a turn-key solution.”

That approach has made a big fan out of Ron Nolland. Nolland, project manager for Luck Builders in Plattsburgh, New York, has worked on more than a dozen projects with Thermo-Cycler.

“It’s very rare that you get a supplier like that,” says Nolland. “I’ve been in this business for a long time, and I’ve done business with a lot of good suppliers. Thermo-Cycler is absolutely at the top of that list.”

“Thermo-Cycler,” says Weaver, “is one of the best kept secrets in the country.”