The resurgence is real. If there’s a town that can muscle the rest of the deal, it might be the Motor City. 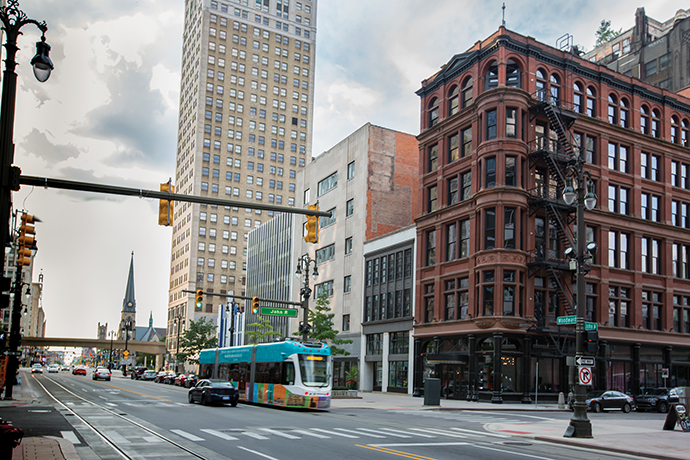 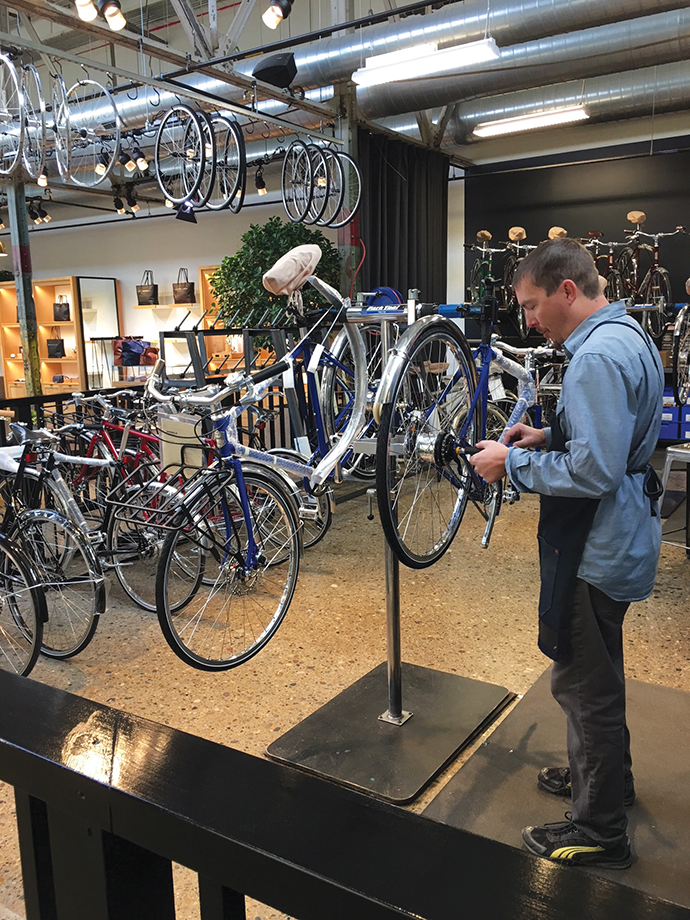 Shinola, founded in 2011 in Detroit’s Cass Corridor, has since expanded to 30 locations in the US, Canada and Europe.
Photo by Gary Daughters

Detroit’s historic David Whitney Building, once a treasure at the city’s gateway, had fallen into such dramatic disrepair that during the bleak days of municipal bankruptcy, it had trees growing from it. At the time a symbol of Detroit’s disastrous decline, today the Whitney is emblematic of the Motor City’s accelerating rebound.

It’s a story that’s being repeated, with differing twists, up and down Woodward Avenue, the city’s north-south spine, where at any given dawn, sleepy-eyed Detroiters are out exercising and walking their dogs, just like any normal city. The sidewalks are wide and clean.

Comerica Park, home to baseball’s Tigers, and Ford Field, the indoor turf of the NFL’s Lions, anchor the city’s center. Only now, it’s a big-league trio, with the recent launch of the uber-impressive $863-million Little Caesars Arena for the NHL’s Red Wings and the NBA’s Pistons, recently returned from the suburbs. Among major projects in the skeletal phase are Little Caesars Restaurant Company’s new corporate headquarters and the Mike Ilitch Business School at Wayne State University, named for the late Tigers owner and Little Caesars founder remembered in Detroit as “Mr. Ilitch.” Look north from the Whitney’s upper floors and behold a panorama of steel, churning dirt and ambition.

None of this is happening by accident.

“They’re doing a lot of good things,” says Larry Moretti, a Pennsylvania-based site selector who took part in “Detroit is on the Rise,” a two-day forum in late October hosted by the Detroit Economic Growth Corporation. Moretti, principal of LFM Corporate Location Solutions, is upbeat about what he sees. “They’ve got a lot of challenges going forward, for sure,” Moretti tells Site Selection, “but they’ve got momentum.”

Tracey Hyatt Bosman, managing director of Biggins Lacy Shapiro, also speaks of forward movement: “There’s a lot of development, a lot of excitement, a lot going on from a livability standpoint. That will continue to drive the business side.”

A Real Rate of Return

The year that just ended has been a good one for Detroit, with some $60 million in capital investment and over 1,000 new jobs facilitated through DEGC, according to Peter Chapman, the organization’s executive vice president. Site Selection’s Conway Projects Database identifies $3 billion worth of corporate expansion projects throughout Detroit’s five-county, core-based statistical area since January 2017. The highlights go beyond sheer numbers:

The gears have shifted. Detroit is coming along faster than a lot of people might realize.

“Businesses are seeing a normal rate of return on investments here,” says Mark Denson, DEGC’s director of business development. “It used to be that a lot of investment was altruistic, philanthropic, but now people are seeing the real value of being in Detroit.”

‘Squarely in the Cool’

The above-ground QLine (formerly known as the M-1 Rail), launched in May at a cost of $99 million, connects Gilbertville northward to Midtown, and runs straight up the gut of Detroit’s immediate future: “District Detroit,” the sprawling project you can see as you look out from the Whitney, a 7.2-sq.-mile (18.6-sq.-km.), stab at mixing living and working, all with proud deference to Motown. It’s Detroit’s next big hope, with completion expected in 2021.

“I think what’s really cool about where Detroit is going,” says Hyatt Bosman, “is that even as they re-invent entire parts of town, they’re working really hard to preserve their architecture and the feel and edginess of Detroit. I think that’s going to put them squarely in the cool sector with the millennial generation.”

“There’s a lot of development, a lot of excitement, a lot going on from a livability standpoint. That will continue to drive the business side.”
— Tracey Hyatt Bosman, Managing Director, Biggins Lacy Shapiro & Co.

Shinola, in the District’s Cass Corridor, is squarely in the cool. Its flagship store on West Canfield Street mixes gritty brick and metal with natural sunlight that adds extra dazzle to Shinola-made watches, handbags, headphones, turntables and bicycles, the latter assembled right there on the retail floor.

Since its 2011 founding in Detroit, Shinola’s brand has gone international, and the Cass Corridor, thanks to Shinola, has trended steadily upward. Shinola’s bearded president, Jacques Panis, whose bona fides include having been a professional ticket scalper, views his adopted home, with no small amount of conviction, as “the most exciting city on the planet.

“There’s a very powerful workforce here,” Panis tells Site Selection. “It’s made up of people who understand manufacturing, who understand quality, who understand craftsmanship and have tenacity. We would not be where we are today with Shinola had we tried this anywhere else in the world.”

Fan out from the District, though, and there’s the other Detroit. Unlike Woodward Avenue, there’s no millennial swagger. No Dan Gilbert, no Shinola. No Lululemon, Whole Foods, Under Armour, Warby Parker or Nike.

In a city whose population hemorrhage has only recently leveled off in the 670-thousands, a ride west on Michigan Avenue toward Dearborn, just as one example, can make a visitor wonder, amid block after battered block, what actually used to be there. Rogelio, an Uber driver, grew up in these neighborhoods and remembers summer Sundays at the municipal park, his dad and uncle catching the catfish his mother would grill on the spot.

“I don’t see it coming back,” he says. His childhood home is gone, and his school is gone, too. Rogelio has moved to suburban Lincoln Park, where he manages a pita factory and drives Uber once a week to help support his extended family; he sprang to take his niece to see Detroiter Kid Rock when he opened Little Caesars.

“He brought it,” Rogelio remembers, as he wheels his immaculate KIA past a block of abandoned buildings. He wants to open a restaurant, and he has some ideas.

“This is a long process,” says DEGC’s Chapman. “That’s not what people who live in under-invested neighborhoods want to hear. But you build around your core. And as downtown becomes more competitive, more popular and more expensive, the progress moves out into other parts of the city.”

Today’s Detroit rewards imagination, guile, feel for community, and the willingness to take a chance. Mark Denson speaks of what’s unfolding like the Detroiter he is.

“We’re ‘Made in America,’ ” says Denson. “We build things. We’re grit and determination. And every time we’ve faced the fight, we’ve won.” 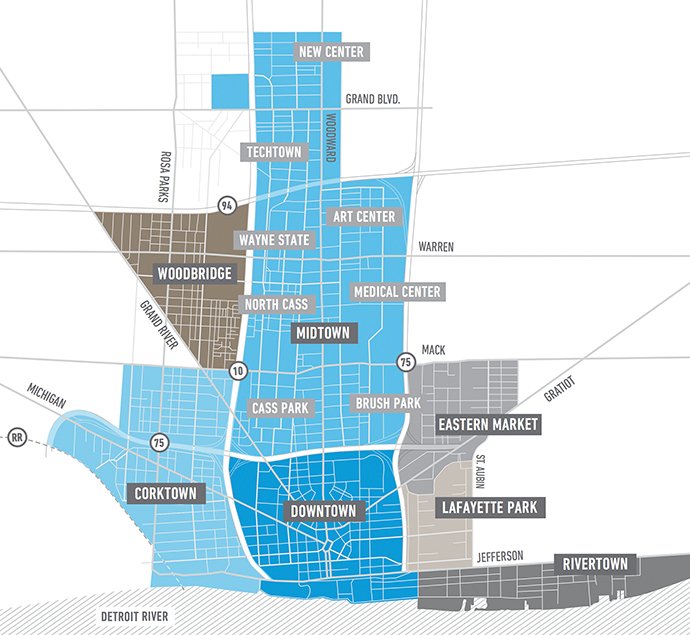