Even MORE ROBOTS Are Coming

Asian nations and Germany are among the leaders blending automation and human beings into a new manufacturing mindset. 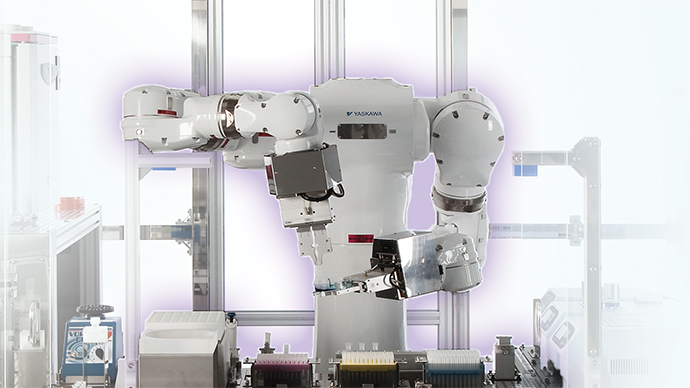 Could the global war for talent really be a global war for robots? If so, the consequences may not be as dire as replacing you and your colleagues with artificial intelligence and machines, but refreshing your skills to work better with those machines.

Let there be no doubt: The robots are still coming, part of a wave of advanced manufacturing technologies advancing into every sort of workplace.

The International Federation of Robotics (IFR) reported in June in its World Robotics Report 2018 that global sales of industrial robots reached a new record of 380,550 units in 2017 — an increase of 29 percent compared to 2016's 294,300 units. China saw the largest growth in demand for industrial robots, up 58 percent. 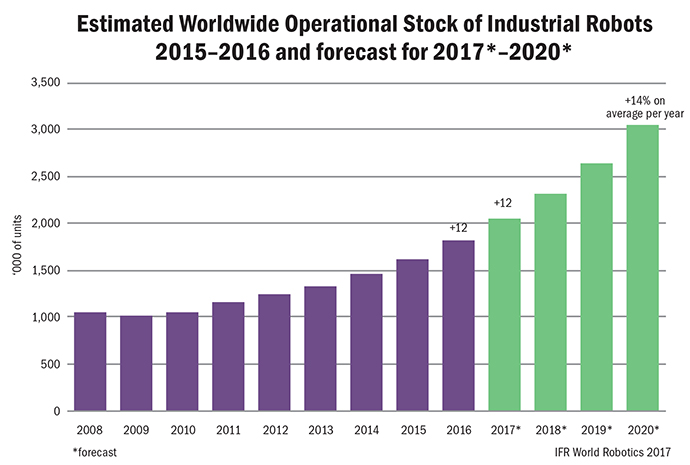 The automotive industry continues to lead global demand for industrial robots: "In 2017, around 125,200 units were sold in this segment — equivalent to growth of 21 percent," the IFR reports. "The strongest growth sectors in 2017 were the metal industry (+54 percent), the electrical/electronics industry (+27 percent) and the food industry (+19 percent)."

"The growth of industrial robots continues at an impressive pace worldwide," said Junji Tsuda, president of the IFR. "Key trends such as digitalization, simplification and human-robot collaboration will certainly shape the future and drive forward rapid development." In the future, says the IFR, "human-robot collaboration will support the flexible production of small quantities with high complexity," including at increasing numbers of small and medium-sized companies.

But won't those machines truly be taking away our jobs? Results of a separate survey of 7,000 employees in seven countries, conducted by worldwide automatica and released a few weeks before the IFR numbers, show that 67 percent of employees believe that robotics and automation offer the opportunity to qualify for higher skilled work. The technological change calls for targeted training and further education for employees, says the IFR, as operational stock of industrial robots is anticipated to more than double between 2014 and 2020 to more than 3 million.

"Companies and governments must collaborate to ensure workers have the skills that the technological change requires," said Tsuda in May, highlighting Singapore's SkillsFuture initiative. There, employers in the city-state are asked to spell out the changes, industry by industry, that they expect to happen over the next three to five years, and to identify the skills they will need. Their answers are used to create industry transformation maps designed to guide individuals on where to head. Since January 2016 every Singaporean above the age of 25 has been given a $345 credit that can be freely used to pay for any training courses provided by 500 approved providers, including universities and MOOCs (massive open online courses). 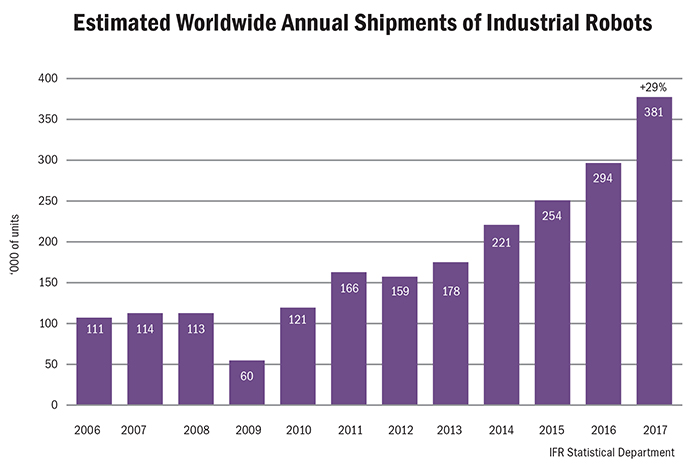 Singapore is among the most automated countries when measured by robot units per 10,000 employees. The Top 10 in order:

Again, China is the lead dog: Between 2013 and 2016, the density rate rose from 25 units to 68 units. Today, China's robot density ranks 23rd worldwide. "And the government intends to forge ahead and make it into the world's top 10 most intensively automated nations by 2020," reported the IFR in February. "By then, its robot density is targeted to rise to 150 units." And in case you were wondering, domestic use is not the end goal. "Furthermore, the aim is to sell a total of 100,000 domestically produced industrial robots by 2020."

The Chinese government intends to forge ahead and make it into the world’s top 10 most intensively automated nations by 2020.

Who makes the most robots? Japan, ranked No. 4 in robot density, is the world leader in producing them. "The production capacity of Japanese suppliers reached 153,000 units in 2016 — the highest level ever recorded," says the IFR. "Today, Japan´s manufacturers deliver 52 percent of the global supply."

At 631 units per 10,000 employees, the Republic of Korea's robot density exceeds the global average by eight-fold. That density combines with other factors in South Korea's favor when it comes to the multifaceted world of advanced manufacturing. 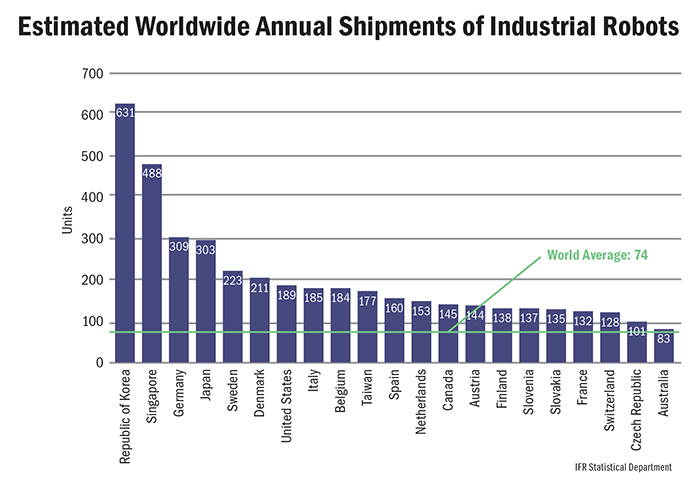 Based on 52 qualitative and quantitative indicators, The Economist Intelligence Unit and ABB recently ranked 25 selected countries on their readiness for the future of work in terms of robotics and artificial intelligence, in a report entitled "The Automation Readiness Index (ARI): Who Is Ready for the Coming Wave of Innovation?"

South Korea, based in part on its No. 1 rankings in labor market and education, was No. 1 overall, followed by Germany and Singapore. The bottom three were Mexico, Vietnam and Indonesia.

Europe's most automated country is Germany, ranking third worldwide with 309 units per 10,000 employees. The IFR pointed out in April that, at the same time, the number of people employed in Germany reached 44 million in 2017, the highest figure since reunification. "The rapid spread of industrial robots hasn't made a dent in employment figures," the IFR insisted. "Today, new tasks have been created for the workforce alongside [ones] performed by machines.

The Germany study by the Centre for European Economic Research (ZEW) on behalf of the German Federal Ministry for Education and Research (BMBF) estimates that further automation and digitalization in industry will generate a 1.8-percent rise in employment by 2021.

"This development tallies with experience from the 1990s onwards with the computer boom," the IFR stated. "The large-scale use of IT in companies did render traditional processing jobs superfluous. But according to calculations by the ZEW, from 1995 to 2011 employment rose by just under 0.2 percent per year." 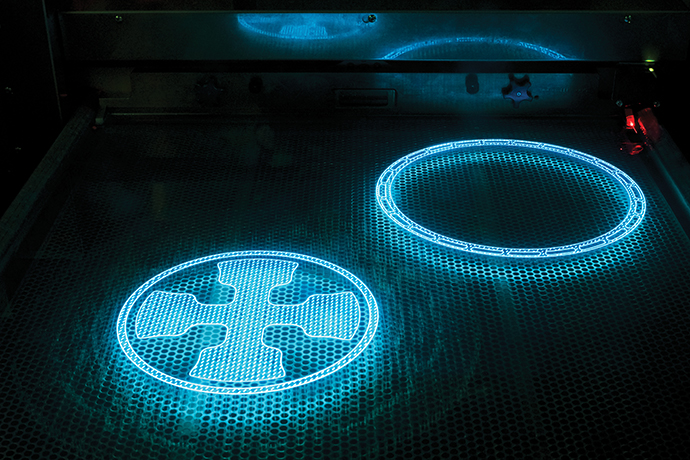 The "Exponential Technologies in Manufacturing" study just released by Deloitte explores how exponential technologies — those that enable change at a rapidly accelerating, nonlinear pace facilitated by substantial progress (and cost reduction) in areas such as computing power, bandwidth, and data storage — are transforming the future of manufacturing.

In addition to input from Singularity University and a number of startups and experts, among the more than two dozen senior executives Deloitte talked to were leaders from companies that are part of the U.S. Council on Competitiveness, including Deere & Company, Intel, PepsiCo, Lockheed Martin, Boeing, United Technologies, Exelon, Dow Chemical and Hewlett-Packard. Among the findings:

"Innovation enabled by exponential technologies can help manufacturers grow faster, be more agile, and unlock new forms of value. But while exponential technologies' roles are more important than ever, the pace of their adoption is seen as relatively slow among manufacturers. Interviewed executives cite several barriers, including structural and cultural challenges, regulatory burdens, talent constraints, and leadership mind-set."

"Exponential technologies are also dramatically changing the 'what' (technology and automation), 'who' (talent and the open talent continuum), and 'where' (workplaces, physical location) of work across manufacturing organizations. As manufacturers look to increase their pace of change and transformation, they are not only leveraging internal assets in new and different ways, but also turning more often to resources outside of their walls, tapping into the broader ecosystem, as there are clear advantages to being close to where innovation is occurring."

"Business and government research and development (R&D) activities, along with venture capital (VC) investments, also play a critical role in company- and country-level innovation pipelines and ecosystems … Across the global manufacturing competitiveness landscape, U.S. companies lead in R&D spending, but other countries, especially China, are quickly catching up." (See chart.)

"While there are many potential pathways to success, a Digital Manufacturing Enterprise (DME) that has higher leveraged assets, focuses on product platforms to engage customers, and leverages exponential technologies can be highly successful."

Among other factors in manufacturing's favor, Deloitte asserted, are a 9.7-year average tenure for workers (the highest of any sector); one of the lowest employee turnover rates (2.3 percent); and the highest average wages ($81,289) across all private-sector industries. 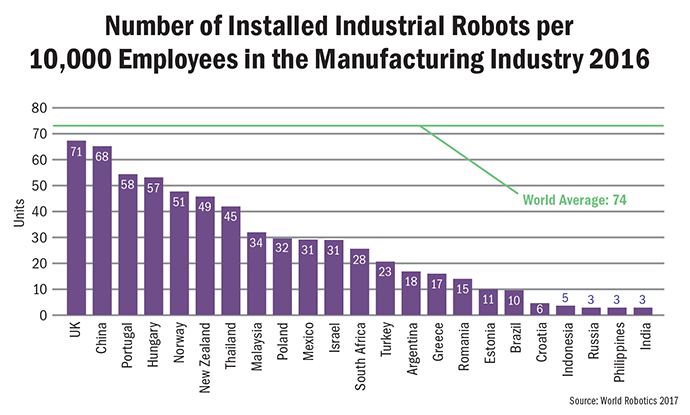