When You Say Bud 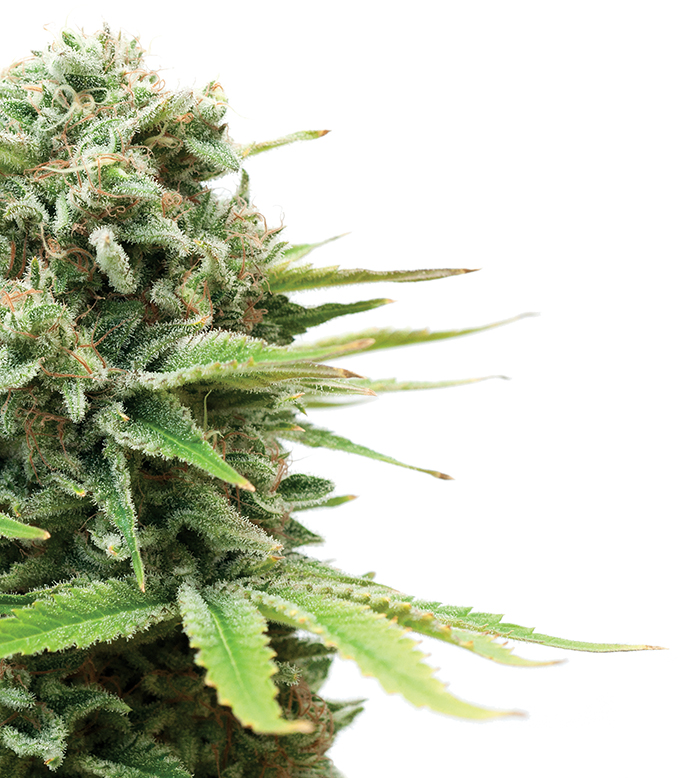 The creator of the wildly popular Blue Moon beer is going in for a second act.

In March, master brewer Keith Villa and his wife, Jodi, founded Ceria Beverages, an enterprise devoted to brewing the world's first beer infused with THC, the psychoactive ingredient in marijuana. Ceria is named for part of the University of Brussels, in Belgium, where Villa earned a doctorate in brewing science before going on to create Blue Moon. Villa, whose new company is based in Arvada, Colorado, believes non-alcoholic beer with THC is an idea whose time has come.

"I'm hoping it will be even bigger than Blue Moon," Villa tells Site Selection. "The market for cannabis is on the brink of exploding. We're almost in the same place we were back in 1995 when I launched Blue Moon, where in the beer world people weren't really quite sure what a craft beer was. And eventually Blue Moon grew to become the biggest-selling craft beer brand in the U.S."

If he has his way, Villa's new brew will be on the shelves of dispensaries in Colorado by the end of the year. The yet-to-be named line of beers, says Villa, "will offer a whole new sensation. Our primary market will be the recreational users who want to experiment with it. Or maybe they don't like the taste of alcohol or can't drink alcohol, but they really like a great-tasting craft beer and want that pleasurable sensation. Those are the folks we are really going to target with our marketing, and offer them something that's unique." 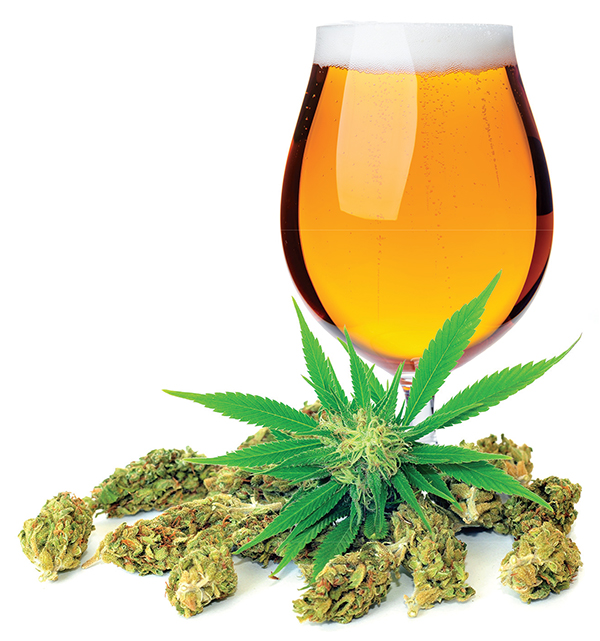 Federal law prohibits brewers from using marijuana in their beers. Villa's brew, because the alcohol will be siphoned out of it, is being conceived to skirt that ban, even as marijuana itself remains federally illegal. Recreational marijuana currently is permitted in nine states plus the District of Columbia.

A Change of Heart

Villa says that since his retirement from Molson Coors early this year he's become a believer in marijuana's benefits.

"Initially I was against marijuana and cannabis," says Villa, "mainly because I grew up in a world where people referred to it as an evil drug that was good for nothing except getting people stoned. I started reading articles about veterans coming back for duty and they would have PTSD and use cannabis to successfully treat their stress disorder.

"Then I read about cancer patients who were using it to get over their nausea from their treatments or to regain their appetites," he continues. "Then I also read about mothers who were using it for their kids with epilepsy to decrease or eliminate seizures. I started seeing there was something there, and the more I read the more I saw that this was a plant that potentially has a lot of benefits."

To help dial in the right sensation, Ceria has partnered with Colorado-based ebbu, which specializes in extracting and analyzing marijuana compounds. The company's technology allows it to provide specific feelings, ranging from relaxation to euphoria.

"There are over 100 compounds in cannabis that do different things, such as give people the giggles, give them the munchies and so forth," says Villa. "These compounds have not been isolated and identified. Our partners at ebbu are working on isolating these different components and identifying what they do so that we can make beers with a little bit of THC and with the desired sensation such as happiness or a relaxed state and so forth." 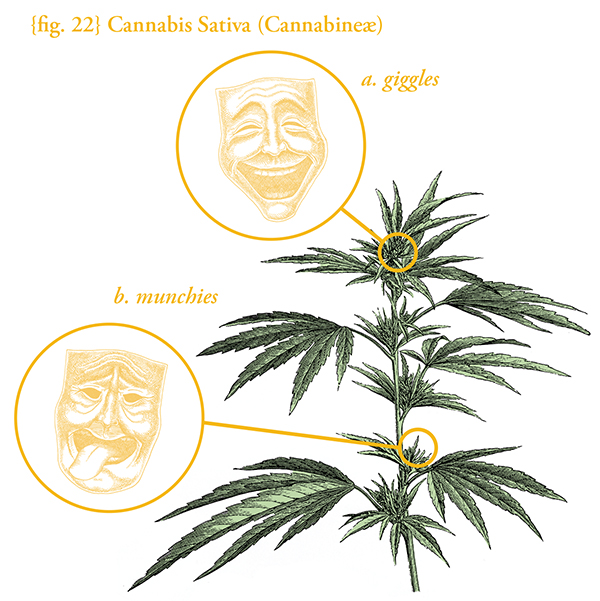 Once the recipe has been developed, Ceria will be brewed at a contract brewery in the Denver area and offered on the shelves of Colorado dispensaries. If Ceria proves to be a success, Villa plans to expand next year into California and Nevada, and then into every state where marijuana is recreationally legal.

"We will use extracts that don't have the cannabis taste," he explains. "What we've seen is that the cannabis smell and taste can be really polarizing. Typically, about half the people that smell it and taste it think it's really disgusting. The other half love it. What we want is for people to focus on the great taste of our craft beers. To do that, we'll use extracts that deliver the sensations but not the aroma and taste of marijuana."

But Is the Market Ready?

Top industry analysts tell Site Selection that it's difficult to gauge how Villa's creation will work in the cannabis marketplace, which, as Villa says, is undergoing vast growth and evolution.

"We'll see," says Bart Watson, chief economist for the Boulder-based Brewers Assocation. "We're seeing a lot of innovation in the cannabis space, so I think a lot of people are trying a lot of different things. With this legal market being relatively new, it's hard to predict which products are going to take off and which are going to struggle.

"For craft-brewed beer," says Watson, "taste is arguably the most important attribute. It's possible with this venture that what they're looking to do is to find an overlap between cannabis consumers and craft beer consumers, who clearly care about taste and flavor." 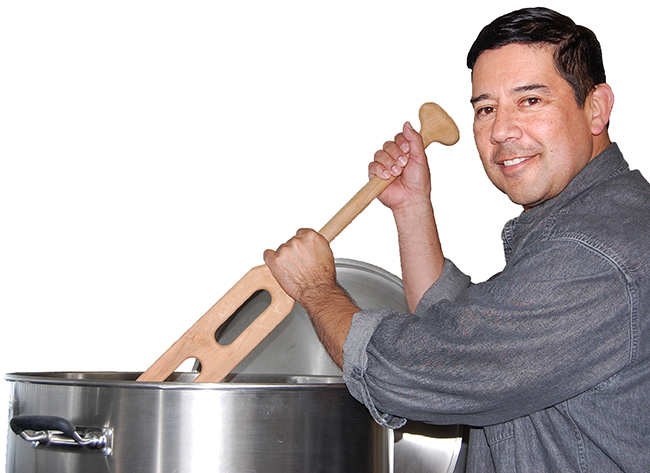 “The market for cannabis is on the brink of exploding.”
— Keith Villa, Founder, Ceria

Jessica Lukas, vice president for consumer insights at Colorado-based BDS analytics, which tracks the cannabis market, agrees that there's a potential market for Ceria. She says that the first challenge will be to get the product onto dispensary shelves.

"I will not be surprised if within six to 12 months the cannabis beverage landscape looks much different than it does today," says Lukas of the explosion within the market. "The players, the products, the people buying it. I think there's an opportunity with a cannabis beer to drive more people who don't currently consume but are open to it. They might feel a bit more comfortable with a product in a form that they understand."

Lukas points out that pricing, specifics of which Villa has not yet determined, will be a crucial factor in whether consumers will spring for Ceria.

Villa says that, despite his earlier opposition to marijuana, he plans to imbibe Ceria.

"Of course," he says. "And responsibly. Right now, we're in the same stage as the U.S. was when prohibition was repealed in 1933. When it was repealed, there was still a stigma and it took a few years to get over it. In today's times, cannabis has that same stigma. Once people realize the benefits of cannabis and all the different attributes of the plant, peoples' minds will change." 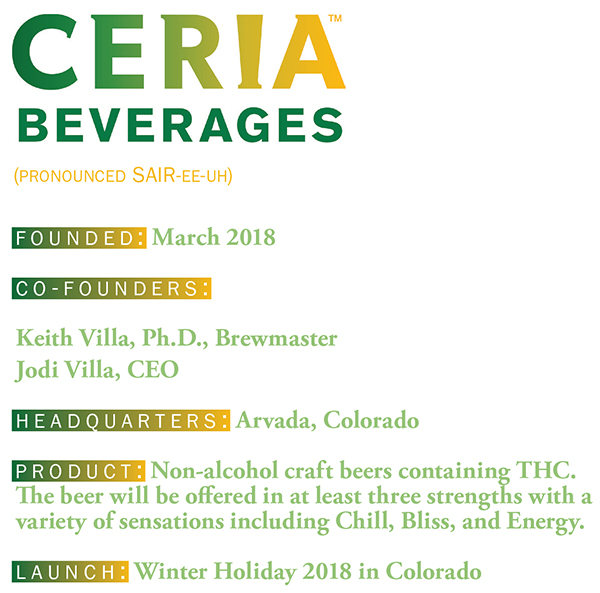