New studies will help you flesh out your own decision matrix. 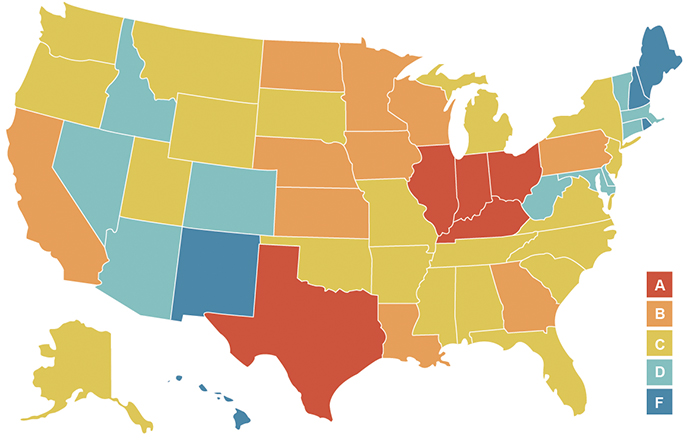 The 2018 Manufacturing & Logistics Report Card from Conexus and the Center for Business and Economic Research at Ball State University gave “A” grades to Illinois, Indiana, Kentucky, Ohio and Texas.
by ADAM BRUNS

Site Selection's Conway Projects Database since January 2017 has tracked more than 1,100 facility investment projects in the United States with a logistics component. It's a competitive field driven by efficiency. So using data to make more efficient logistics location choices is a no-brainer. Two new reports can help.

In June, Conexus Indiana (a non-profit focused on positioning Indiana for growth in manufacturing and logistics) and the Center for Business and Economic Research at Ball State University in Muncie released their 2018 Manufacturing & Logistics Report Card, with letter grades based on an index of federal data awarded to all 50 states across a number of categories. "We include the share of total logistics industry income as a share of total state income, and the employment per capita," the authors explain. "We also include commodity flows data by both rail and road." To that mix they add a measure of infrastructure spending by examining per capita expenditure on highway construction.

Only five states get "A" grades: Illinois, Indiana, Kentucky, Ohio and Texas. "B+" grades go to Iowa and Pennsylvania; "B" grades are awarded to Georgia, Louisiana, Minnesota, Nebraska, North Dakota, Wisconsin; and California and Kansas get "B-" marks.

Without taking per-capita numbers into account, those results compare well with state subtotals from those 1,100-plus projects tracked by Site Selection, with some notable exceptions. Illinois and Texas tie for No. 1 with 178 projects each, followed by Ohio in third with 95. Next come:
4) Georgia (71)
5) California (61)
6) North Carolina (52)
7) Florida (39)
8) Kentucky (35)
T9)  Pennsylvania and New Jersey (29)

By those same tallies, South Carolina comes in tied with Virginia at No. 15, just behind Alabama and Missouri. But a report released in April shows the promise of the Palmetto State.

In partnership with the South Carolina Ports Authority, The Boyd Company, Inc., undertook to determine the most competitive locations for warehousing and distribution based on projected annual operating costs in 20 strategic logistics locations (see table for top 10). Cost projections for the study were based on a hypothetical 750,000-sq.-ft. facility employing 200 hourly workers. Annual labor costs were calculated to include hourly earnings, payroll costs, and fringe benefits. In addition, costs for power, construction mortgage amortization, sales tax, and outbound shipping were all taken into consideration.

Results show that a warehousing/distribution facility in Dillon, South Carolina, could expect an operating cost of $15.3 million annually, the lowest cost among the 20 locations surveyed. The South Carolina Ports Authority is about to open Inland Port Dillon, located within a 3,400-acre industrial site near I-95, close to the North Carolina state line.

The inland port concept is spreading: Georgia has several either already operating or ramping up, and other states such as Texas are deploying similar concepts, whether state- or private sector-backed. Other states' inland ports were not among the 20 locations examined in the Boyd study. But that doesn't detract from its insights. South Carolina Ports Authority Director of Strategic Projects Micah Mallace said the study "reiterates the regional and national significance of South Carolina's growing logistics sector and that Inland Port Dillon will be a vital part of future economic growth throughout the entire state of South Carolina." 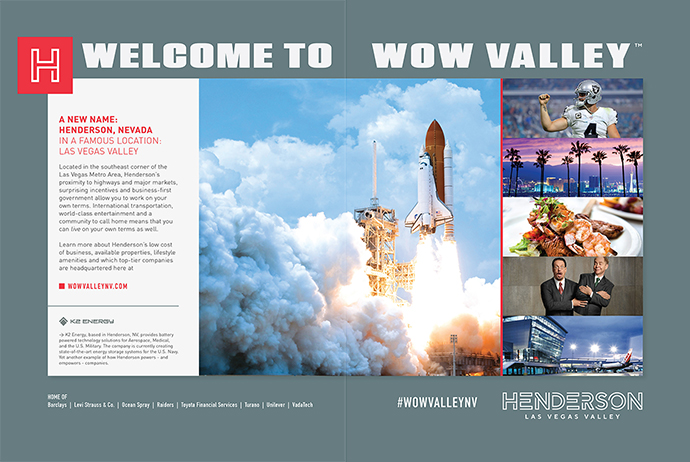 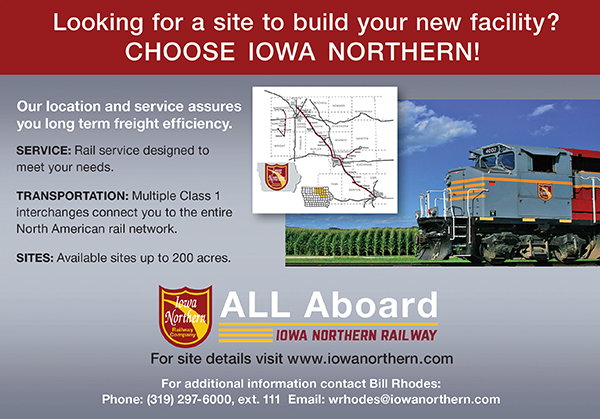 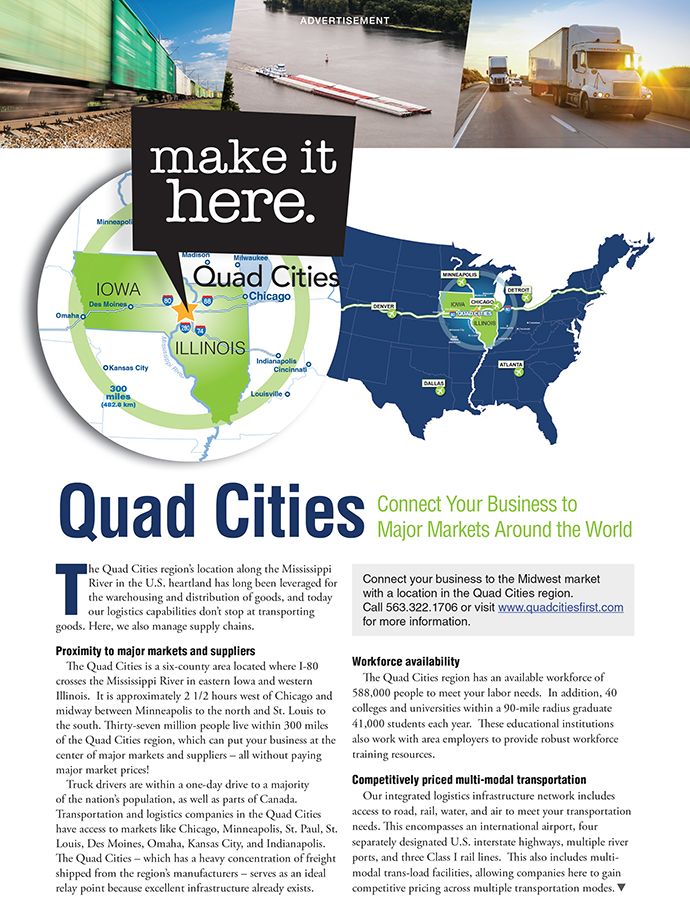 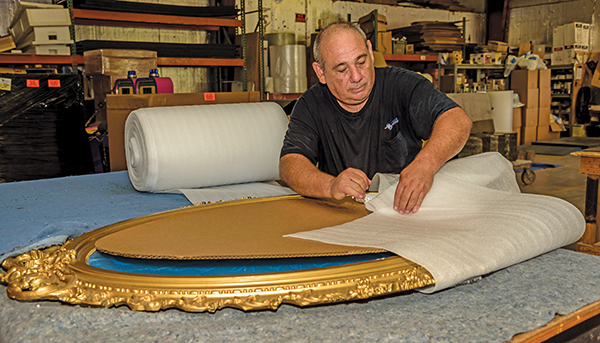 At Craters and Freighters of SW Florida, workers custom pack and ship items from fine artwork to super-sized equipment.

Cape Coral, Florida is the headquarters for businesses fueled by logistics. Whether they manufacture and ship their product direct or place overseas orders to be delivered throughout the United States, Cape Coral business owners enjoy a cost-effective location that boosts the bottom line and a subtropical environment that suits their employees’ lifestyles.

The natural, eco-friendly products of WooBamboo! have spread to 30 countries and are sold in 14,000 stores since the Cape Coral company launched in 2013. Bamboo toothbrushes are hand-made in China, biodegradable tooth floss is made in Milan, Italy, and all-natural toothpaste is manufactured in New York. They are shipped to WooBamboo’s Cape Coral warehouse, and picked up by UPS for delivery to distribution centers. “This is our world headquarters,” says Co-founder and Chief Operating Officer Steve Hyde. “We distribute around the country and world from here.”

Hyde estimates his company oversees the shipment of 70,000 to 80,000 oral care products each month—but it’s a snap because orders and tracking are streamlined through an Electronic Data Interchange system, whether the goods are on a container ship, landing in port or en route on the ground.

Choices for shipping from Cape Coral are many. One company specializes in creating custom crates and packaging for jobs ranging from traditional estate shipments to relocating entire factories overseas. Gary McKinley, owner of Craters & Freighters of SW Florida, says crates are engineered and inspected to meet exporting specifications.

McKinley’s operation has expanded to 10,000 square feet and features deep-well docks for loading efficiency. Craters & Freighters of SW Florida also provides pick-up, insurance coverage, ground, air and ocean shipping, delivery and tracking. “Cape Coral is perfect,” he says, adding that he has enjoyed the city’s “cost efficiencies and
a good lifestyle for employees” since 2007.

For more information about the City of Cape Coral visit us online at www.bizcapecoral.com 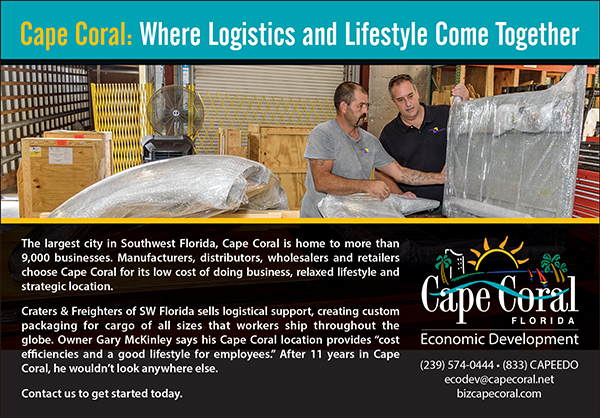