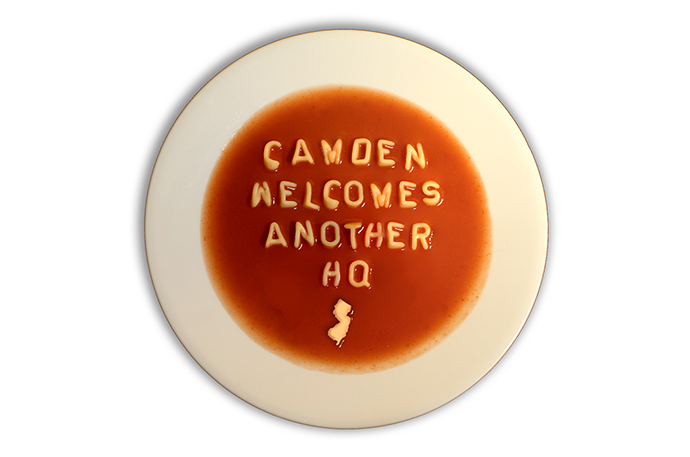 Soup’s on next door too, all part of a new master-planned development across the Delaware from Philadelphia.

When Subaru of America opened a new $118-million headquarters in Camden, New Jersey, in April, it didn't just remove some of the sting from the state's loss of Mercedes-Benz's headquarters to metro Atlanta. It also represented the evolution of a Camden redevelopment story begun by Campbell Soup Company 12 years ago.

First announced in 2014, the Subaru HQ welcomes more than 550 employees as the company consolidates from four sites (including the former home office in Cherry Hill) to one campus. Subaru of America was founded in 1968 in Philadelphia. The company has had its corporate headquarters in New Jersey since 1969.

"Our move to Camden is the next chapter in the long-term future of Subaru in the Delaware Valley," said Thomas J. Doll, president and CEO, Subaru of America, Inc. "We have called this place 'home' for 50 years, and we are thrilled that we will continue to be a part of the local community we have supported for so long."

But Camden continues to set the tone.

Companies that relocate to Camden are able to take advantage of the Grow New Jersey program and the Garden States Growth Zones (GSGZ) program, both part of the New Jersey Economic Opportunity Act of 2013. Grow NJ is the state's main job incentive program, and GSGZ offers developers and tenants in the state's lowest-income cities, including Camden, a tax incentive.

Comfort is Campbell's middle name. But the company takes corporate sustainability and social responsibility as seriously as it takes sustenance.

"Campbell is a major employer in the region with over 1,200 employees that live in the Greater Philadelphia area," explains Kim Fortunato, director of community affairs for the company, and president of the Campbell Soup Foundation. "Our employees are passionate members of the local community, in 2017 providing 12,200 hours of volunteer service, and a $1.5-million financial investment in our hometown Camden via the Campbell Soup Foundation. Campbell has also invested $132 million to remain in Camden and help revitalize its Gateway District."

Sustainability and corporate responsibility are embedded into the culture, adds David Stangis, vice president of corporate responsibility and chief sustainability officer for Campbell Soup Company. "We set targets to improve the health of young people in our hometown communities, by addressing issues such as hunger and childhood obesity in places like Camden. Campbell's annual incentive compensation program includes goals for the absolute reduction of greenhouse gas emissions (GHG), water use and waste to landfill. Sustainability has been a part of the incentive compensation formula at Campbell for many years now."

Campbell first committed to expanding its world headquarters in 2007.

"We began acquiring vacant and neglected buildings, empty parking lots and other unused parcels of land to prepare them for redevelopment," the company recounted in an April release welcoming Subaru to the area.

Campbell itself now is in the midst of a reorganization following the $6.1-billion acquisition of Snyder's-Lance, including establishment of an on-campus Accelerator. Asked about the company's own "redevelopment," Fortunato says, "Camden, New Jersey, has been Campbell's home for the last 149 years. Campbell is excited about the future of Camden and the recent economic growth and revitalization of our hometown community. Not only are we the anchor tenant for an exciting new Knights Crossing development in Camden — alongside our new neighbor, Subaru of America — but Campbell has also just completed our largest acquisition ever, Snyder's-Lance. The future looks bright for both Campbell and Camden."