A Place to Excel

OUC’s visionary mindset is as central as its water and power to making Metro Orlando attractive to top performers like the USTA and KPMG. 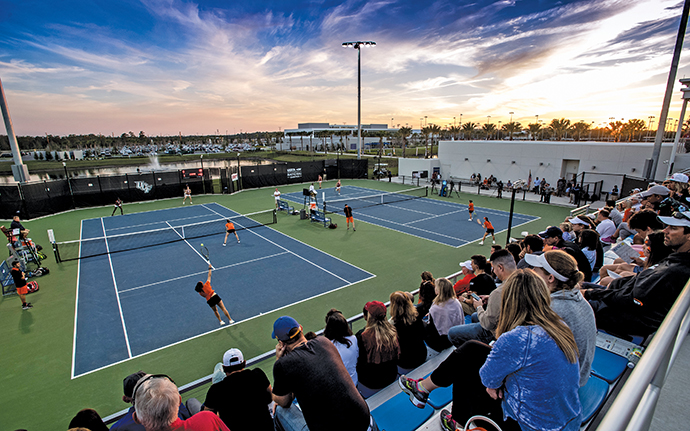 After hosting more than 200,000 visitors in its first year, the $60-million USTA National Campus will host the NCAA Division I Men’s and Women’s Tennis Championships in 2019 and 2021.
Photo by Manuela Davies courtesy of USTA
by ADAM BRUNS

Despite stiff competition from North Carolina, Texas, Arizona and other cities in Florida, the Orlando area captured the $60-million United States Tennis Association (USTA) 64-acre National Campus project prize because of two things, says Kurt Kamperman, the chief executive of the national campus, beginning with "the vision that our partner Tavistock Group had for Lake Nona. We wanted to be part of a community that was focused on innovation, forward thinking and health and wellness." 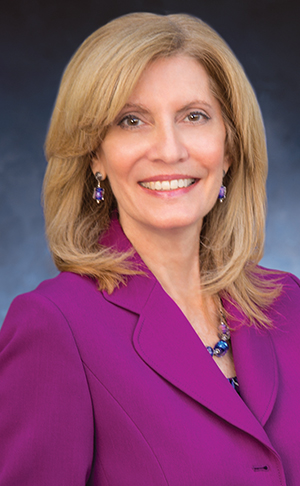 The second intangible, he says, was how collaborative the Lake Nona and Orlando business community is. One of the partners was the team at OUC — the Orlando Utilities Commission — established 95 years ago, and better known today as OUC—The Reliable One.

OUC provides electric and water services to 400,000 accounts in Orlando, St. Cloud and parts of unincorporated Orange and Osceola counties. The City of Orlando's initial $1.55 million investment in OUC nearly a century ago has grown into a utility with more than $3.5 billion in assets, more than 7.8 trillion kilowatt-hours per year in electric power sales, and 29 billion gallons a year in sales of the best-tasting water in Florida.

"OUC creates strategic partnerships with our customers, and it goes beyond just providing electricity and water," says Roseann Harrington, vice president, marketing, communications and community relations for OUC and one of the creators of its economic development team. A veteran OUC leader, she was personally involved in attracting not only the USTA campus, but projects from the likes of Amazon, Crystal Geyser and Lockheed Martin. "We're with you every step of the way, even after you open your doors."

Sustainability and Growth Go Together

"Many cities talk the talk," says Kamperman. "But in Lake Nona/Orlando, collaboration is an intrinsic part of the fabric of the business community. We also knew we were coming to a Lake Nona community that was at the very beginning of an incredible growth spurt that we wanted to be a part of," he says. "Our local partnerships with OUC, Nemours, UCF and others played a significant role."

OUC's innovation mindset is reflected in things like treating water with ozone to reduce the need for chlorine; and investing in new solar power generation and electric-vehicle infrastructure — all serving to further enhance the sustainability profile of the region. Even the OUC headquarters is LEED-Gold certified. New power transmission and water main expansions are on the way. And at Lake Nona, a state-of-the-art chilled water complex is in place to handle the growth in an area now home to more than 12,000 residents and more than 10 million sq. ft. of residential and commercial facilities. That includes the $2-billion Medical City life sciences cluster, anchored by the University of Central Florida College of Medicine.

That sort of savvy has helped grow the area's high-tech modeling and simulation sector, as well as attract investments in advanced manufacturing, cleantech, aerospace and defense.

The talent is attracted too. In 2017, according to the U.S. Census Bureau, Orange County, Florida, was the 12th-fastest-growing county in the nation, welcoming more than 25,000 people from July 2016 to July 2017 to a metro area now boasting 2.6 million people.

The Right Conditions for Takeoff

"Obviously climate was an important consideration, as well as the proximity to an airport that was accessible to most U.S. cities," says the USTA's Kurt Kamperman. Orlando International Airport serves 45 million passengers annually and a fast-growing roster of more than 230 destinations.

The airport and OUC helped attract another campus 500 yards away from the USTA's: KPMG's $400-million, 55-acre world training headquarters, which will bring thousands of KPMG professionals from all over the world every week of the year once it opens in late 2019. 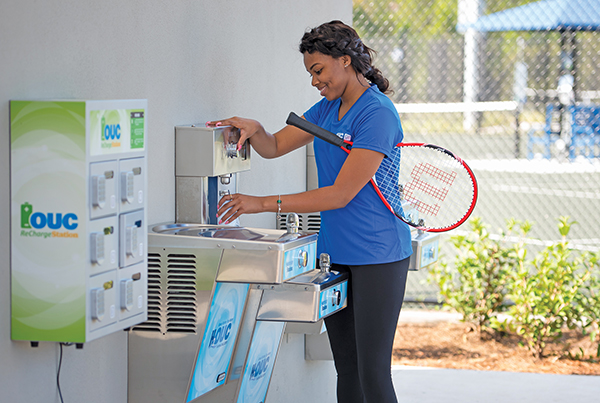 Electric-vehicle and solar-powered mobile-device charging stations, and hydration stations featuring safe, great-tasting H2OUC, are among the ways OUC is helping the USTA enhance its eco-friendly footprint.
Photo courtesy of OUC

OUC's Harrington points out that among the 30,000 people a year expected to visit the KPMG center are the firm's renowned team of global site selection experts. As with USTA and others, OUC's innovative partnership with KPMG is designed to help them flourish. "We want to be a valuable resource, and help them grow," she says. "We make it easy to work with OUC, and put everyone together to help customers meet their goals as quickly as possible."

"I've lived in a number of areas over my career that were experiencing significant growth, but I've never seen anything quite like this," says Kamperman. "The growth in Orlando and in particular the Lake Nona area would be hard to fathom if you weren't seeing it every day. Growth attracts more growth, and any business that looks closely at what is happening here would have to give this area strong consideration as a top prospect."

When they get there, they'll find OUC already in the arena, and ready to serve.

This Investment Profile was prepared under the auspices of OUC—The Reliable One. For more information, contact Economic Development Manager Bob Collins at 407-466-7374 or RCollins@ouc.com, or visit oucpowersgrowth.com.