The Next Tech Startup Hub Is Everywhere 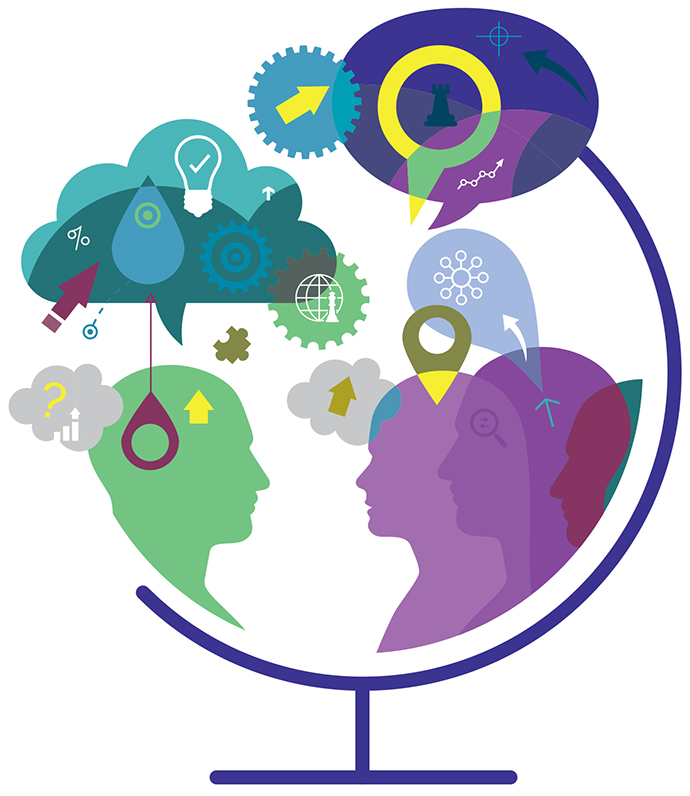 Everyone wants to run a startup — even the big boys and girls.

The KPMG U.S. CEO Outlook 2018 report, based on a survey of 400 CEOs, reports that 77 percent are "very confident" in growth prospects over the next three years (up from just 46 percent a year ago), and the entrepreneurial mindset is a key confidence booster: 46 percent plan to set up accelerator or incubator programs for startups.

In June, London Tech Week was highlighted by Prime Minister Theresa May's announcement of a new £2.5-billion ($3.3-billion) British Patient Capital program to help UK companies with high growth potential to access the long-term investment they need to grow and go global; and a new Start-Up Visa for entrepreneurs.

"The measures we are announcing today will allow innovative British start-ups to invest in their future – and in the UK – by hiring more skilled people, expanding their business and exporting their expertise across the world," said May.

Across the pond, Campbell Soup Company's reorganization includes a new "Accelerator unit" to speed innovation, incubate small brands and startups and cultivate external partnerships. Walmart opened its first technology incubator in December 2017 in an old, open warehouse in downtown Austin, Texas, because of the area's attractiveness to millennials and its leadership as a tech hub — real estate consultancy Savills in 2017 ranked it No. 1 among 22 global tech cities. The center "features a startup-like working environment." 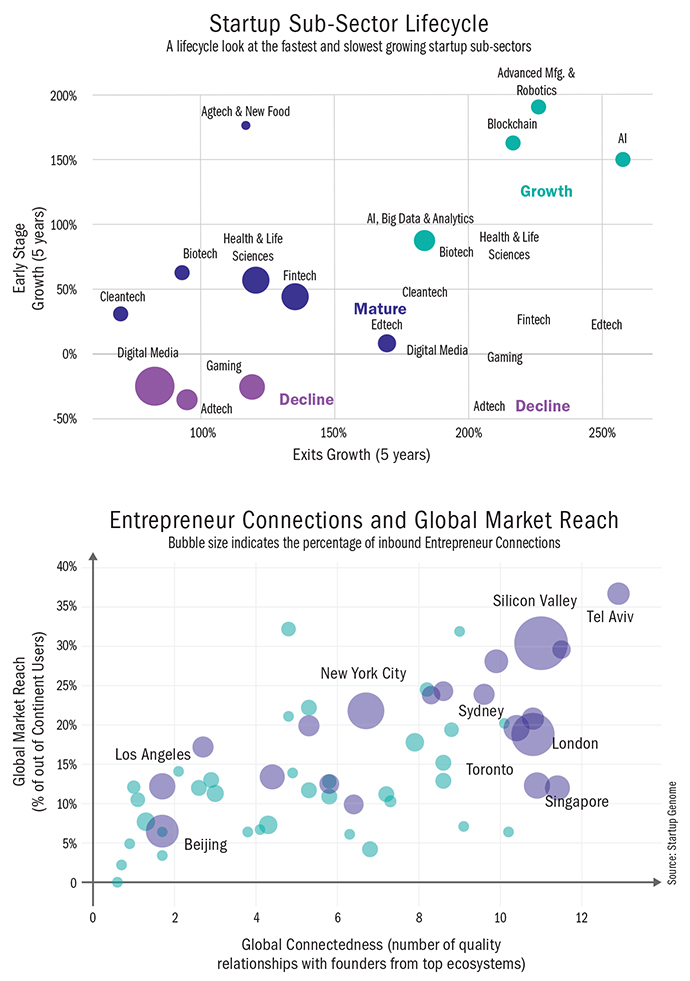 Microsoft just invested $50 million in a 150-employee technology center in the increasingly robust Cortex Innovation Community in the Central West End neighborhood in St. Louis, citing the city's "booming technology scene" and the opportunity to work with startups. Brandywine Realty Trust and LiquidSpace in May announced a partnership to "meet the growing demand for flexible office from startups and enterprises in Philadelphia and beyond." And AOL founder Steve Case's Revolution organization — known for its Rise of the Rest tours highlighting innovation hubs beyond the U.S. coastlines — continues its barnstorming ways, most recently making a road trip that hit Dallas; Memphis, Birmingham, Chattanooga and Louisville with a combination of entrepreneurial cheerleading backed by their very real cash investments in those areas' startups.

It's In the Genome

Given all of these converging strands, the experts at the Global Entrepreneurship Network (GEN) and Bay Area consultancy Startup Genome are onto something. This spring they released their second annual Global Startup Ecosystem Report, ranking metro-area clusters or hubs within 12 sub-sectors with the help of data from Crunchbase, Tech Nation, Orb Intelligence and Dealroom.

"We looked at about 1 million companies globally," says Arnobio Morelix, Startup Genome's director of research. That data was supplemented by an annual survey of around 10,000 startup founders, and dozens of interviews with experts on the report's 12 sectors and approximately 100 ecosystems. "This is the largest startup ecosystem study ever done," says Morelix.

Here, with Startup Genome's permission, we present an adapted section of the 252-pp. report's findings and rankings. To access the entire report, visit startupgenome.com:

The global startup revolution continues to grow. Global venture capital investments in startups hit a decade high in 2017, with over $140 billion invested. Total value creation of the global startup economy from 2015 to 2017 reached $2.3 trillion — a 25.6-percent increase from the 2014 to 2016 period. 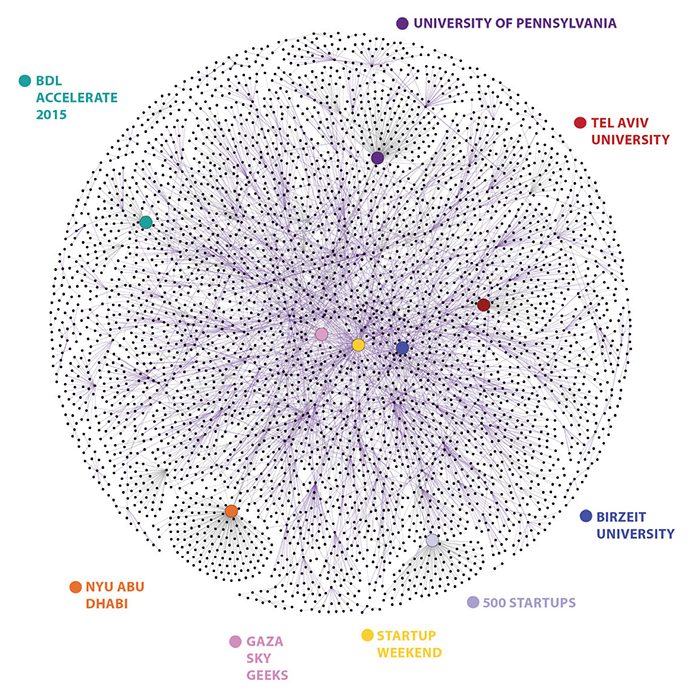 Connections in the West Bank and Gaza Ecosystem

Underneath this continued growth, fundamental shifts are occurring. The types of companies that fueled the first and second generation of global startup ecosystems — social media apps, digital media, and other pure internet companies — are declining.

Top startup hubs like Silicon Valley, London, and New York continue to dominate top-level activity and maintain their status as the top performers for most sub-sectors. But we see strong up-and-coming ecosystems in specific sectors like Fintech (Frankfurt, Germany), Cybersecurity (Tel Aviv, Prague, Toronto) and Blockchain (Vancouver, London, Phoenix). The shifts in the startup map, both geographic and economic, are signals that we are heading into a new era of tech.

In this new era, successful startups will do one of two things: 1) Tackle specific Third Wave verticals — think Uber for mobility or Airbnb for hospitality — or 2) Rely on Deep Tech — i.e. build businesses through technological breakthroughs, e.g. distributed ledgers, AI, or Life Sciences. We see this rise of Third Wave and Deep Tech clearly in the data for sub-sector growth (see graph).

East vs. West: The Rise of China

A major way we see the map of entrepreneurship changing globally with new hubs of excellence is the increase of activity in Asia. For the past six years, the share of funding going to Asia-Pacific countries grew, while the U.S. share declined. In 2017, VC funding for startups in the United States and in the Asia-Pacific region was even, with each accounting for 42 percent of investment value. China is the primary growth driver in this shift. In 2014, only 13.9 percent of current unicorns were from China. In 2017 and 2018 so far, that number has grown to 35 percent, while for the United States it has decreased from 61.1 percent to 41.3 percent. The U.S. still dominates in unicorn exits, however: In 2016-2017, 65 percent were from the United States.

To build the entrepreneurship ecosystems of the future, the key takeaway in this new era of tech is that ecosystem builders need to not only look at tech as a whole, but pay attention to and invest in specific startup sub-sectors.