How the University of Maryland’s Discovery District convinced private investors to take a second look. 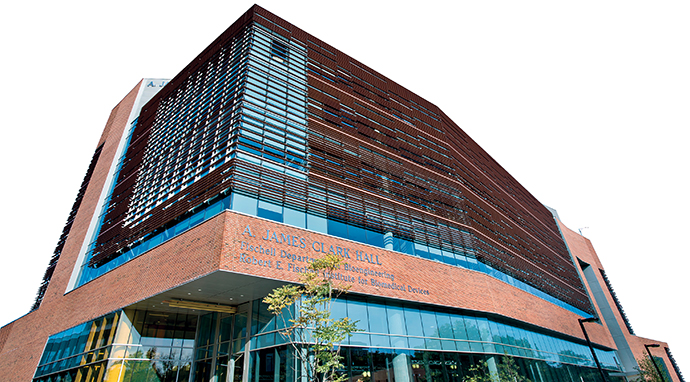 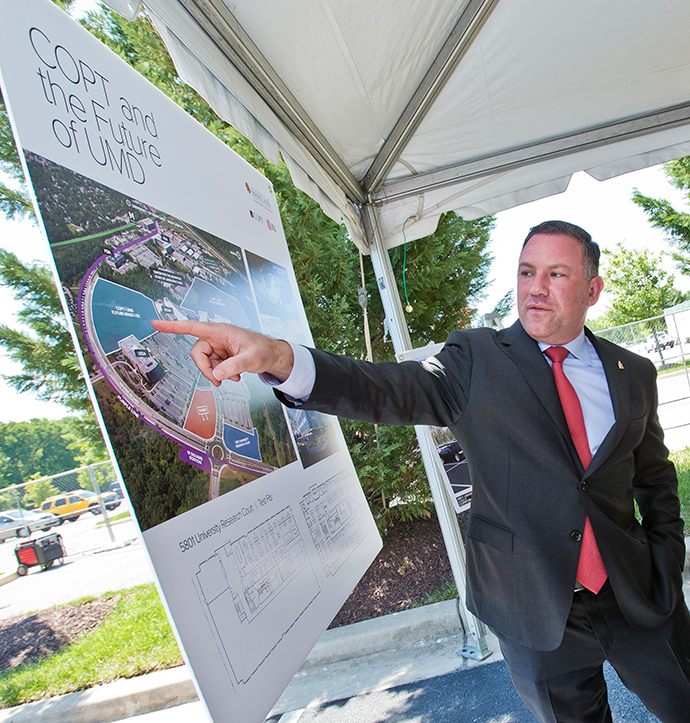 Close proximity to a host research university — check. Sustainably designed and preferably LEED-certified buildings — check. A state-of-the-art telecom infrastructure — check. An office of commercialization — check. These used to define a cutting-edge and competitive research park. Not anymore. Today's "A list" parks, or districts, look more like towns, complete with transit, lodging, residential and retail. Besides those, the University of Maryland's Discovery District in College Park will soon have coworking space, thanks to a recent partnership among the university, global coworking provider WeWork and Chesapeake Realty Partners.

It will be WeWork's first college campus location. WeWork University of Maryland will offer coworking and office space, including more than 300 desks, conference rooms and communal areas. The space will include standard WeWork offerings, such as private offices, dedicated desks and hot desks with unlimited access to any available workspace.

"We've always had a great location, our research park partners have always had a great relationship with the University of Maryland, we have a stop on the Washington Metro and proximity to a 40,000-student campus with 11,000 faculty and staff," says Ken Ulman, UMD's chief strategy officer for economic development. "But we were missing really robust amenities."

Why do those matter?

"If you're a private-sector company and you're competing for talent, that talent is being recruited to Seattle and Boston and Austin," says Ulman. "This region needed to show people a location where you can ride your bike to work, where's there's light rail and cool coffeeshops and restaurants. When your customers and investors come in from out of town, we have an amazing hotel and conference center that can host their meetings and conferences. We were missing that."

'A Cool Place to Work'

More than impressing customers and investors, it's about attracting talent, Ulman stresses.

"When I started talking three and a half years ago to well-known companies in Silicon Valley about what it would take to get them to open a presence at the University of Maryland, I was told, 'Great university, great location, we love the Washington, D.C., region. Most of us have a presence there now. But the kind of employees we're attracting want to go to work in a cool place.' That did have an impact on our thinking about attracting a coworking space provider like WeWork. When folks in that world hear you say 'WeWork,' their eyebrows perk up and they want to hear more."

And they'll find more at UMD's Discovery District, which is hosting the 2018 International Conference of the Association of University Research Parks in October. It's long been a location for federal-agency-sourced research. Tenants include the Intelligence Advanced Research Projects Activity (IARPA), an agency of the Office of the Director of National Intelligence; the National Oceanic and Atmospheric Administration's climate prediction center; and the FDA's food safety division and nutrition headquarters among others.

"We've also had a strong relationship with the private sector, but we believe we're just scratching the surface where those partnerships are concerned," says Ulman. "We knew we had to create a more dynamic ecosystem before we could have those conversations with private-sector leaders."

The conversations include true location amenities, he explains, like a four-star hotel that recently opened. Or Maryland Transit's Purple Line light rail that runs through the campus and connects to Amtrak in New Carrollton and an existing Washington Metro station. New restaurants and coffeeshops.

"We feel we've put into place a number of successful real estate developments that make us an even more compelling place for the private sector," he says.

Where Capital One Capital Is Going

It's working. Recently inked leases for digs in the Discovery District include space for Capital One's new innovation lab, which the university says is designed to give UMD students the opportunity to apply what they are learning in the classroom — in topics like data science, technology and automation — to real-world problems and experiences.

Capital One has also invested $3 million through an endowment gift to help advance machine learning leadership at the university. The gift's impact includes $2.1 million used to endow a faculty chair in the Department of Computer Science — in FinTech machine learning specifically — and $900,000 to help support research and educational initiatives in machine learning, data analytics and cybersecurity. In addition, the university will collaborate with Capital One to develop academic courses offered through its First-Year Innovation & Research Experience (FIRE) program. Better yet, Maryland will match 50 cents on the dollar any gift that endows faculty chairs or faculty members in areas of economic need. That resulted in $1.5 million more for the endowment.

"The opportunities that this partnership will bring to UMD will have a tremendous impact on our students' ability to meet urgent workforce needs," said UMD Senior Vice President and Provost Mary Ann Rankin at the December 2017 announcement. "This partnership will not only help attract and retain top faculty and students, but it will also propel UMD to national prominence and excellence in these critically important fields."

Adam Wenchel, Capital One's vice president of AI and data innovation, put it this way: "We are thrilled to extend our long-standing partnership with the University of Maryland to this important initiative, which will further position the University as one of the leading academic institutions and talent hubs for machine learning, data analytics, and cybersecurity not only in the region, but in the nation."

The partnership is part of the university's Greater College Park initiative, a $2-billion public-private investment to rapidly revitalize the Baltimore Avenue corridor and academic campus, which includes creating a dynamic public-private research hub. Capital One is the first, major private-sector anchor to join UMD's Discovery District, leasing 7,500 sq. ft. in the "Diamondback Garage" — a mixed-use development located behind The Hotel at UMD. Capital One will occupy the space in August, adjacent to UMD's new computer science building.

"That proximity, that back and forth with faculty members, with student interns working collaboratively on challenges for them, is a model we are finding significant interest in from other corporate partners as well," notes Ulman.

Such as? At press time, Adobe was finalizing arrangements for a software research lab in the Discovery District. Already in place are quantum computing company IonQ; Immuta, an AI data management software provider with about 40 employees in College Park; and BlueVoyant, a cybersecurity company that is establishing its security operation center in the District.

"It's not just a place for federal agencies anymore," says Ulman. "It's a place for dynamic startups and existing companies that want access to talent." 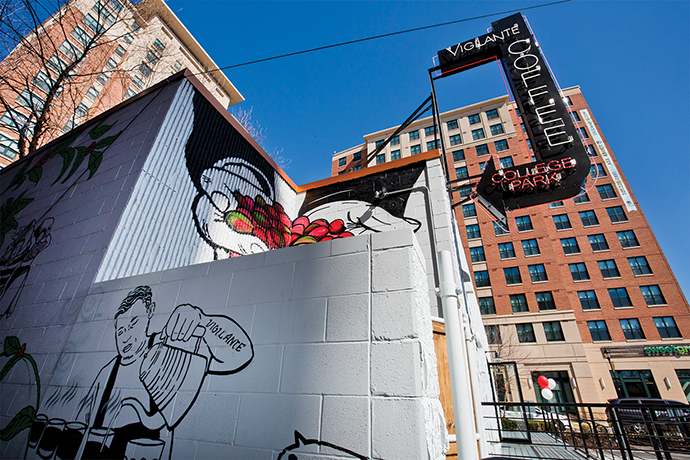 The Vigilante Coffee Company is an award winning roastery with a café in UMD’s Discovery District.
Photo by Stephanie S. Cordle courtesy of University of Maryland