The 2018 Sustainability Rankings highlight an evolving sense of the term, as government and corporate policies converge for the betterment of the world. 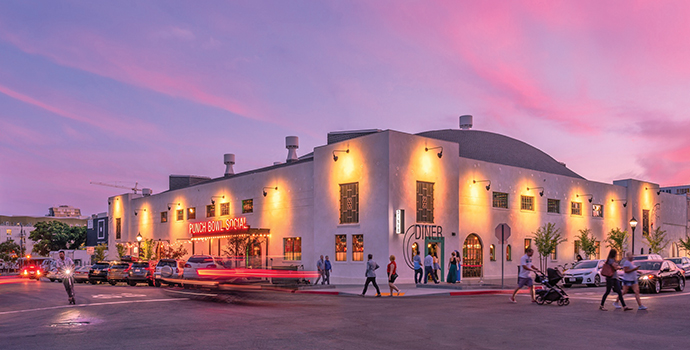 Corporate multinationals have gone from would-be victims of environmental awareness to, in most cases, its champion. It plays well to an audience, for one thing. But more importantly, it plays well with others.

Via a unique, data-rich index, Site Selection's annual sustainability rankings recognize where corporate and community efforts converge to make places with renewal, renewables and planetary responsibility on their minds.

"We were struck again this year by the contrast in some companies (and U.S. states) between companies that are already in a locale and those who are choosing to site a new facility there," says Cynthia Figge, CSRHub co-founder and CEO, and Bahar Gidwani, co-founder and CTO. "For instance, it is clear that the companies joining the Saudi Arabian economy (with an average CSRHub rank at the 46th percentile) could bring sustainability expertise to local Saudi companies (who have an average CSRHub rank of 22 percent). Similar benefits seem to be accruing to Florida, New Jersey, and South Dakota, who may benefit from having companies enter their state who have a 16-percent to 23-percent better CSRHub rank than the average for the companies they already host." 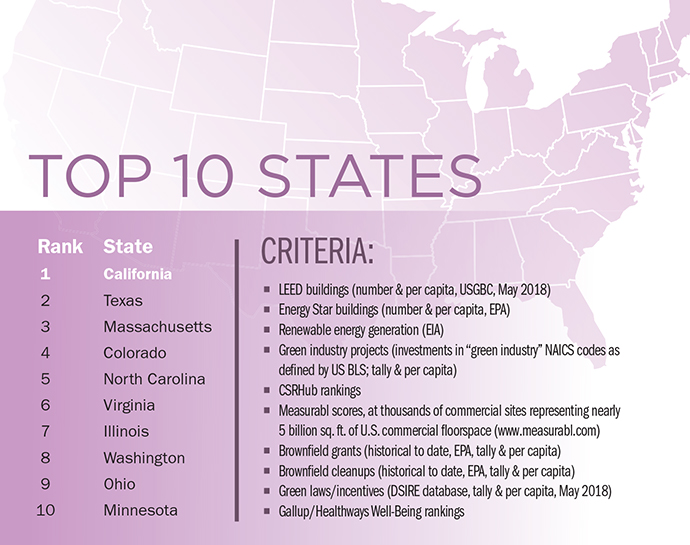 CSRHub, which recently formed a partnership with the National Wildlife Federation, provides access to the world's largest corporate social responsibility and sustainability ratings and information. Aggregating and normalizing information from over 550 data sources, it covers over 18,000 companies from 135 industries in 133 countries.

"It is also interesting to see greater attention on sustainability issues from countries with big shorelines — Canada, which is No. 1 on this year's list, has the world's largest shoreline — or younger populations who may have strong concerns about their country's future (e.g. Brazil and Mexico)," they continue. "Siting companies (those who are expanding into new locations) have an average CSRHub rank of 54 percent. This confirms the generally held view that expanding companies generally pay more attention to sustainability issues than the 'native' companies in the geographies they join."

That's a nice way of saying we sometimes treat new places better than we've treated our hometowns. But the rankings in these pages balance such factors as redevelopment of polluted sites, cleantech and green industry activity, energy awareness, the built environment, policy, and human well-being and quality of life. (See individual rankings charts for methodologies.)

Regulations, Investors and Other Drivers

For the U.S. rankings, granular data about thousands of commercial sites representing almost 5 billion sq. ft. was fed into our index from sustainability reporting software pioneer Measurabl, which produced Measurabl Scores for states and metro areas.

"A few differences between years that can be noted are that Washington and Massachusetts traded positions for the top two states with highest Measurabl Score, while California remains the state with the third highest score," says Scott Knox, chief data scientist for the San Diego–based firm. 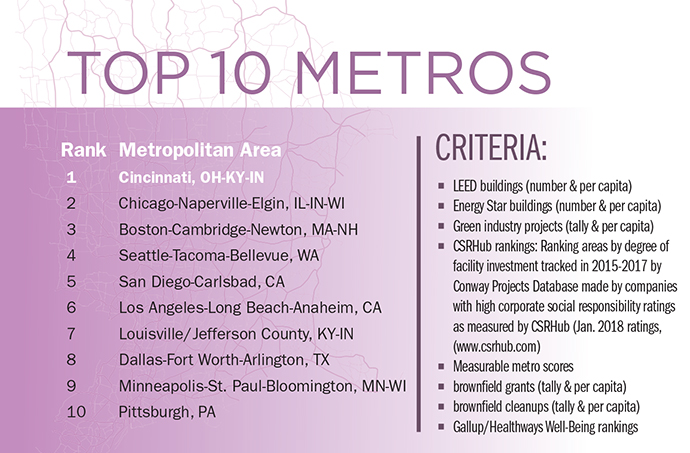 In the overall U.S. state rankings, California vaults from No. 7 to No. 1, Texas (unranked last year) bolts to No. 2 and Massachusetts (also unranked) nabs the No. 3 spot. They're followed by Colorado (unranked) at No. 4 and North Carolina (No. 1 last year) at No. 5.

One major factor in the state rankings is LEED-certified building stock. Overall No. 3 Massachusetts led the nation in 2017 by adding 130 LEED-certified structures (among 1,399 tallied nationally) to its rolls, helping it place 10th overall in total LEED buildings and seventh in LEED buildings per capita. The leaders in total LEED buildings are California, Texas and New York; the District of Columbia leads in LEED per capita, followed by Hawaii, New Mexico, Alaska and Maryland.

California is making headlines this year as a new law benchmarking building performance comes into force. In this case, indeed, companies once again may be finding themselves squirming under the thumb of a regulatory system many view as onerous to say the least.

"We continue to see three factors drive building efficiency and sustainability in the U.S. specifically: (1) regulation, (2) investor pressure (3) tenant demand," Measurabl's Knox says. "For the first time, regulation has eclipsed investor pressure as the number one driver of sustainability in the U.S., thanks in particular to California's benchmarking law, AB 802, finally coming online. California is a vast market, so regulation here not only compels buildings within the state to act, but it has a knock-on effect where owners of multi-state real estate portfolios like CBRE Global Investors, BlackRock, Boston Properties and AvalonBay begin to apply best practices from regulated states like California across their entire portfolio." 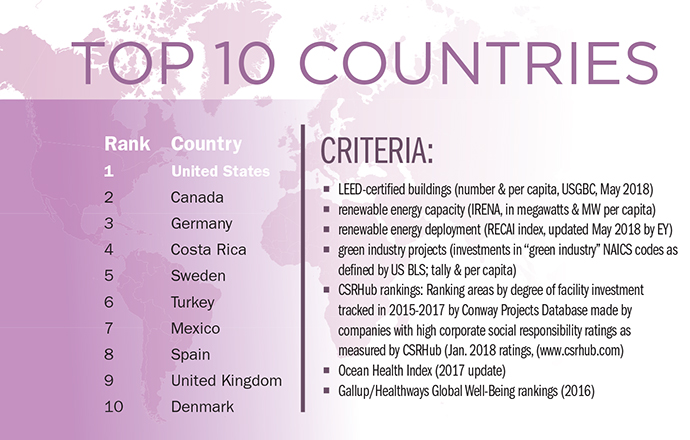 Globally, however, investors continue to be the No. 1 driver, favoring the lower risk and higher returns they correlate with green buildings, Knox says. That sentiment includes lenders But sustainability as a preference in leasing decisions "has not bled into mid-market occupiers and has stayed a preference among large corporates and government who lease from buildings that are already likely to be green, or who have internal guidelines, like America's General Services Administration [GSA], that dictate they do so."

California's green goals got even more real as summer began, when the state mandated that solar be installed on all new homes.

The big metro sustainability prize goes to Greater Cincinnati, which repeats its No. 1 finish in 2017. The Queen City is followed by Chicago (up from 5th), Boston (from 2nd to 3rd) and Seattle (No. 3 last year), then the California duo of San Diego at No. 4 (up from No. 10) and Los Angeles (unranked last year).

The 2018 Green Cincinnati Plan (GCP) includes 80 strategies to reduce Cincinnati's carbon emissions by 80 percent by 2050, with focus areas that include energy, food, transportation, and waste systems. "If we follow this comprehensive blueprint," said Councilmember P.G. Sittenfeld, "it will benefit our economy, our health, our ability to attract talent, and of course the environment that we'll pass along to our children."

Procter & Gamble is synonymous with Cincinnati. Its newly updated "Ambition 2030" plan reflects an evolution of sustainability beyond environmental improvement (P&G already has achieved many of its 2020 goals) to a broader sense of positive impact on society at large.

"Building on our progress to date, our 2030 goals seek to address two of the world's most pressing environmental challenges: finite resources and growing consumption," said Virginie Helias, P&G vice president of global sustainability.

The U.S. Green Building Council notes that top performer Boston's Zoning Article 37 turned 10 years old in 2017: "When enacted, it made Boston the first city in the nation to require private developers of projects over 50,000 square feet to adhere to LEED standards."

The inaugural International Green Building Adoption Index (IGBAI) – a study by CBRE and Maastricht University (Netherlands) — reports that 18.6 percent of space in 10 markets across Australia, Canada and Europe is now certified "green" versus just 6.4 percent in 2007.

"Canadian cities set the pace, with 51.6 percent of the space in Vancouver and 51 percent in Toronto holding 'green' certifications," said CBRE of the nation that places No. 2 in this year's Sustainability rankings, behind the United States and ahead of No. 3 Germany. Costa Rica vaults into the Top 10 at No. 4, with Sweden at No. 5.

"Increased demand for more environmentally responsible buildings from governments, corporate tenants and institutional investors has been particularly evident in cities where 'green' properties made up virtually no part of the office market just a few years ago," CBRE notes. "For instance, the Australian cities of Sydney and Melbourne, third and fourth in the index, saw their 'green' office square footage increase from less than 1 percent in 2006 to more than 46 and 28.8 percent, respectively. Additionally, Warsaw's 'green' office market was essentially non-existent as recently as 2010, but now comprises 21.3 percent of space tracked by CBRE."