Would You Go to Work Here?

Amazon’s ‘The Spheres’ highlights the trend of making the workplace more compelling — even as it seems to find its hometown more repellent. 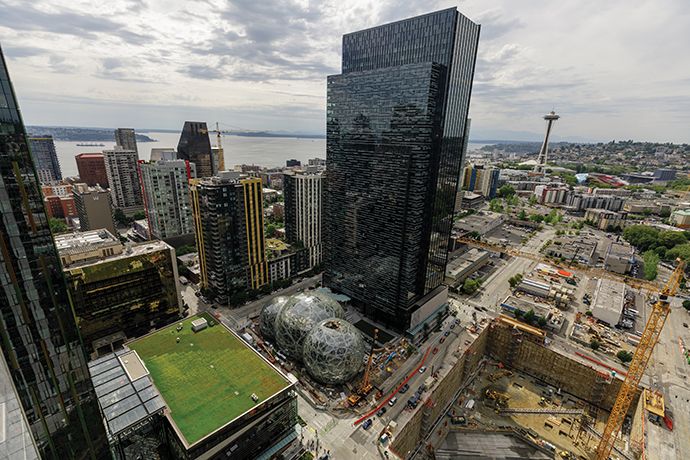 “The Spheres” on Amazon’s Seattle campus are home to more than 40,000 plants and 400 species from around the world.
Source: Amazon
by GARY DAUGHTERS 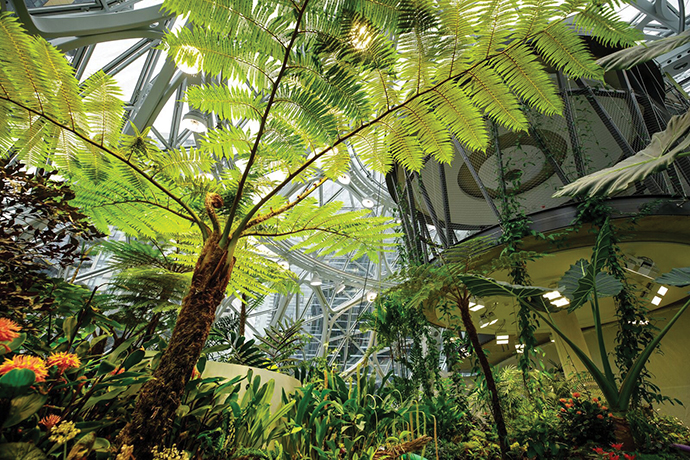 Business owners are becoming increasingly keen to their employees' desires for quality workspaces. The trend is being driven by the need to attract and retain workers during an era of high employment and by the preferences of millennials, whose approach to work and the workplace is thought to diverge from that of previous generations.

"It's harder and harder to bring in the right people and keep them," says Adam Felson, founder of the San Francisco-based commercial project management firm officemorph. "Having a workspace that relates to your core values and allows for people to feel comfortable and happy and safe where they're working is more valuable than ever."

Results of a recent survey conducted by Cushman & Wakefield and CoreNet Global found that attracting and retaining workers is the top challenge for global organizations, and that corporate real estate is "increasingly becoming a significant tool to attract high-quality talent."

"The competition," says David Smith, vice president and Americas head of occupier research for Cushman & Wakefield, "goes down to the level where landlords are realizing that they need to build out spaces or provide amenities that help their tenants keep their employees happy and engaged. Landlords and occupiers both are thinking about how they create experiences and an environment where employees want to be there and want to stay there. One of the drivers of that is that as technology gets better and better, people can work from anywhere, so the office becomes less and less a place that you have to be and becomes more a place you want to be. The employer has to make it a place people want to be to get people in the office, because there are upsides to people being in the office on a regular basis."

Cushman & Wakefield notes that since the Great Recession, the trend in office space layout has been toward greater employee density. Square footage per employee, the firm says, has decreased nationally from 214 sq. ft. (19.9 sq. m.) in 2009 to 193.8 sq. ft. (18 sq. m.) at the end of 2017 — a decline of 17.6 sq. ft. (1.6 sq. m.) or 8.3 percent. While millennial workers are thus accustomed to working in offices of higher densities than previous generations of workers, officemorph's Felson says that achieving the right balance can a challenge.

"The ability to have a nice mix of privacy yet collaboration is very important," says Felson. "A lot of companies don't really do a good job of finding that happy medium. Sometimes they're trying to cram all these work stations into a big office space, and everyone can hear what everyone's saying. They do it because they want people to collaborate, but it's also an economical way to fit as many people in there as they can. You really need to think about acoustics, and you need to have quiet areas where people can do their work."

“Whether it’s rooftop space or space outside the lobby, people want to feel like they’re not in a building.”
— David Smith, Vice President, Americas Head of Occupier Research, Cushman & Wakefield

Felson says one remedy to the density quandary is to make it possible for employees to move about within the workspace.

"Working 40-plus hours a week in a six-by-six cube can feel like a really unpleasant life sentence," he says. "Having different places where people can go and still be productive — whether it's working out of a kitchen area or conference room or having collaborative spaces that resemble living rooms — is all very helpful."

"A big part of this," says Felson, "is being driven by millennials. Often, the people we have the hardest time getting to understand that the offices of yesterday don't allow for flexibility are the people who have been working in the same office arrangement for decades. It's the new generation of workers that want to be able to have the agile workplace.

Aesthetics matter. Especially the one that Felson calls "the right to light."

"Nobody wants to work in an office space where the only light you have is a big sea of fluorescent fixtures. Having natural light is very important, and that's why we're starting to see a lot of companies putting their private offices on the inside and the open office space be on the outside so more people can have access to it."

The Need for Amenities

Cushman & Wakefield's "Space Matters" report notes that "in light of increasing densities, office occupiers are focusing more on the amenities they can offer to attract, retain and delight employees."

Those amenities can take the form of tenant-focused on-site services such as concierge services, dry cleaning, car washes and day care; physical amenities including fitness centers, conference facilities, restaurants, clubs and in-office entertainment; and technology offerings to bolster the convenience of the workplace and to integrate work with outside life.

Smith says the perception of access to nature is proving to be important, as well.

"It has a real wellness value. People who are sitting at a desk and doing computer work want as much of that as they can get. Whether it's rooftop space or space outside the lobby, people want to feel like they're not in a building and that they're getting access to light, greenery, and oxygen. Those sorts of things are really valuable and are seen as benefits to the employee and to functionality as well, because people become more effective when they have access to it."

Officemorph's Felson adds furniture to the list, encouraging employers not to go cheap.

"The choices available for materials, color palettes and textures for commercial office furniture have evolved immensely over the past few years," Felson says. "Selecting corporate office furniture can allow for you to integrate your brand within the workspace to give your employees and guests a unique experience. When a company is bringing in new hires, the space is part of the job interview.

“When a company is bringing in new hires, the space is part of the job interview.”
— Adam Felson, Founder, officemorph

"We just finished a project for a client with a space that hadn't been touched since the 1980's, and you could certainly tell that it's very old school," he continues. "We did a series of changes, most notably having to do with furniture and then some kind of decorative design finishes that we felt needed to be done in order to really help them with their recruitment and retention, because they were losing out on some great hires to companies with more modern space. While we didn't have a formula, it was very clear that this refresh from a design and functionality standpoint was going to move the needle and make some impact."

While hardly within the budget of just any company, Amazon's The Spheres, which officially opened this year, are a dream-like example of creating an environment for employees that is inviting and inspiring. The three interconnected glass orbs, bathed in natural sunlight, have no enclosed offices, conference spaces or desks. Employees can meet in treehouses suspended under 40-foot-tall trees or in sitting areas on walking paths alongside cascading waterfalls.

"Our goal with The Spheres was to create a unique gathering place where employees could collaborate and innovate together," says John Schoettler, Amazon vice president of global real estate and facilities. "We also asked ourselves what was missing from the modern office, and we discovered that that missing element was a link to nature." The Spheres are home to more than 40,000 plants and 400 species from around the world. The Washington Post noted, "This architectural showstopper is a new Seattle landmark and Amazon workplace tool that could help the retail giant attract, retain and enhance the productivity and well-being of its fast-growing workforce."

The Spheres beckon to the 7,000 employees slated to occupy the novel workspace. But Amazon's growing sphere of influence exerts its own undeniable force.

In addition to shopping North America for its 50,000-job HQ2 project, Amazon in May also faced a new "head tax" law passed by the Seattle City Council that was to charge employers with annual revenues over $20 million roughly $275 annually per employee in order to fund programs dealing with homelessness — a growing problem as the city's costs have skyrocketed in parallel with Amazon's growth. The Q2 2017 Cost of Living Index from The Council for Community and Economic Research pegged Seattle in a tie with San Diego for 8th most expensive urban area among 253 nationally.

Amazon employs around 45,000 in the metro area, is still adding employees at a healthy clip, and has restarted construction on another new building that it had paused when a twice-as-costly version of the law was under consideration. But the new law still figured to cost the company nearly $12.5 million.

Amazon in June joined with other major employers such as Starbucks to mount a "No Tax On Jobs" campaign to get a referendum onto the November 2018 ballot to repeal the head tax.

"We heard you," they wrote. "This week, the City Council is moving forward with the consideration of legislation to repeal the current tax on large businesses to address the homelessness crisis. The state and region must be full partners and contribute to the solutions, including working for progressive revenue sources," i.e. taxes that shift the burden proportionally to those who can most afford to pay. But "Seattle taxpayers cannot continue to shoulder the majority of costs, and impacts," said the mayor and her colleagues.

Thus, as the push and pull continues over the true price one must pay for talent, the magnetic field of large employers appears to be at least as powerful as the talent itself. 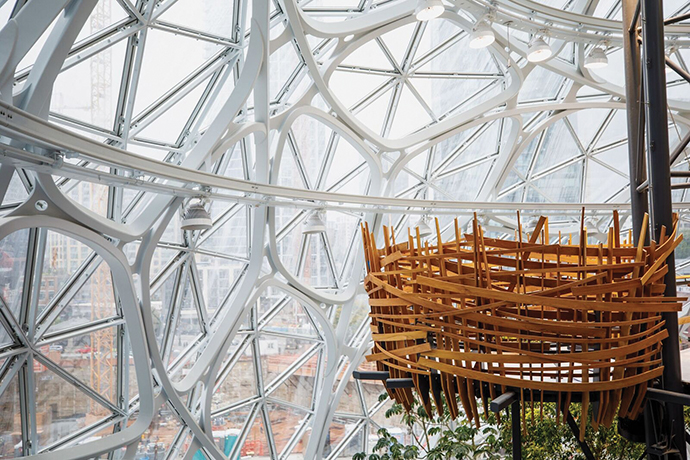 A “bird’s nest” hovers above a seating area in Amazon’s new development called “The Spheres.”
Photo courtesy of Amazon