Positive Signs on the Horizon

Industrial projects aimed at U.S.-Mexico commerce will unite instead of divide.

El Campo is not on the border. But the Texas town halfway between Houston and Victoria is on the edge of a booming future, as it hosts a new project with border-driven commerce fully in its sights.

In June, Atlanta-based Stonemont Financial Group and Ridgeline Property Group, Class I binational railroad Kansas City Southern Railway (KCS) and NAI Partners broke ground in El Campo on the SW International Gateway (SWIG) Business Park, where they hope to see up to 10 million sq. ft. of Class A warehouse, manufacturing and rail-served distribution facilities at full capacity. Situated along nearly two miles of frontage on US 59/I-69 — the NAFTA Superhighway —the park represents what Zack Markwell, CEO and Managing Principal of Stonemont Financial Group, called "a strategic opportunity for businesses that ship goods between the United States and Mexico." Key features include a staging area for more than 200 rail cars; a U.S. Foreign Trade Zone; six Texas ports within 250 miles; and the ability to deliver build-to-suits within 12 months of an executed lease.

"In addition, Kansas City Southern Railway offers seamless cross-border transportation into and out of Mexico with customs pre-clearance for faster, lower-cost service than trucks can offer," the partners said in a release. KCS also has unique rail access, via Kansas City Southern de Mexico (KCSM), to the Port of Lazaro Cardenas on Mexico's Pacific coast, where facility investment and business is finally ramping up as an alternative to the frequent congestion encountered at other West Coast ports, following the opening of APM Terminals' $900-million terminal there last year.

KCSM serves northeastern and central Mexico and the port cities of Lázaro Cárdenas, Tampico and Veracruz, and has a 50 percent interest in Panama Canal Railway Company, providing ocean-to-ocean freight and passenger service along the Panama Canal. Veracruz also is seeing a huge increase in business, and in vehicle processing traffic in particular: New numbers from the American Association of Port Authorities shared with Site Selection in June show the port for the first time in 2017 surpassed the 1-million-vehicle mark, up by a dramatic 34 percent from 770,729 in 2016.

Other parks with a border focus are moving forward too, even as border immigration issues dominate the headlines and airwaves. In the San Diego area, a partnership of Kearny Real Estate Company and PCCP, LLC broke ground in March on Phase 1 of its 311-acre Otay Crossings Commerce Park adjacent to a new U.S.-Mexico Point of Entry (POE) in Otay Mesa in San Diego County. The park will be located along the final extension of California State Route SR-11, which will connect the existing 905 & 125 freeways to the border. The future POE is being designed to alleviate the extensive wait time at the existing POE, which is located one mile to the west.

A 40-acre parcel was already spoken for at the time of the groundbreaking. Kearny plans to complete the $40 million first phase of on- and off-site infrastructure improvements and deliver finished lots by the summer of 2019 to coincide with the opening for the SR-11 extension to the border.

Otay Mesa POE averages 2,850 truck crossings a day, or nearly two trucks every minute, according to federal statistics. In 2016, more than $41.8 billion of goods crossed the border through Otay Mesa.

Market 'Hotter Than a Firecracker'

Steve Pastor is vice president, global supply chain & ports/rail, for NAI James E. Hanson and national chairperson for NAI Global's Industrial Council. In addition to decades of experience in the NAFTA industrial market, he also brings to the table a travel schedule logging between 120,000 and 150,000 miles a year. So he knows whereof he speaks when he tells me, "The industrial market is hotter than a firecracker."

He says the El Campo project's location outside of the Houston but within a few hours of Laredo puts it outside the congestion zone but close enough to offer critical industrial rail park options in a region that doesn't really have any, especially as the building product in Laredo has aged.

"When companies are looking," he says, "one thing on the checklist is they don't want to be near congestion. Traffic costs time and money."

"KCS continues to hear customers discuss warehouse space availability, rising cost concerns, and limitations in the Class A availability of warehousing in the border area of Laredo, Texas," says C. Doniele Carlson, KCS assistant vice president of corporate communications & community affairs. "Many of those customers are focused on finding solutions for southbound and northbound shipments in and out of Mexico, but are not necessarily tied to using a border town location for storage and distribution."

Pastor says his advice to all railroad clients is simple: "If you have had land since Washington crossed the Delaware and you haven't used it, you probably don't need it."

Instead, he says, they can sell off parcels and create profit centers in partnership with developers.

"KCS is a perfect example," he says, as it sought out a developer partner to work hand in hand to build a rail park to service clients moving cargo to and from Mexico. "They were ahead of the curve," he says.

And demand for heavy rail use? There's plenty of that.

"Houston is very congested, so this will help," says Pastor, "and you'll be able to service Austin, San Antonio, Houston. There are clients right now bringing stuff up from Mexico, going to Dallas, and trucking back to Houston. How does that make sense? It doesn't. People will be stacked up like planes coming into Atlanta, wanting to be in this park."

Among the reasons are rising concerns about trucking availability and theft, says Carlson. A shift to rail, combined with KCS and KCSM working as a single rail line network connecting the two nations' markets, presents an opportunity for all.

"Many shippers moving products northbound from Mexico have to seasonally adjust trucking volumes due to the fruits and vegetables industry," Carlson notes. "The erratic truck availability causes uncertainty in the supply chain for some of our customers. With levels of product inventory being historically lower than previous years, the margin for error in timing of deliveries becomes a major customer concern. Customers wanting to convert freight from truck to boxcar from Mexico to the SWIG business park can resolve their equipment inconsistency and gain a reliable option to manage their inventory flow."

The railroad is also working with federal authorities on both sides of the border to expedite that flow. Recently, U.S. Customs and Border Protection (CBP) senior management, together with counterparts from Servicio de Administracion Tributaria/Aduana Mexico, KCS and local Congressional and municipal representatives, gathered in Laredo to dedicate a processing building that will greatly help to facilitate CBP/SAT joint rail operations in Laredo.

Located close to the railhead of the Laredo International Rail Bridge, the building enables Mexico Customs officers to complete their outbound inspections and CBP to perform their inbound inspection processes simultaneously. The port of entry experienced a 16.5-percent increase in northbound rail traffic growth in 2017.

Meanwhile, investment in infrastructure on the southern side of that border continues to pay dividends.

"Mexico continues to be a growth generator for KCS," says Carlson. "The millions of dollars in infrastructure investment that KCS has made over the past several years continues to provide opportunities." 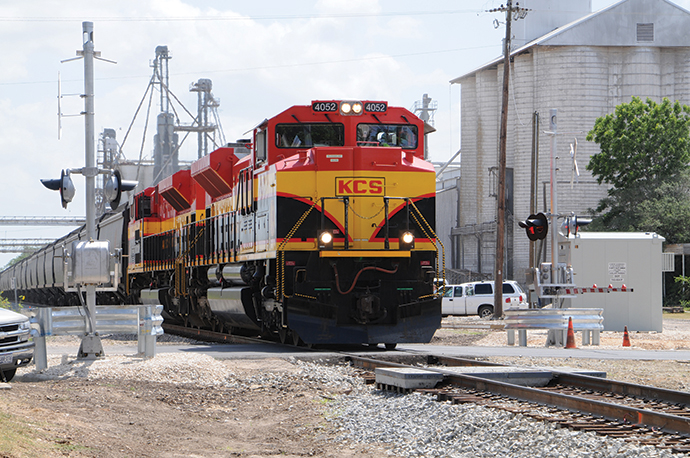