How SkyBridge Will Complement Sky Harbor

An air cargo and customs facility in a Phoenix suburb will redefine cross-border trade in the US Southwest. 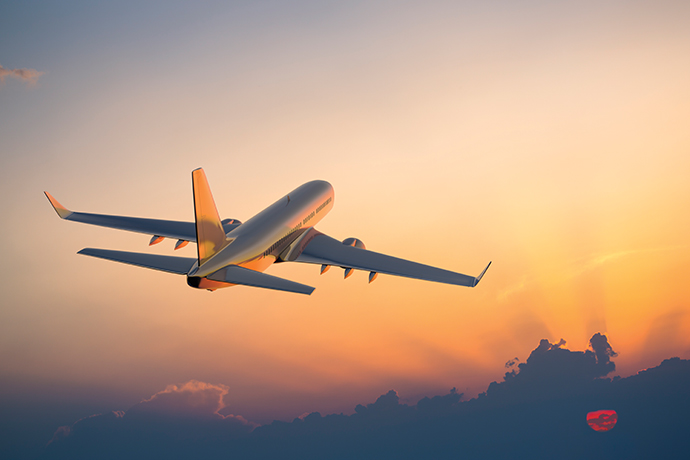 Governor Doug Ducey announced on January 5th that Arizona will be home to SkyBridge Arizona, the nation’s first international air cargo hub to house both Mexican and United States customs. The first-of-its-kind service, which will be operated out of Phoenix-Mesa Gateway Airport, will enable e-commerce companies, manufacturers and other commercial interests conducting business in Mexico and throughout Latin America to more efficiently and cost-effectively transport goods between countries, while ensuring proper inspections and safety controls.

The project is expected to create 17,000 direct and indirect jobs and increase cargo flights out of Phoenix-Mesa Gateway Airport by 2,000 a year, eventually reaching 10,000 by 2036.

“The arrival of SkyBridge Arizona once again proves that our state is a national leader in advancing innovative new ideas,” said Governor Ducey. “Arizona has forged an incredible relationship with our friends and neighbors in Mexico, and we’re very proud of this latest collaboration to enhance international trade and create more jobs for Arizonans.” 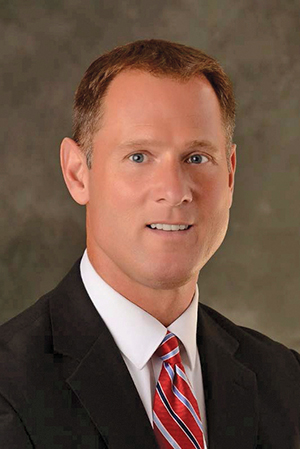 “All the elected officials and economic development agencies are united and working together on the SkyBridge vision.”
— Brian O’Neill, Executive Director & CEO, Phoenix-Mesa Gateway Airport

“SkyBridge will truly change the way we conduct cross-border business, slashing delivery times for companies and ensuring safe transit, said SkyBridge CEO Ariel Picker. “This is true international cooperation and something we can all be proud of.”

The new services provided by SkyBridge Arizona at Phoenix-Mesa Gateway Airport will allow users to send products anywhere in Mexico without having to go through the cumbersome and inefficient international customs center in Mexico City.

The Time Is Right

“Consumers in Latin America want the ability to purchase goods online and receive them the next day — SkyBridge Arizona will make that a reality,” said Mesa Mayor John Giles. “This project will transform Mesa into an international e-commerce hub, benefitting not only our city but also our state and the Arizona-Mexico region as a whole.”

Phoenix-area newcomer Brian O’Neill says the region’s spirit of cooperation and working toward a common goal will add wind to the sail that is the SkyBridge initiative. New Hampshire transplant O’Neill is Phoenix-Mesa Gateway Airport executive director and CEO. “All the elected officials and economic development agencies are united and working together on the SkyBridge vision,” he notes. “In many other places you’ll find local barriers that wouldn’t allow that to happen.”

Several other dynamics are at work, too, says O’Neill.

“The strength of the trading relationship between Arizona and Mexico and the emerging e-commerce industry in Mexico are two,” he says. “Mexico may be behind the US, but with technology they are moving quickly, and the opportunity that became SkyBridge Arizona is partially because the timing is such that this project has to happen.”

Another is the full support of Phoenix Sky Harbor Airport authorities. That’s the major airport in the region, handling 44 million passengers per year. 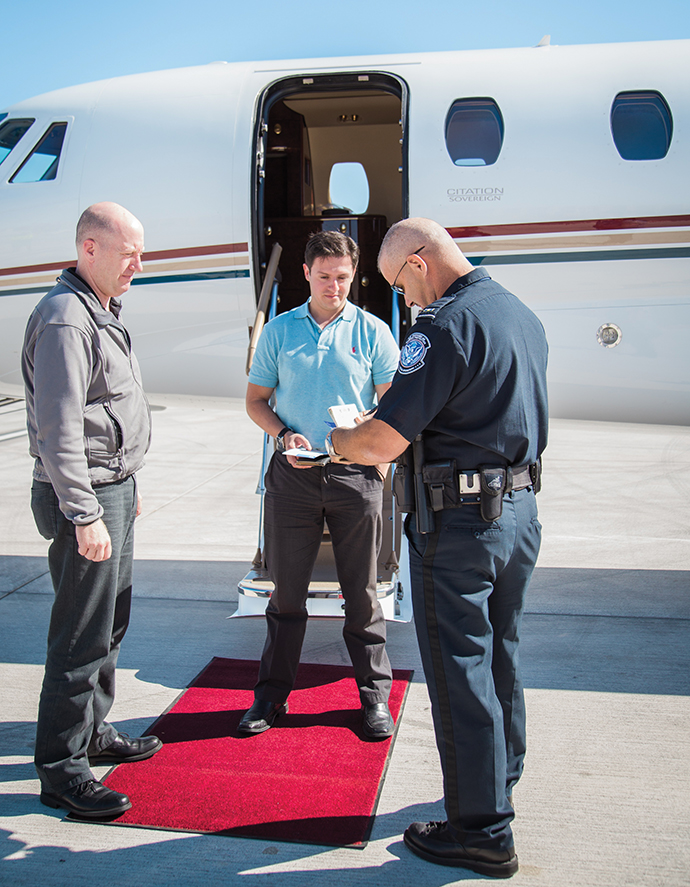 “Their strengths are being a major hub for American Airlines, a focus city for Southwest and they have international air service,” O’Neill notes. “I think the role they will play in this dynamic region is the major domestic and international airport. But there is so much more to a comprehensive, multimodal air transportation system. Our attributes include 1,000 acres of developable land, proximity to two Interstates and incredible support from leadership across the East Valley. If this were going to happen, all the stars are lining up for it to do so at Phoenix-Mesa Gateway Airport.”

“There is incredible opportunity here, and we are starting to take advantage of some of that potential and turn it into economic opportunity, which is very exciting,” says Shea Joachim, business development director at Phoenix-Mesa-Gateway Airport.

Meetings between airport management and parties interested in the airport’s potential in early 2016 resulted in several ideas — the low-hanging fruit being real estate development around the airport, says Joachim. “Rarely do you find an airport with as much airfield infrastructure as we have with so much available land for development,” he notes. “That’s not something we didn’t know, but it’s nice to have the market validate some of our assumptions.”

The airport authority assumed ownership of the airport and its land following its decommissioning as an Air Force base but has not been capitalized to take on significant real estate development, particularly the funds for the infrastructure needed to prepare the land for development.

“We turned that constraint into an opportunity,” says Joachim. “We solicited a master developer who would sit on the same side of the table we do and would bring funds, expertise and relationships with the goal of sparking development. Mesa SkyBridge came out on top.” The force behind that LLC is a Mexican company, Grupo Seguritech, a conglomerate with expertise in security services — asset protection — for local, state and federal Mexican agencies and others.

“They proposed to privately develop all the infrastructure necessary to unlock the 360 acres [146 hectares] of the Gateway Aerospace Park, which was incredible for us, because that’s funding we couldn’t have sourced on our own,” says Joachim. “We look at it in some ways as a public-private partnership to not only bring infrastructure to the airport but also economic activity, which is exactly what we needed.”

The Unified Cargo Processing (UCP) Program — jointly operated by both U.S. and Mexican customs officers — seamlessly approves incoming and outgoing freight at Phoenix-Mesa Gateway Airport (already a Foreign Trade Zone) bound for customers on either side of the U.S.-Mexico border. The UCP pilot program began last year in Nogales, Arizona, and has been approved for air freight to SkyBridge Arizona.

All required documents, inspections, tracking and other services will occur on-site at Phoenix-Mesa Gateway Airport. The Customs Processing status will follow packages and cargo electronically to their final destination to any city in Mexico, and eventually further into Central and South America. The UCP Program will be operational at Phoenix-Mesa Gateway Airport in the coming months.

SkyBridge Arizona by the Numbers:

“Think of SkyBridge as a metaphor for an improved method for moving cargo and goods between the two countries,” says Joachim. “It was created at the border in Arizona, in Nogales, where Mexican and U.S. Customs agents are jointly inspecting cargo heading for the United States and then to Mexico. It improves efficiencies — rather than having to be cleared for export by U.S. Customs and then cleared for import by Mexican Customs, which are two processes that can all happen at once. It’s a popular program that has grown out of its pilot stage and we’re happy to announce that as part of this SkyBridge deal, Gateway will be the first inland port for this unified cargo processing program.”

This means that any goods headed to Mexico could be flown into Gateway Airport, jointly inspected by U.S. and Mexican Customs and flown to any airport in Mexico. SkyBridge could see trucking activity, but the point is to facilitate air cargo between the two markets.

“We’ve done some due diligence with companies around the airport who send things back and forth to Mexico,” Joachim. “One in particular sends widgets to Mexico for some value-added work, and it takes 18 days to get to its destination in Mexico, and it takes 20 days to get it back. This company prides itself on speed, efficiencies and lower cost to the customer. This program could cut that transit time to several days. It’s very intriguing to companies.”

Grupo Seguritech’s expertise is with Mexican entities, but the program could be expanded to other countries, says Joachim. “The goal of the SkyBridge team, once the Mexican process is proven, is to expand it to other Latin American countries. Gateway would become a funnel for any goods heading to Latin America.” 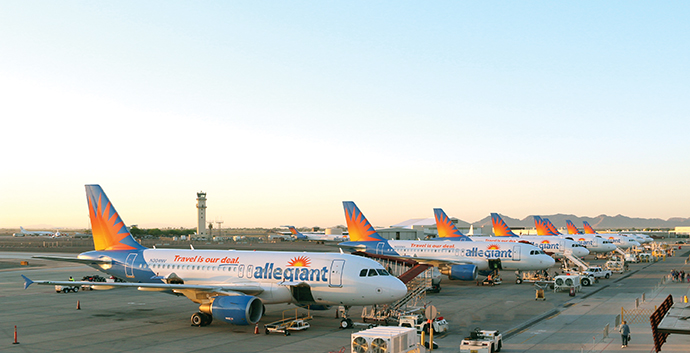 “It will greatly streamline the process — it could be next-day delivery,” adds Jose Pablo Martinez, Grupo Seguritech’s project manager on SkyBridge. “We are in the process of getting Mexican officials onsite to begin piloting this program before we start building out our facilities,” Martinez told Site Selection in January. “I started the master planning process already — AECOM is our principal master planner. That process and getting approvals from Mesa and the FAA for buildout and our logistics planning are under way this year.”

Martinez says the master plan includes warehouse space, flex space, office, light industrial, retail and the customs and air cargo facilities. “It will be mixed-use, but focused on the industrial and Customs side,” he explains, adding that a taxiway will be built leading to the Customs facilities and will spur airside development onsite.