As facilities grow more flexible, so too do the boundaries of their old favorite locations. 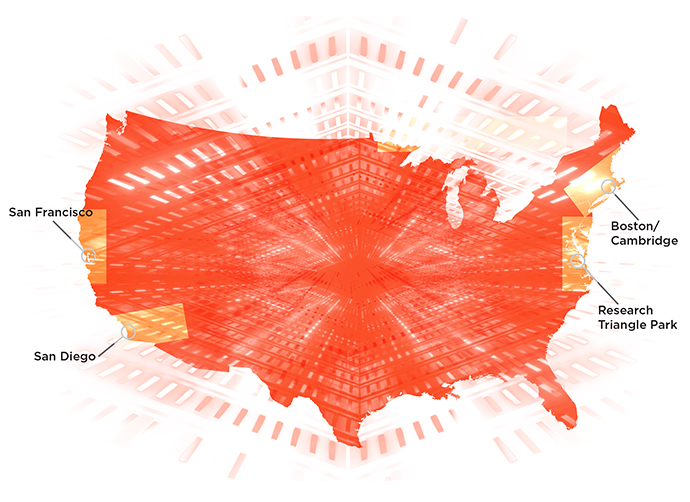 The strong keep getting stronger when it comes to US biopharma clusters.
Image courtesy of JLL
by ADAM BRUNS

Like ripples in a pond, the location patterns of biopharma companies continue to radiate in close proximity to places that have already made a big splash.

That means higher prices for workspace and places to live. But so far, that isn’t stopping anyone. On the contrary, says one new report from JLL: Companies are building more and more lifestyle amenities into their sites in these coveted life sciences locations — almost as if to say, “We’re making this campus like home, because you can’t afford to have much of a home here anyway.”

Biologics company LakePharma is making itself at home in two industry hot spots: Last September the company celebrated expansion of its Antibody Center to a new facility in South San Francisco.

“South San Francisco is the birthplace of biotechnology. Over the last 30 plus years, it has developed into a world-class hub of innovation and achievements,“ said LakePharma Chief Scientific Officer Aaron Sato, Ph.D. “LakePharma started in the Bay area back in 2009. Today we have happy customers and partners all over the world, including here in South San Francisco.”

In February, the company announced the launch of the LakePharma MicroBiomanufacturing (GMP) Center in Hopkinton, Massachusetts. The newly acquired building includes lab, office space and manufacturing infrastructure, ideal for the company’s intention to develop the site to perform GMP biologics manufacturing for Phase 1 clinical trials, in addition to other services. The company plans to add approximately 100 positions at the Center by 2020.

“The new facility is ideal for LakePharma as it provides the ability to offer fully integrated contract development and manufacturing organization [CDMO] capabilities,” said Hua Tu, Ph.D., founder and CEO of LakePharma. “Hopkinton is in close proximity to Cambridge/Boston, where we have a large cluster of clients, and we believe that this facility will increase our ability to serve their product development and manufacturing needs.”

The LakePharma MicroBiomanufacturing Center joins a portfolio that includes the LakePharma Vector Center in Worcester, Massachusetts, located on the Worcester Polytech Institute campus, where the company plans to double the size of its molecular biology and cell culture operations this year.

That’s just one sign that Worcester is getting better. In November, Massachusetts Lieutenant Governor Karyn Polito joined local and state officials and stakeholders from the Worcester Business Development Corporation (WBDC) to highlight progress on the redevelopment of the former Worcester State Hospital campus into a hub for biomanufacturing.

Biopharma and medical device employment has grown in California for three years running. It grew by 7.7 percent between 2012 and 2016 to reach 127,734, according to BLS statistics. That makes California No. 1 in the nation, with the total employee tally in those two sectors eclipsing No. 2 New York by more than threefold.
Graph courtesy of California Life Sciences Association

“The WBDC has a proud history of innovation in the biotechnology industry,” said Craig Blais, president and CEO of the WBDC, “and is looking forward to building upon that history as we seek to complement the ongoing R&D in Worcester — moving from researching the future to manufacturing the future.”

On that same day in November, the administration announced the launch of the Massachusetts Next Generation Initiative (MassNextGen), a new $1-millon, five-year competitive program to support women entrepreneurs in early-stage life sciences companies. The $1-million commitment includes $500,000 in direct awards to participants, with $250,000 in 1-to-1 funding matches from Takeda as the initial partner and the Massachusetts Life Sciences Center (MLSC).

JLL’s “Journey to the next gen lab” cites a Deloitte finding that the average return on R&D investments among large biopharma firms has sharply declined from 10.1 percent to just 3.2 percent in 2017, even as shorter timelines and product lifecycles also exert pressure. So collaboration and flexibility — as similarly detailed last year in the Industrial Asset Management Council’s “Rx for Change: The Flexible Biopharma Facility of the Future” white paper — are the order of the day, according to JLL’s survey of executives at 15 biopharma and medical device firms.

“As a result of organizational cost pressures and a stronger focus on shortening the product lifecycle, R&D real estate is becoming multiuse,” said Roger Humphrey, executive managing director and leader of JLL’s Life Sciences group. “The result is a drive toward highly flexible and attractive workplaces that appeal to not only scientific, but technical talent.”

The three trends identified in the interviews?

Designing for flexibility and collaboration: mobile benches and unassigned workspaces; retractable electrical cords from the ceiling to avoid limitation of equipment against walls; thick floor slabs in lab corridors and technical infrastructure behind a facade to enable easy movement of people and equipment. The next phase? JLL researcher Bobby Wadhwa says, “While all companies agree that artificial intelligence is trending upward, a majority of companies have not incorporated it into their workflow in a meaningful way.”

Fewer wet labs and more computational science space: “A traditional R&D facility would consist of mostly lab space and a small proportion of office,” Humphrey said. “In a few years, those proportions will likely shift to equal parts web labs, flex space and office space for the data scientists.”

A focus on talent recruitment and retention: Companies have intensified their drive to be near leading academic research centers and the supportive R&D ecosystems that surround them. “Despite high rents, cities like San Francisco, San Diego and Boston continue to attract leading companies that want access to resources and talent,” says the report. “We’re seeing a growing trend toward creating engaging, attractive labs and office workplaces,” Humphrey said.

The reinforcement of already strong clusters was reinforced by comments from the unnamed executives: “By being in the Cambridge market and all it has to offer, candidly, we stand a very good chance of attaining the best new, young talent,” said one. “Being close to universities and research hospitals is big,” said another. “You don’t want to have a facility in Iowa; it makes it very difficult to recruit and to retain top staff.” (Leaders at Iowa State University and backers of the state’s Cultivation Corridor — where Des Moines, the fastest-growing city in the Midwest last year, is located — might disagree.)

A January report from CBRE says Boston and the Bay Area will continue to have “outsized gains” in life sciences real estate due to their R&D concentration. According to the report, employment in US life sciences has risen by 23.5 percent since 2001, outpacing the overall job-growth rate of 10.2 percent. “Lab-space vacancy rates are tight in primary life-sciences markets, registering at less than 2 percent in Chicago, 4 percent in the Bay Area and less than 5 percent in Boston,” CBRE notes. “And rent growth is robust, including a 50-percent increase in Boston’s Cambridge submarket since 2013.”

CBRE’s analysis found that regions with high concentrations of R&D jobs saw the highest growth in overall life-sciences job bases in the past 15 years. “That indicates continued strong growth for leading R&D markets” such as Boston, the San Francisco Bay Area, San Diego and Raleigh, North Carolina. “In contrast, markets focused more on the pharmaceutical and medicine-manufacturing industries, such as Chicago, Philadelphia and New Jersey, likely will grow at a slower pace than the R&D markets.”

A historically vibrant life sciences region, Philly still doesn’t quite measure up when it comes to venture capital. But that hasn’t prevented major deals from happening, including the expansion of Spark Therapeutics, plans by China-based pharma firm KPB Biosciences for a Philadelphia-area headquarters, and a $100-million investment in University City-based Tmunity Therapeutics.