Unafraid to ‘ruffle feathers,’ Poland is the engine of central Europe. 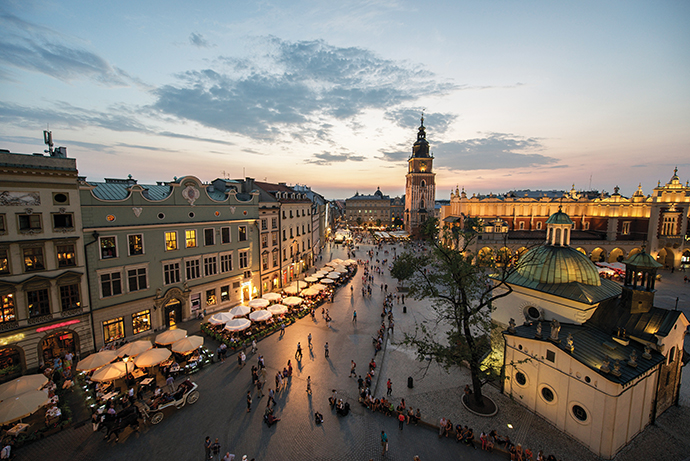 Picturesque Krakow is a Top 20 performer in a new ranking of European cities.
Photo: Getty Images
by GARY DAUGHTERS

Assessing the prospects for building a textile plant from scratch, one of three ambitious partners observes, “I have nothing, you have nothing, he has nothing: This means we have enough to start a factory.”

The optimism behind that idea propelled Solaris’s founders when they launched their operation from an empty warehouse near Poznan in 1996, under the name Neoplan Polska.

“It was a hall, with basically nothing there,” recalls Krystyna Wozniak, now a board member. “We were supposed to build a bus within two months, yet we didn’t even have a single machine.”

But a contract with the City of Poznan followed, and by 2000, the company was exporting buses to the Czech Republic, Germany and Slovakia. The newly named Solaris produced its 1,000th bus in 2002. In 2006, it was the first European bus maker to launch serial production of hybrids. Through 2017, a record year for Solaris, the plant near Poznan had churned out 15,000 vehicles, including hybrids, electrics and specialty coaches such as mobile blood collection units. The company now employs 2,500 people.

“Making money has no place for emotions and quibbles.”
— Dorota Dabrowska-Winterscheid, Managing Director, American Chamber of Commerce in Poland

The Solaris example typifies Poland’s rise as a manufacturing and export powerhouse at the center of eastern Europe. Since its transition from communism to democracy, Poland’s economy has grown at an average annual rate of 4 percent. It is the only European country that didn’t slip into recession after the 2008 financial crisis. The country’s half-trillion-dollar economy ranks it among the top 25 in the world and the sixth-largest in Europe, with exports from manufacturing accounting for one-third of Poland’s GDP.

In a ranking of Europe’s Best-Performing Cities (topped by London and Stockholm), the Milken Institute identified four of Poland’s metropolitan regions among Europe’s top 20, based on such factors as manufacturing, job and wage growth, and expansion of high-tech services.

Gdansk, ranked in the report as Europe’s fourth-best-performing city, has a strong base of international manufacturers such as Delphi, lured in part by the city’s Baltic Sea port. Other global multinationals with a presence in the region include Bayer, PwC and Intel, which runs an HR facility in Gdansk.

Wroclaw ranked sixth in the Milken report. Toyota makes hybrid, gasoline and diesel engines at two plants in the Wroclaw region, and Whirlpool in 2016 announced the establishment of a global R&D center there, and is investing close to $300 million in its Polish operations.

“The high level of education and technical talents in Wroclaw,” said Whirlpool’s Roberta Segalini, “represent a great opportunity for us.”

Poznan, ranked No. 17, is home to two Volkswagen plants and a German-owned bus plant that employs 660 people. Krakow, ranked 20th, is an emerging technology center that boasts a special economic zone for tech firms within Krakow Technology Park. Milken reports that the city supplies some 10 percent of Poland’s ICT jobs.

Conflict with the EU

Poland’s nationalist-leaning Law and Justice Party, which came to power in 2015, has earned condemnation and threats of retaliation from the EU through moves seen as undemocratic, including the packing of Polish courts with loyalists. EU sanctions could hurt, as Brussels finances some 60 percent of Poland’s public investment. More recently, the adoption of a law to criminalize allegations of national complicity in the Holocaust aroused the ire of US Secretary of State Rex Tillerson, who called it a threat to “freedom of speech and academic inquiry.”

Could politics intrude, and put a drag on Poland’s soaring economic trajectory?

“It’s perhaps made everybody a little more nervous than should otherwise have been the case,” says James Chapman, the Warsaw-based head of Central European Capital Markets for Cushman & Wakefield. “But the overriding evidence is the market has continued to grow at a strong pace. There are some things that have ruffled feathers outside of Poland, but we are not talking about a dictatorship that is alienating Poland from the rest of Europe or the world. I’m not sure if there’s a country that exists that doesn’t have some form of political risk.”

Dorota Dabrowska-Winterscheid, managing director of the American Chamber of Commerce in Poland, says that while the Law & Justice party has shown a degree of “favoritism” in promoting the growth of domestic enterprises, it remains committed to pursuing FDI.

“There’s a clear recognition that there’s a limit to how much Polish companies can perform because they’re smaller and younger. There’s a recognition of interdependency and the fact that you need the big corporations and global investors and their know-how and access.

“There’s lots of noise in the media,” says Dabrowska-Winterscheid. “At the end of the day, though, the Polish economy is doing great. There’s sanity from a business point of view. Making money,” she says, “has no place for emotions and quibbles.”