Down to the Crossroads

Transportation assets help companies and communities prosper in central and southern Indiana. So does the human touch. 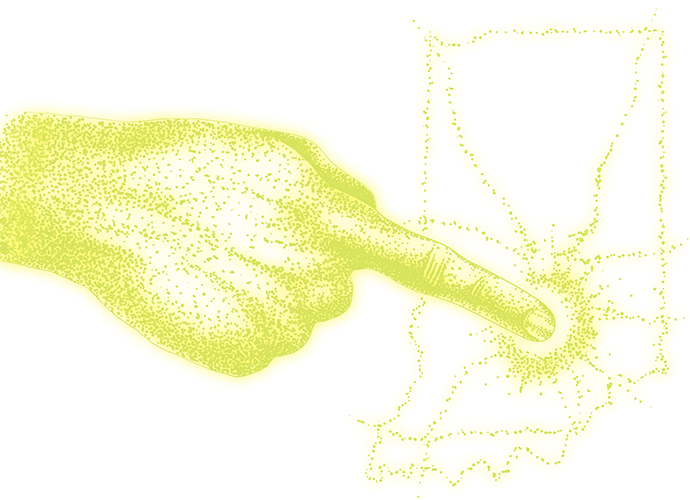 Thirty years ago in Greensburg, Indiana — way before Honda decided to build a 2,000-job plant there — another Japanese firm launched operations. It’s not going anywhere — in part because it’s easy to go everywhere.

GECOM Corp., a subsidiary of Japan’s Mitsui Kinzoku ACT, started producing various vehicle locking mechanisms and systems in 1987. Last year the company committed to a major investment that brings 30 new jobs to a site that employs about 800 today, making components for seven different Tier 1 automotive manufacturers. The expansion means a 750-kilowatt-hour load increase for Decatur County REMC, one of the 18 member electric cooperatives in central and southern Indiana and southeastern Illinois served by Hoosier Energy. But it means a lot more than that to the region, the company and its customers.

“Very few companies that build the type of products we build are vertically integrated,” he says. “We can stamp or injection-mold components and assemble those same components under the same roof. Having that vertical integration allows us to be very responsive to our customers — if they have to make a change, we can make that change very quickly.” Then the firm can move product quickly, whether it’s shipping to Toyota in Texas, Tesla in California or FCA, Ford and Subaru, all of which are within a five-hour drive.

The second reason? More than half the company’s employees in Greensburg have been there for 15 years or longer. “So there is a great amount of skill these folks bring to work every day,” Wright says.

That ideal blend of transportation and workforce advantages has helped GECOM’s 400,000-sq.-ft. operation stand the test of time, and stand out in the company’s global portfolio of sites.

The geographic scope of the site decision for the investment was originally larger, but proximity and an improving US business climate are driving a new trend. “Our customers want to bring things back to the United States.” The sentiment is even stronger since the U.S. Tax Cuts and Jobs Act was passed.

Also helping GECOM stay cost-competitive are increased automation, award-winning job training and certification programs in Indiana, and projects such as replacement of T4 and T8 light bulbs with LED lights. Wright’s team is about halfway through total replacement, helped by rebates from the REMC. Meanwhile, Wright is in early stages of replacing heat-treat and annealing furnaces that were installed in 1989 with more efficient units.

Just as important are the relationships annealed over three decades of doing business. “We’re a pretty small community, so most of the key players at REMC I know personally,” Wright says. Brett Abplanalp, the CEO of Decatur REMC, is a longtime acquaintance of Wright’s who used to work for him years ago. “They work very hard at minimizing the risk of outage for us,” Wright says. “They know the importance of us — and the other plants fed off the same line in this industrial park — remaining in production.”

In fall 2017 the Redevelopment Commission in Greenwood, Indiana, located in Johnson County just southeast of Indianapolis, began hearings about a $259-million FedEx Ground small-package distribution center that would encompass 608,000 sq. ft. on 236 acres and employ 80 full-time and 375 part-time workers. As that project moves toward a final land purchase, FedEx in late January 2018 announced that, in the wake of the U.S. Tax Cuts and Jobs Act, it will invest $1.5 billion to significantly expand the FedEx Express Indianapolis hub over the next seven years.

That’s the sort of project that reverberates throughout the already robust logistics network in the region.

“What it really does for many of our REMCs and their customers, especially on the distribution side, is allow more flexibility and time,” says Harold Gutzwiller, manager, Economic Development & Key Accounts at Hoosier Energy. “It really helps to extend time for packaging and pulling things together, and increases the productivity for those fulfillment centers.”

“Just this year, seven new industrial projects, mostly warehouse sites, have opened in our service territory,” including Newgistics and Wurth Service Supply, says Chet Aubin, the newly retired CEO of Johnson County REMC. They’re clustered in the Southpoint Business Park and 400-acre Precedent South Business Center developments in Greenwood. And a seven-building park on 350 acres on the city’s east side is on the table for city approval from GLA Properties.

Over Aubin’s 27 years, Johnson County REMC grew from 32 employees and 10,000 members to 58 employees and 26,500 members today. He’s seen layers of infrastructure come into play that have turned regions still known for fruitful agricultural operations into more diversified economies known as much for moving goods as for growing crops.

Gradually cities such as Greenwood and Franklin used TIF money to build out roads and sewer lines, Aubin says. In the early 2000s those efforts paid off with so much additional industrial load coming online that “we were able to go 10 years without rate increases because of additional load we were adding, and were able to spread the costs. Economic development really does help to control costs for the residential side.”

Johnson County REMC also made the commitment to take broadband from an internal backbone to full installation with speeds up to 10 gigabits in industrial parks, schools and commercial areas. But the more visible infrastructure of roads still gives the crossroads of America its name and its heft.

“With I-69 and I-65 both going through our service territory, and the east-west corridor with I-70 and I-74, it really does make us a center for distribution centers,” says Aubin. The tie-ins continue, with design having just been finalized for the final phase of I-69 through Johnson County.

“From the company standpoint, time to delivery, safety and accessibility all have improved,” he says. “But one of the often unrecognized issues is access to workforce. In Indiana in particular, because of the lack of traffic congestion, it’s not unusual for an employment radius to extend to 60 miles or more. That is, in essence, less than an hour’s drive. It increases the mobility of the workforce.”

And that increases the likelihood of companies mobilizing toward Hoosier territory. 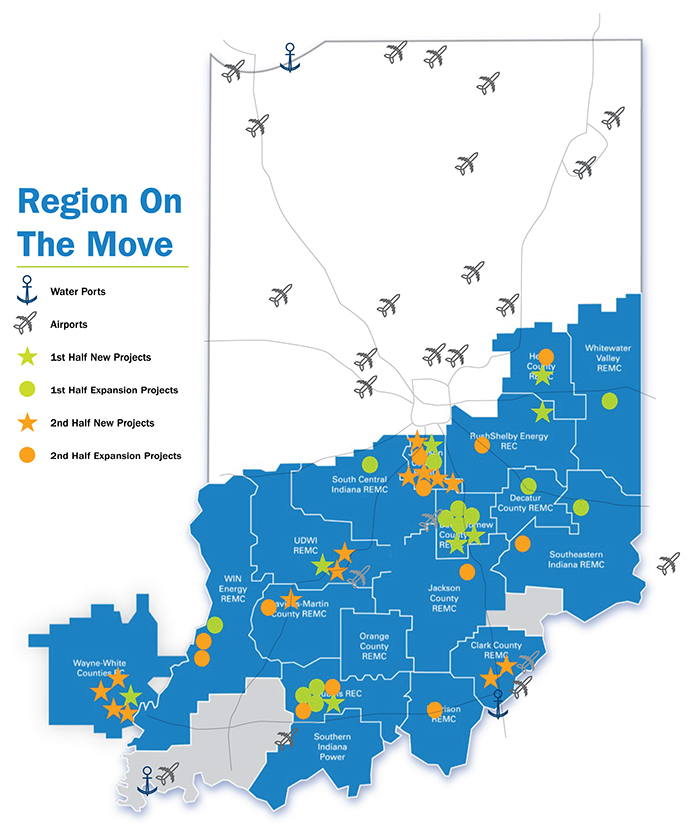 This map shows the locations of corporate facility locations and expansions in Hoosier Energy service territory in 2017. Surging logistics activity is supported by ports and airports in the state, in addition to a robust Interstate system.