On the outskirts of America’s first planned city, the master-planned Savannah Gateway Industrial Hub could write the region’s next exciting chapter. 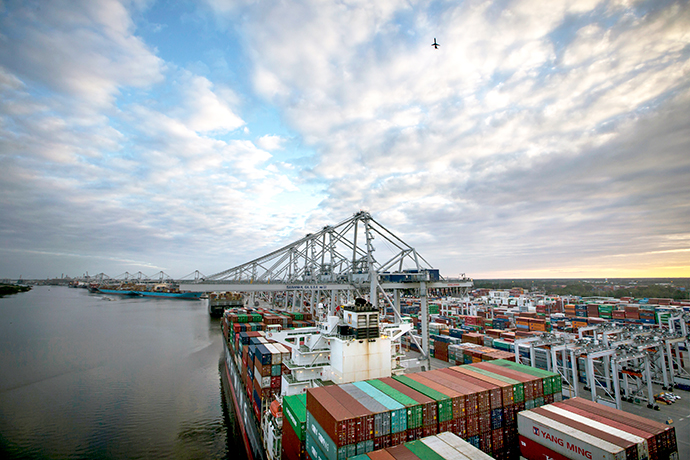 All ship-to-shore cranes are boomed down and working vessels at the Garden City Terminal at the booming Port of Savannah.
Photo courtesy of Georgia Ports Authority/Emily Goldman
by ADAM BRUNS

On 2,700 acres of land just outside Savannah, Georgia — where a paper company’s experimental forests once grew in lines as straight as railroad tracks — two Class I rail lines form part of an infrastructure grid destined to help a thriving regional economy reach the next level.

When I first visited the promising parcel in Effingham County a decade ago, it was called Research Forest, as area leaders sought to capitalize on the formerly rural area’s transformation into bedroom community for the booming port city.

Today the Port of Savannah (12 miles away) is the fourth busiest in the nation. The newly christened Savannah Gateway Industrial Hub, with CSX and Norfolk Southern mainlines at the ready, is positioned to deliver a place on the outskirts into the next circle of prosperity.

Driving the action is the industrial development team from Denver-based OmniTRAX, an affiliate of The Broe Group whose ventures in last-mile logistics have progressed from moving goods by short-line rail to developing places where those goods can be manufactured and distributed. The firm is working in partnership with the Effingham County Industrial Development Authority (ECIDA).

“This is a monster of a site,” says Mike Martin, the company’s Atlanta-based vice president of industrial development. “You cannot duplicate this property on the entire Eastern Seaboard,” he says. “And the great thing about our property is it’s construction-ready,” Martin says.

The next great thing? The site was certified in January 2018 as a Georgia Ready for Accelerated Development (GRAD) site by the Georgia Department of Economic Development (GDEcD). “The GRAD designation for the Savannah Gateway Industrial Hub means that it can truly compete on a global stage for new industry and the accompanying jobs,” said GDEcD Commissioner Pat Wilson.

The Hub team is working closely with Georgia Power to attract tenants to what is the largest GRAD site within 15 miles of the Port of Savannah. “The GRAD designation is a great validation point for the Savannah Gateway Industrial Hub, showing potential tenants the site is well positioned to serve all their infrastructure needs,” said Kevin Shuba, CEO of OmniTRAX.

In a letter supporting the GRAD process, Aubrey Brown, who heads CSX Industrial Development’s Atlanta office, said the railroad would be able to provide service five days a week to any customer at the development, and that it should take just six months to install a new turnout and accompanying private sidetrack to serve a new customer.

“It’s zoned, entitled, and has all the necessary infrastructure a large manufacturer would need today, not five years from now,” Martin says, including natural gas, 500-KV electric service and a 36-inch water line. And the dual Class I rail is rare enough to be a deal clincher. CSX and Norfolk Southern provide Class 1 service to the Hub, and OmniTRAX provides switching services.

In addition to the potential for developing a megasite, the Hub offers various site configurations and lot sizes available for lease or purchase, with build-to-suit options as well as site planning, engineering and track design and construction services; the two-lane Effingham County Parkway due to be complete in 2021; and proximity to I-95, I-16 and State Route 21.

The development and its infrastructure couldn’t arrive at a better time: Nearly every piece of land within 10 miles of the port is developed or under development. The Hub also fits nicely with the Georgia Ports Authority’s new $126.7-million Mason Mega Rail project, which will connect the Mason and Chatham rail yards at the Port of Savannah’s Garden City Terminal. Eighteen new railroad tracks will add 97,000 feet of new rail. The new terminal will allow 10,000-foot trains to be loaded at the terminal with containers double-stacked. Those trains will increase the capacity from 500,000 container lifts per year to 1 million.

Among the less visible aspects of the site is its place in the overall terrain, which Martin describes as a dome of sand slightly elevated from the area’s more typical coastal-region wetlands. Avoiding costly replacement of mud with sand could save users as much as $100,000 an acre in development costs.

“It’s more or less a turtleback shape, which lends itself very much for development,” says C.J. Chance, principal at Hussey Gay Bell, the design firm founded in Savannah in 1958 that master-planned the Savannah Gateway Industrial Hub and has worked with county officials for years. 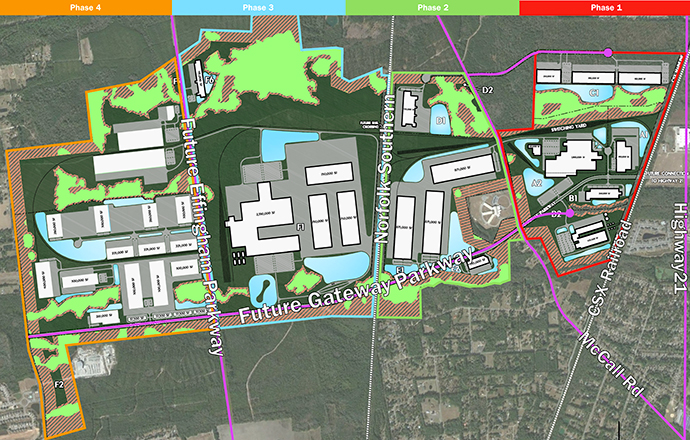 Phase 1 of the Savannah Gateway Industrial Hub is 160 acres, but the entire site contains well over 2,500.
Schematic courtesy of Hussey Gay Bell

“As far as this site being a catalyst,” he says, “at the risk of over-dramatizing it, you have two Class I rail lines, a high-pressure gas line through the middle of it, distribution-grade power, a 36-inch water transmission main on the western boundary, easy access to the port by rail and vehicle, nearly frontage on a state road, and a new corridor being constructed by the Georgia DOT through the middle of the site. It checks the boxes. Once it gets rolling, it’s going to be a great economic impact for the entire region, not just that one area.”

Mike Martin of OmniTRAX couldn’t agree more. Logistics jobs are great, but the sort of manufacturing jobs Savannah Gateway is designed to attract could move more than just goods — they’d move the needle. 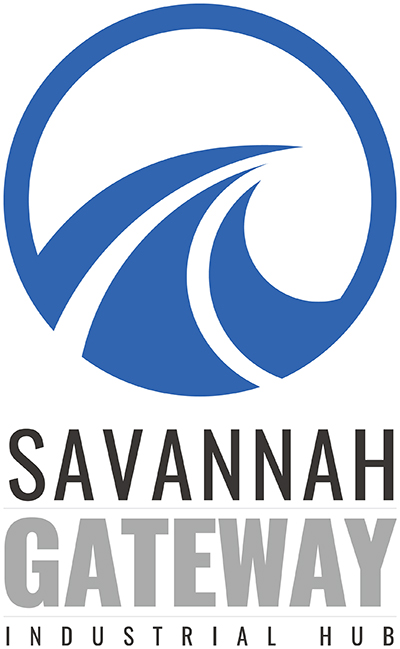 “Manufacturing people really think long term,” he says. “This will transform the community. In Effingham County, over 80 percent of the population gets up and drives somewhere else to work. This development can create wealth and jobs not only for the current generation, but for their sons and daughters who will grow up and stay in the community.”

This Investment Profile was prepared under the auspices of OmniTRAX. For more information, contact Mike Martin at 404-550-9888 or mmartin@omnitrax.com, or visit savannahgatewayindustrialhub.com.