Mapping the Course of
Job Creation

Those projects, and dozens more, are catalogued in vivid relief on an “Interactive Job Creation Map” unveiled in December by the Arkansas Economic Development Commission. The time-lapse imagery tracks announced corporate projects from the start of 2015 through the end of 2017 (Gov. Asa Hutchinson’s term in office thus far) and reveals, among other facts, that the state created 15,834 new jobs during the three-year period through agreements between the AEDC and 322 new or expanding companies. 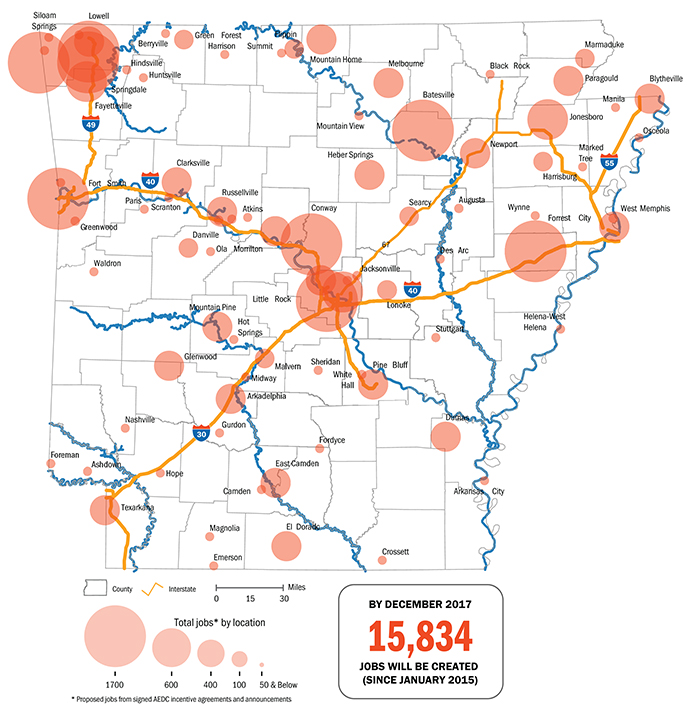 A passing glance reveals where job creation has been most robust: Little Rock, Fayetteville, Fort Smith, Jonesboro and Batesville. “This map,” says Hutchinson, “tells the story that Arkansas has been writing over the past three years.”

New Orleans bagged a big one in November, when Virginia-based DXC Technology announced plans to establish a 2,000-job Digital Transformation Center in the city’s heart. The number of permanent jobs to be created at the single downtown site is higher than any prior economic deal in Louisiana. DXC is to hire 300 IT and business enterprise professionals during 2018, then ramp up to 2,000 jobs over five years with an annual payroll exceeding $133 million by 2025.

To help meet DXC’s workforce demand, the State of Louisiana agreed to fund a $25-million higher education initiative to expand the number of degrees awarded annually in computer science, management, science, technology, engineering and math. That project represents the state’s largest higher-education investment in a private sector workforce partnership, and mirrors a similar commitment made years ago when IBM invested in Baton Rouge.

In December, DXC announced it had signed a lease to set up shop in the Freeport McMoRan Building on Poydras Street. The company will occupy two floors of the building initially, with an option to expand to up to 10 floors.

Kratos Makes a Move into Oklahoma

Oklahoma City is rolling out the red carpet for Kratos Defense & Security Solutions, a California-based drone manufacturer that recently announced contracts totaling $116 million from the Army and an unnamed customer. Kratos plans an initial investment of $8 million and plans to move at least 350 employees and part of its engineering, design and manufacturing operations to OKC. The company is reportedly looking for a permanent facility near Tinker Air Force Base.

The aviation and aerospace industry, second only to energy in Oklahoma, supports 206,000 jobs and $11.7 billion in payroll, according to the Oklahoma Aeronautics Commission.

The Texas Small Business Rebuild Initiative announced a plan in January to provide zero-interest loans of up to $25,000 to small businesses impacted by Hurricane Harvey. The initiative was announced by Governor Greg Abbott and representatives from Goldman Sachs, LiftFund and the Rebuild Texas fund.

The disaster zone left in Harvey’s wake includes some 800,000 small businesses. According to FEMA, more than 40 percent of businesses never reopen after a disaster. Of those that do, 29 percent fail within two years. “Our small business owners, who are critical to our economy, are still suffering five months after Hurricane Harvey,” said Houston Mayor Sylvester Turner. “I applaud the $7-million initiative, which will help hundreds of small business owners get back on their feet.”