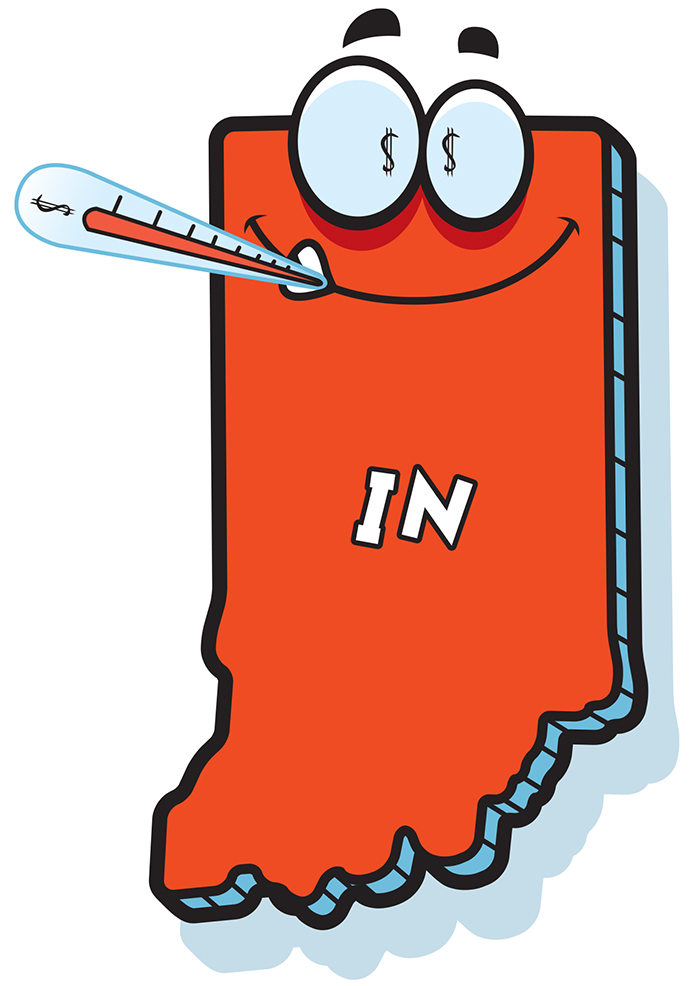 An economist weighs in on where Indiana ‘compares favorably’ to other states, among other topics.

The Indiana Business Review (IBR), a publication of the Indiana Business Research Center at IU’s Kelley School of Business, predicts economic growth for the state in the year ahead. But will it be slow and steady growth or something more robust? And how is Indiana doing relative to other Midwest manufacturing states? Ryan M. Brewer, Ph.D., Associate Professor of Finance, Indiana University Division of Business, Indiana University–Purdue University Columbus, has some thoughts and analysis on those topics and others. Following are excerpts from his article, “Indiana’s Outlook for 2018,” which appears in IBR’s Winter 2017 edition:

For 2018, we expect to see growth between 2.0 percent and 2.8 percent. Whether we end up near the higher end of the scale or the lower end … depends on several external factors, such as U.S. tax reform, Federal Reserve action, free trade agreements, immigration labor policies, international stability and inflation, as well as other factors more within the control of Hoosier leaders.

Although recent years have produced slow economic growth without much variance, growth experienced during the recovery here in Indiana certainly has not knocked us out of our economic socks. In spite of our slow growth, Indiana’s numbers have generally compared favorably to those of other states. Over the last seven years (2009 to 2016), Indiana’s seven-year growth in chained-dollar, or “real,” gross domestic product (gross state product, or GSP) has ranked 15th in the country at 14.7 percent (2.0 percent annual growth), according to the U.S. Bureau of Economic Analysis. The U.S. leader over the period has been North Dakota, with 46.6 percent real growth achieved over the seven-year period — but it’s difficult to compete with oil shale fields and a new oil pipeline.

On the private sector’s contribution to gross state product:

In Indiana, the lion’s share of GSP aggregates from compensation and returns to capital generated by the various industries across the state, each having a unique performance profile, with government in our state taking a small share of total output. In 2015, the private sector of the Hoosier state accounted for 91 percent of economic activity, while the government comprised the other 9 percent. As a comparison, the United States’ private sector measured at 88 percent of total output, with government expenditures coming in at 12 percent, implying government’s share of economic activity for the U.S. as a whole is 33 percent higher than the level of government in Indiana. 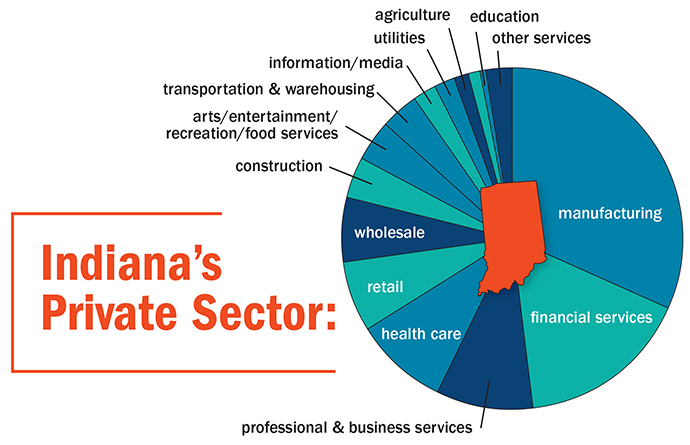 “Growth experienced during the recovery here in Indiana certainly has not knocked us out of our economic socks. In spite of our slow growth, Indiana’s numbers have generally compared favorably to those of other states.”

A risk for economic growth in Indiana is that durable goods manufacturing is expecting to see headwinds through 2018, as we approach what some feel will be a plateau in North American auto and light truck sales. Buoyed by robust new car and light truck sales increases between 2010 and 2016, the recovery from the Great Recession in Indiana has been supported, with steady increases all decade, leading to nearly 17.6 million auto units sold in 2016, representing the highest number of units sold in history. Forecasts for 2017 and 2018 auto sales in the U.S. are mixed. Forecasts from auto industry experts prior to the recent hurricane season expected to see declines in new car and light truck sales this year and next.

Indiana is generally on track for economic growth in 2018, likely somewhere between 2.0 percent and 2.8 percent.

Yet, with a hurricane effect bump arising from the roughly 500,000 cars and trucks that were destroyed by Hurricane Harvey in Texas in summer 2017, this industry expects to gain traction. Annualized September 2017 sales numbers in the U.S. were 18.9 million, yet this is, of course, unsustainable. The temporary sales increase should materialize between September and December 2017, and somewhat during the first part of 2018, as damaged cars are replaced. The record level of sales in the U.S. in 2016 may ultimately be the automotive plateau some have been suggesting, while 2017 numbers are expected to be less, in spite of the hurricane bump. The nearly decade-long auto sales expansion is finally beginning to show some signs of age and higher mileage.

Indiana is generally on track for economic growth in 2018, likely somewhere between 2.0 percent and 2.8 percent … Indiana leaders may want to consider the following concerns:

Dr. Brewer’ full economic analysis, including footnotes, can be found at www.ibrc.indiana.edu. 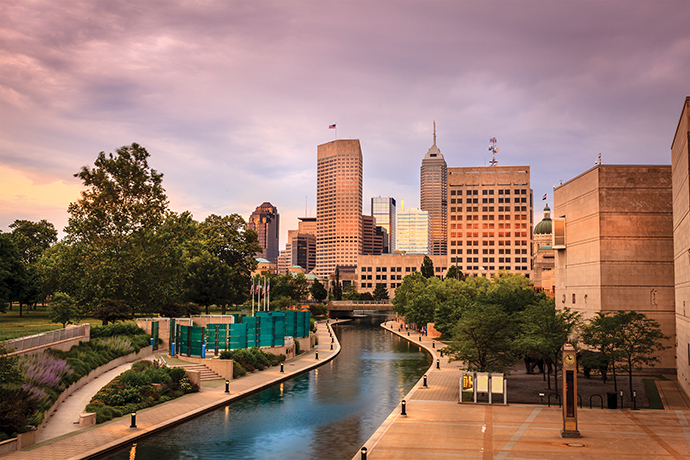 Just because Indiana had a banner year in 2017 where new jobs are concerned, and just because state leadership expects to see about 1 million more jobs created in the next decade, now is no time to be complacent. That’s the gist of Gov. Eric Holcomb’s 2018 Next Level Agenda, which he outlined in Indianapolis on November 8th. The Hoosier State gained nearly 29,000 new jobs last year, noted the governor.

“In 2018, I will remain sharply focused on building our workforce and other key issues that affect Hoosiers most — jobs, economic growth, health, infrastructure, and government service. I look forward to working closely with state lawmakers and other stakeholders in the year ahead to advance this plan.”

The 2018 Next Level Agenda includes five pillars outlining both legislative and administrative priorities for the year ahead. Following is an outline of the Agenda from the governor’s office:

2. Maintain and build the state’s infrastructure. After advancing an historic long-term road funding plan in 2017, Gov. Holcomb’s 2018 agenda focuses on better managing the state’s water resources, expanding our global economic presence with a fourth port, and improving broadband access, speed and affordability where it’s needed most.

4. Attack the Drug Epidemic. Gov. Holcomb’s agenda continues Indiana’s attack on the opioid epidemic by strengthening enforcement, expanding recovery options and making it easier for Hoosiers to locate and access treatment. Additionally, the 2018 Next Level Agenda calls for improved reporting and monitoring as well as a stronger focus on programs that help reduce infant mortality rates in our state.

5. Deliver Great Government Service. Great government service remains the cornerstone of Gov. Holcomb’s Next Level Agenda. With that in mind, Indiana will continue its history of strong financial management and maintain healthy reserves in 2018. The agenda also calls for a new parental leave policy for state employees, streamlined and simplified processes for citizens to interact with state government, and better outcomes from large-scale IT projects to improve state government service.

In late February, GEICO announced plans to expand its operations in central Indiana, creating up to 1,474 new jobs by the end of 2022. The Washington, D.C.-based automotive insurer will invest more than $16 million to expand and enhance its 109,000-sq.-ft. (10,100-sq.-m.) space in Carmel to accommodate its growth plans. The company’s office will nearly double in size after an expansion that will add an additional 104,000 sq. ft. (9,660 sq. m.), allowing GEICO to add information technology (IT) and claims positions to its existing sales, service and emergency roadside operations.

Indiana’s biggest capital investment projects by jobs of 2017 are: