The Intangibles of Cool 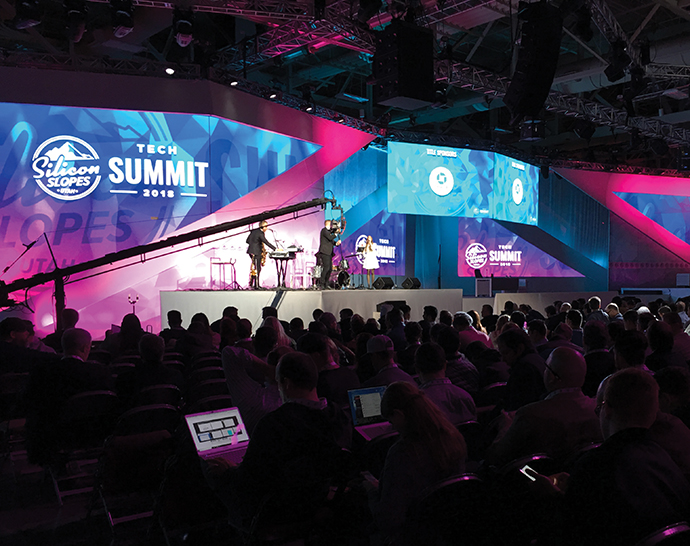 More than 14,000 tech and entrepreneurial leaders gathered in late January 2018 in what many boasted is the coolest spot on earth for technology and innovation:

Not Silicon Valley, but the Wasatch Valley, scene of the Silicon Slopes Tech Summit, which, in only its second year, drew a throng so large that Summiteers — tatted, bearded, bro’ bumping, and in every known shade and make of Nikes — spilled from a cavernous ballroom and into backup halls at the Salt Palace in Salt Lake City, Utah.

In a handful of years, the state has gone from tech contender to tech supernova, with no fewer than five home-grown startups at the head of the IPO pipeline. Qualtrics (experience management) and Domo (business management) both are valued north of $2 billion. InsideSales (sales acceleration), Pluralsight (tech training) and Vivint (smart home technology) are certified unicorns, with valuations of at least $1 billion.

That’s pretty cool for a state of 3 million people, and more narrowly, for the 80-mile stretch known as the Silicon Slopes, from Provo in the south, past burgeoning Lehi and the capital Salt Lake City to Ogden, just north of the Wasatch Front. Long known for its snow-peaked outdoor adventure, the Slopes has become the tech oasis of the Intermountain West.

“When I moved here 20 years ago,” says Cathy Donahoe, Domo’s VP for Human Relations, “the number one job code was for truck driver. Now it’s software engineer. Those of us who work in technology are like a proud parent of what’s developed. I look at the growth and we’re not looking in the rear-view mirror. We’re looking ahead.”

Cool on the Rise

Microsoft, Adobe and Oracle all have bases in the Silicon Slopes. The startup scene, the next generation on the rise, includes Lucid Software, Chatbooks, Peek and Podium, a business management platform started three years ago in a spare bedroom in Provo.

Podium founder Eric Rea says he designed his product with his father, a tire store owner, in mind.

“He’s trying to run the business, and the last thing he wants to have to worry about is technology, because he’s busy selling tires and fixing cars,” says Rea.

“The Silicon Slopes has an opportunity be a lot like South by Southwest, only bigger.”
— Carine Clark, Pres., CEO, Banyan

Rea tells Site Selection he was urged by his investors to “take a look” at San Francisco, Seattle and Austin, but says, “We’ve always felt that Utah is the place where we’re going to build this. This is where the talent is coming.”

While Rea trumpets the famed collegiality of the Utah tech scene, Adobe Creative Director Josh Souter, who’s worked in San Jose and New York, says moving to Lehi, with its lower cost of living, allowed him to build his dream home. Programmer Jac Madsen says he can watch the sun set from a mountaintop minutes from work, rather than at his desk, as it was in Silicon Valley.

“Utah,” says Madsen, “is much less jealous of my life.”

Everyone talks about the great outdoors, about the ease of their commute, the family-friendly neighborhoods, the low cost of living and the good schools. And they marvel at the growth of the tech scene.

“I think it’s real,” says Karl Sun, the former Google executive who founded Lucid Software in 2010 and set about disrupting Microsoft Visio with an on-line visualization and collaboration platform.

“There are a lot of people who see what’s going on here,” says Sun. “My hope is that as we continue to grow and get more on peoples’ radars, we will keep the unique things that make this a great place to work.”

The Silicon Slopes Tech Summit coincided with the Sundance Film Festival up the mountain from SLC in Park City. Like Sundance, the Summit offered a constellation of stars, but from the tech world instead of Tinseltown: Stewart Butterfield, founder of Flickr and now the messaging application, Slack; Ryan Smith, CEO of Qualtrics; Domo’s Josh James; British entrepreneur Ruzwana Bashir, founder of Peek; Vivint CEO Todd Pedersen; and Carine Clark, president and CEO of Utah-based Banyan, a high-growth tech company. (Just for good measure, Mitt Romney turned up too.) 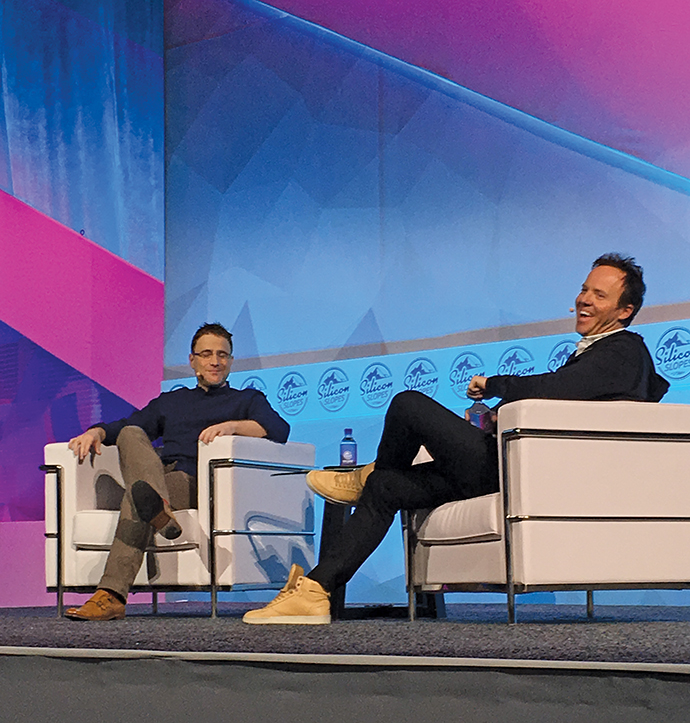 Clark is an unabashedly big thinker, a feature that seems inherent to the Utah tech community.

“The Silicon Slopes,” says Clark, “has an opportunity be a lot like South by Southwest, only bigger. This summit could draw 40,000 to 50,000 people in a few years.”

Clark, a former Utah CEO of the Year, is a long-time player in the state’s tech ecosystem. Ruzwana Bashir, by contrast, sees the Slopes from the outside in, having only recently established a Utah office for the expanding Peek, a travel adventure company based in San Francisco. Peek currently employs 40 people, many in sales, at its regional center outside Salt Lake City.

“One of the things that’s special in Utah,” Bashir tells Site Selection, “is that sometimes people have unusual directions. Maybe they won’t have gone to college, but they’ll be excellent in sales. So, you’re getting access to a workforce that doesn’t have the exact same route into doing what you do.”

The fact that Utah speaks more than 130 languages helps give it entree to the globe, as does the state’s long tradition of overseas service.

“Because of the influence of the Mormon church,” says Clark, “a lot of folks have gone off for 18 months or two years, and they come back having seen other parts of the world. They know that the world is bigger than just Salt Lake.

“Part of the tech community’s culture,” reflects Clark, “is that we’re all about abundance. We’re pioneers. We’re explorers. The people that settled the state walked across the country. We’re a hearty group.”

Governor Gary Herbert is serving his second full term in office. A Republican, Herbert is of moderate politics and modest demeanor.

Herbert, hosting a breakfast of mayors of the Silicon Slopes and national business figures, recalls with conviction the Sundance movie he’d seen the night before, the one about the late children’s TV host, Mr. Rogers. “We have a lot of Mr. Rogers in Utah,” says Herbert. Not without cause, Herbert calls Utah the “smiley-face state.”

A devout Mormon, accomplished athlete in his younger years and still an avid tennis player, Herbert, 70, gets along famously with Utah’s unicorns and is known to socialize among them.

“Even Republicans and Democrats get along here,” Herbert tells Site Selection. “In Utah, we campaign as partisans, but once we’re elected, we take off the labels and we join the common sense party. So, we get things done in Utah.

“We feel like this is the place. This is where the talent is coming.”
— Eric Rea, CEO, Podium

“I’m not anti-government,” says Herbert, a tax slashing Republican. “But we recognize that government is a monopoly. If you’re in business, you have to improve or otherwise you’ll lose profitability and market share, and eventually you’ll be out of business. Government doesn’t have that problem,” says Herbert. “We always know where to get more money, just come to the taxpayers and we’ll survive whether we’re good, bad or indifferent. Well, not in Utah.”

For Podium’s Eric Rea, state incentives were a factor in deciding to grow his business in Utah. He says the lack of red tape helped, too.

“We found out there was a tax credit available,” says Rea. “We spent a weekend filling out the paperwork. We presented it to the committee and they accepted us. The whole process took less than a month. We feel really supported by the state government here.”

“The state really wants to help us grow,” says Lucid Software’s Karl Sun. “They’re very helpful in everything from helping us think about where we want to locate, to making introductions, to making sure that the state has the ability to help attract the right kinds of talent through its marketing and outreach.

“Across the board, it’s a friendly state for businesses,” says Sun. “There’s not a lot of regulation or red tape that we’ve had to deal with in terms of locating or employee issues or rules and regulations from the legislative side. They keep in mind what impact that has on businesses, especially small and growing businesses.”

From the main stage of the Silicon Slopes Tech Summit, Vivint CEO Todd Pedersen asks for a show of hands. How many people from Utah? Less than a quarter of the thousands in attendance respond. 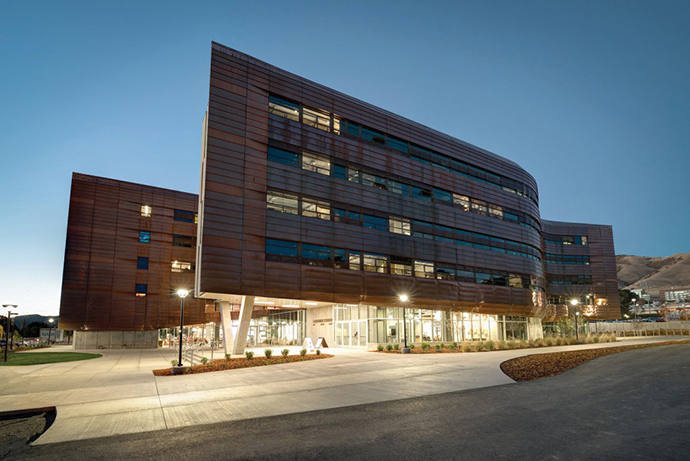 Utah has an advantage many states might envy. Its population is growing. People are coming in.

But it’s also worth noting that, among others on the scene, Pedersen, Pluralsight’s Aaron Skonnard and Josh James of Domo all studied at Provo’s Brigham Young University. Utah’s pipeline of talent has multiple funnels to it.

“Within a 30-mile radius of our building we have three universities that have 30,000 students each,” says Podium’s Rea, meaning BYU, the University of Utah and Utah Valley University. “It’s an awesome source to draw from.”

The University of Utah, which clings to a mountainside overlooking Salt Lake City, is piping in a new generation of tech entrepreneurs from its $40-million Lassonde Studios, a five-story residence and innovation space that has already launched such student-run ventures as Boundary Backpacks, which has produced more than $1 million in sales of its modular carry gear. Architectural Digest named Lassonde one of “the world’s best new university buildings” in 2016.

At a table on Lassonde’s ground floor, right around the corner from a bank of 3D printers, sophomore Zack Anderson quietly assembles another pair of the custom skis he sells in his spare time as a sophomore mechanical engineering student. His studied focus recalls the words of Vivint’s Pedersen, spoken from the stage of the Summit.

“You’ve got to build the product that makes the biggest difference. You can’t be great overnight. In order to really do something,” says Pedersen, “you’re just going to have to grind.”

This Investment Profile was prepared under the auspices of the Utah Governor’s Office of Economic Development. For more information, contact GOED’s Aimee Edwards at (801) 538-8680, or www.business.utah.gov