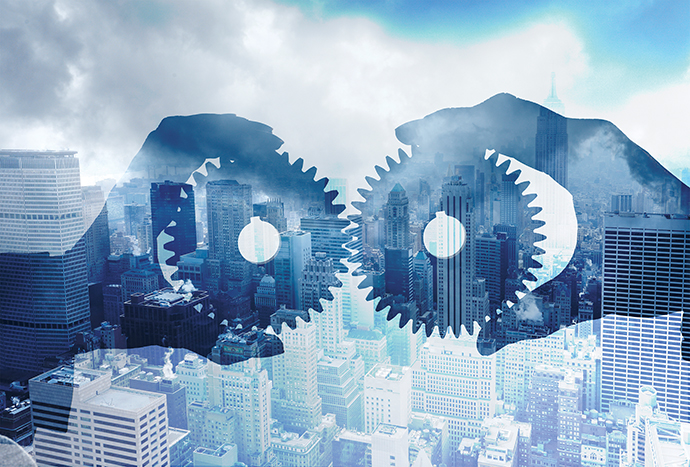 The Council of the Great Lakes Region (CGLR) last August noted that the region "accounts for more than 50 percent of all U.S./Canadian bilateral border trade and sees over 200 million tons of cargo shipped annually. If it were its own country, it would have a GDP of US$6 trillion — making it the third biggest economy in the world."

In an interview, Council of the Great Lakes Region President and CEO Mark Fisher says the region's economy could be even bigger.

"It's a region that supports roughly 51 million jobs," he notes, equivalent to one-third of the combined US and Canadian workforce. Manufacturing continues to be the region's strong suit, he says, but a shift to services has taken place.

"Over the last decade or so, we've lost upwards of 1 million jobs in manufacturing, but easily gained those jobs back and then some in health care and education," Fisher says. Moreover, "we're seeing the services and innovation economy take hold in a number of metro areas — Buffalo, Cleveland, Milwaukee, Chicago, Detroit."

The freshwater itself continues to be a lure. Though where you draw boundaries means a lot.

In Foxconn's case, the company's chosen location in Wisconsin happens to be barely outside the Great Lakes Basin watershed, near Racine, meaning the 7 million gallons a day it wants to withdraw from Lake Michigan to help make liquid crystal displays will need approval by Wisconsin's Department of Natural Resources, which will have to make sure the agreement is in compliance with the multi-state Great Lakes Compact. A decision is expected by the end of May.

Fisher says the presence of all that water is absolutely a positive, and says in cases such as Foxconn's, "we have to be pragmatic in how we look at water use and withdrawals. Our general view is as long as there's a strong commitment to sustainability, and water is being returned in just as good a state as when it was drawn out, there is huge potential for drawing business. You just have to be smart about it. Whether they're Democrat or Republican, people care a lot about their water."

Fisher sees Foxconn as a test case for how the region manages the discussion. "Industrialization degraded a number of areas in the region," he says, "and I don't think anyone wants to repeat that." Outright rejection may not be the right course either.

"If we don't do it right," Fisher observes, "it may dissuade some businesses from looking at the Great Lakes as an investment opportunity."

The Great Lakes region finds itself at the nexus of other hot-button national issues, such as immigration policy, NAFTA renegotiation and the new tariffs proposed by the Trump administration. Fisher says the view from CGLR members is that if imposed, the tariffs "would have a significant negative impact on the region's economy" which he describes as "by far one of the largest and most important regions in terms of iron ore mining through to steel and aluminum production."

Users of those metals are leading the way in cross-border collaboration, with the Ontario-Michigan effort in autonomous vehicle R&D at the forefront. Fisher says, however, that the aerospace, life sciences and energy clusters in the region could stand some improvement in cross-border activity. But there is progress in other areas.

In March, the CGLR and the Midwest Big Data Hub in Illinois announced a cooperation agreement called Great Lakes 4.0, supported in Canada by the SOSCIP R&D Consortium and IBM Canada Ltd., designed to accelerate the commercialization and development of breakthrough ideas and technologies using capabilities in data science, predictive analytics and high-performance computing.

"It could be the most powerful cross-border innovation platform in the world," Fisher says. "It just takes a bit of vision and elbow grease to get policy makers and decision makers to the table and get beyond just manufacturing, and the auto-based economy."

Going next level is also on Fisher's mind when it comes to NAFTA renegotiation.

"I hope the modernized NAFTA will provide the scaffolding that will allow regions like the Great Lakes to further integrate and connect key industry clusters across the board, and also take advantage of the innovation potential that exists in cross-border regions like the Great Lakes. Frankly, other parts of the world are already doing it — look at the EU, and the way emerging economies in Asia are aligning themselves. Economies are becoming regional and cross-border in nature. NAFTA needs to provide us the opportunity to move our work seamlessly across the border, whether it's goods or talent."

What does Fisher say to those who view too much of that talent as under the sway of unions?

"We're entering a period of time when more and more companies and unions are trying to see how they move forward as part of a partnership," he says. "We saw that play out in the restructuring of the auto sector over the past 20 to 30 years. That experience can be applied across the region in terms of how companies and union leadership work together.

"We're all facing a demographic headwind," he says. "Access to high-skilled talent is a growing problem for everybody. We need to produce that talent for the current and future economy. Part of it is homegrown, and some can be drawn through immigration. We are not going to grow as a region if we can't answer that demographic challenge."