Pork Facility is at the Crux of National Policy Debates 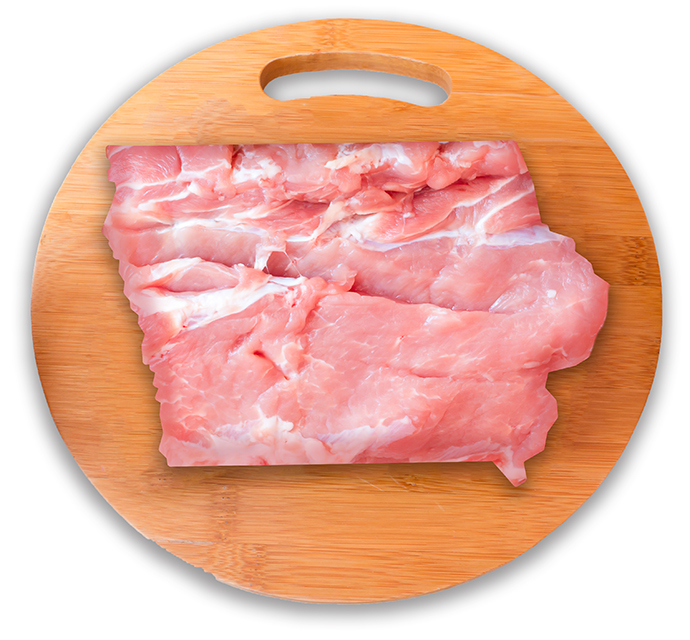 "We are disappointed that China has placed an additional 25 percent tariff on U.S. pork exports."

So said the National Pork Producers Council on April 2, after China announced retaliatory tariffs in reaction to new U.S. tariffs on steel and other products.

"Exports are extremely critical to the financial well-being of our producers," the NPPC continued, noting that the U.S. is the world's No. 1 pork exporter, shipping to more than 100 nations. Last year, nearly $6.5 billion of U.S. pork was exported — China got more than $1 billion of that, part of nearly $20 billion in total U.S. agricultural exports to the country in 2017. Iowa exported $34 million in meat products to China in 2016, part of 254-percent growth in exports there since 2006, according to the U.S.-China Business Council.

At the same time, another national issue in the headlines — a reduction in foreign-born workers due to changes in immigration policy — could mean reduced overall demand for workers and decreased agricultural output as farmers abandon labor-intensive operations.

"The U.S. pork industry needs access to a legal and productive workforce," said NPPC President Jim Heimerl, a pork producer from Ohio. "And skilled and unskilled foreign workers have been crucial to maintaining and growing the workforce and revitalizing rural communities across the United States. We need more of them, not less."

Seaboard Triumph Foods in September 2017 opened a massive new $350-million, 950,000-sq.-ft. (88,255-sq.-m.) pork processing plant in Sioux City, Iowa, that aimed to employ 1,100 on one shift at full production. At full one-shift capacity, the facility processes upwards of 10,000 head of market hogs a day. Approximately 30 percent of the market hogs at the Sioux City plant will be sourced from regional farmers. The remaining hogs will be supplied by Triumph Foods producer-owners and Seaboard Foods' farms.

In an interview at the plant in March, prior to the Chinese tariffs, Mark Porter, COO for Seaboard Triumph, said there were well over 1,200 employees on staff now, with daily totals averaging between 9,200 and 9,500 head. "We continue to hire and grow — we're now hiring for a second shift. Most of our export market is now open," he said, with final audit approval for export to China and Japan expected from the USDA by late March. "We want to get China open first. It means the products we're currently packing off and selling domestically go to the Chinese market, and our profit margins go up significantly."

The potential of the Chinese market is evident in the lengths the operation and its network of suppliers go to to satisfy that market's needs.

"Most products we call offals — front and hind feet, ears, tongues, hearts — are things that in the U.S. don't command a premium," Porter explained, "but in the Chinese market, they're considered delicacies and command a premium."

The specifics of the market work their way back into production and packaging, he says, noting a specific packing pattern for hog feet in a box. And they work their way into the product itself, when it comes to a beta-agonist digestive aid called ractopamine.

“Skilled and unskilled foreign workers have been crucial to maintaining and growing the workforce and revitalizing rural communities across the United States. We need more of them, not less.”
— Jim Heimerl, a pork producer from Ohio and president of the National Pork Producers Council

"It encourages the body to preferentially deposit lean and shed fat," he said. "China and a significant number of countries have banned it. So any of the meat they import has to be ractopamine-free. Both parent companies at Seaboard Triumph made the decision to be ractopamine-free several years ago. That was a huge commitment for the farmers — we have a pretty robust testing protocol that the incoming hogs will meet the high requirements of the Chinese specification."

Seaboard Triumph exports about 30 percent of its products, a level the Sioux City operation hadn't yet reached in March as the approvals for China and Japan hung in the balance. Porter said growing exports to an even higher level "depended on trade and what evolves at the federal level. There's definitely a desire to see that grow."

With unemployment at such a low ebb that the region is considered "full employment" for all intents and purposes, "second shift hiring is going to be a much bigger challenge for us," Porter said. "So we've put on a full-court press to go after that second shift, to see whether or not we can stay on schedule for second-shift ramp-up."

That aggressive approach includes encouraging people to relocate from elsewhere to Sioux City, and pursuit of work visas and specialized skill visas, especially from Mexico and Canada.

Asked if the company, like many around the U.S., is specifically pursuing recruitment in hurricane-struck Puerto Rico, where unemployment in early 2018 was nearing 11 percent, Porter says, "We're in Orlando-Kissimmee intending to recruit Puerto Ricans displaced by the hurricane. We're paying attention to the national stage with regard to workforce. We'd love to see them recruited to Sioux City. If they come to work for one of the other employers in the area, that works for us too."

The operation's payroll and property taxes already have made a significant economic impact on the region. And that doesn't even count the contractors and suppliers Seaboard Triumph has engaged for such things as pallets, cafeteria service, conveyor belt work and uniforms.

Looking out the window of the site's conference room, Porter points to a formerly empty spec building across the way that is now home to his pallet supplier. "Right next to him is about to be a related truck wash — a local businessman partnered up with two of my parent company's hog producers to build it. It will wash 100 percent of the trucks that come off this property. So just looking out the window we can see the ripple effect."

It remains to be seen how many trucks, shipments and jobs will be affected by the ripples of U.S. policy decisions. 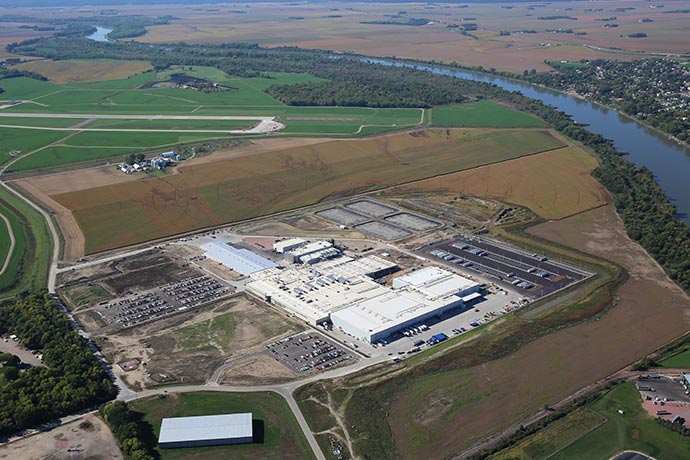 Exports to China are part of the growth plan at this massive new pork processing plant on the banks of the Missouri River near Sioux City, Iowa.
Photo courtesy of Seaboard Triumph