Into the Fast Lane

Northwest Ohio’s automotive sector is accelerating into the future. 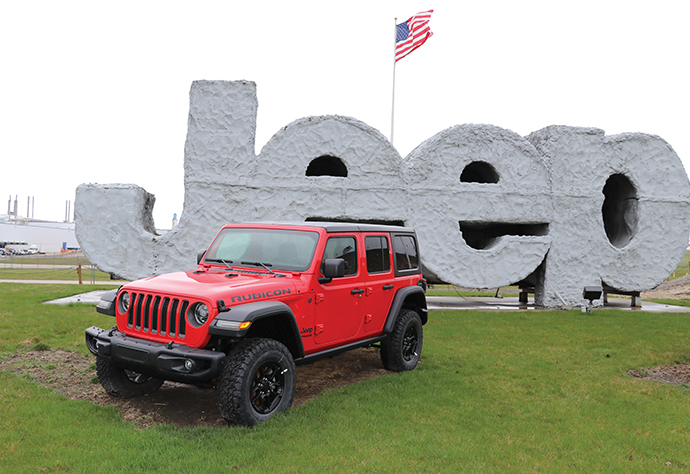 Ask anyone involved in the process: Making automobiles is a complex affair. And with the leap toward autonomous driving, it's becoming even more so. But solving problems is part of the fabric of the 17-county region of Northwest Ohio. For well over 100 years, the Toledo/Northwest Ohio region has served as a major location for research, innovation, development and production for the automobile industry.

"In the automotive industry, we're essentially a suburb of Detroit," says Gary Thompson, executive vice president of the Regional Growth Partnership, a privately-funded economic development group that covers those 17 counties, plus three in southeastern Michigan. "We have all that knowledge, the history, the legacy understanding. We have the infrastructure, direct investments, supply networks, and steel manufacturers. The public utilities are scaled up to facilitate automobile plants. The whole system works together."

The nexus of the region's automotive alley traces the Interstate-75 corridor from Toledo southward to Lima through Lucas, Wood, Hancock and Allen counties. In the past three years, according to RGP, the entire region has generated 49 successful automotive projects that produced 2,831 new jobs and $1.83 billion in new capital investment. All told, Northwest Ohio boasts 82 companies working in the automotive industry employing more than 45,000 workers.

“… the opportunity was here. The support from local and state was here. The incentives were here.”
— Jeff Joseph, Plant Manager, Treves

The showcase of the busy automotive cluster remains Fiat Chrysler's mammoth Toledo Assembly Complex, sections of which have operated as an auto plant going as far back as 1910. The 312-acre (126-hectare) plant employs some 6,000 workers. In 2016, FCA US announced it would invest $700 million in Toledo's North plant to build the next generation Jeep Wrangler. Production of the 2018 model began in December 2017.

Other anchors of the region's automotive industry include:

In addition to its major OEMs, Northwest Ohio has extensive Tier I, Tier II and Tier III automotive suppliers with broad expertise in tool and die, stamping, blanking, machining, and other automotive processes. Simply put, this is a region that knows how to make cars and the parts that go in them.

New blood is fostering dynamism. In December, Paris-based Treves announced plans to launch operations in Fostoria, at the meeting point of Hancock, Seneca and Wood counties. Treves specializes in the design of interiors and acoustic treatments.

Jeff Joseph, plant manager, says that Treves, with locations in Alabama and Mexico, turned to Northwest Ohio to bolster its North American presence.

"The company was looking for a site in the Midwest," Joseph tells Site Selection. "We were looking for opportunities with the major OEMs, and basically what we did was take the assembly locations around the area and drew circles around them, and they all kind of intersected in this Northwest Ohio area."

Fostoria, according to reports, beat out sites in Michigan to land Treves, which is moving into a 40,000-sq-ft. (3,716-sq.-m.) speculative facility built by the Fostoria Economic Development Corporation with the intent of luring a manufacturing operation.

"It's a great fit," says Joseph. "The state of Ohio worked with Treves on some tax abatements to help make this a great location. In terms of possible locations in other states, the opportunity was here. The support from local and state was here. The incentives were here.

In the last
3 years
in Northwest Ohio:

"As far as logistics goes, we're close to I-75 and close to the Ohio Turnpike. It's just a great situation in terms of shipping to the big assembly plants."

Joseph says the company's first contracts involve manufacturing interior carpeting for the new Ford Ranger and vinyl flooring for Ford's F-650 and F-750. Treves is investing an initial $15 million and has committed to hiring 91 workers over the next three years.

Autoliv-Nissin Brake Systems America is among the automotive concerns in Northwest Ohio that is building toward the future of autonomous driving.

Sweden-based Autoliv, one of the world's leading makers of airbags and passenger restraint systems, entered a joint venture in 2016 with Japan's Nissin Brake and announced plans in October to invest $60 million in a new plant in Hancock County, where Nissin has had a presence for a quarter-century. The plant is to produce electronically assisted "break-by-wire" systems seen as a crucial part of future vehicles that will rely on non-human input.

"It's a step in the direction of using sensing devices to actuate systems," says Wil Schroeder, general manager of Autoliv-Nissin Brake Systems America. Schroeder says the company has a contract for the system with a major OEM. The 216,000-sq.-ft. (20,067-sq.-m.) plant is expected to be completed in October.

"The workforce here is very strong," Schroeder tells Site Selection. "Secondly, you have proximity to the customers and various OEMs and to our suppliers. The proximity to those suppliers is good for keeping costs for equipment setup low."

In addition, says Schroeder, the state of Ohio offered incentives for infrastructure improvements around the new plant.

With the global autonomous driving market expected to grow up to $170 billion by 2030, Northwest Ohio is poised to be a player for years to come.

"We're making autonomous parts," says RGP's Thompson. "We're working every day on making cars lighter and stronger and safer and prepared for connected vehicles. I look at companies and suppliers in our region like Nissin Brake, and I look at what FCA is doing for the Jeep products," says Thompson, "and I realize that our region is preparing for the future of the automotive world."