Utah expands a diverse manufacturing base. 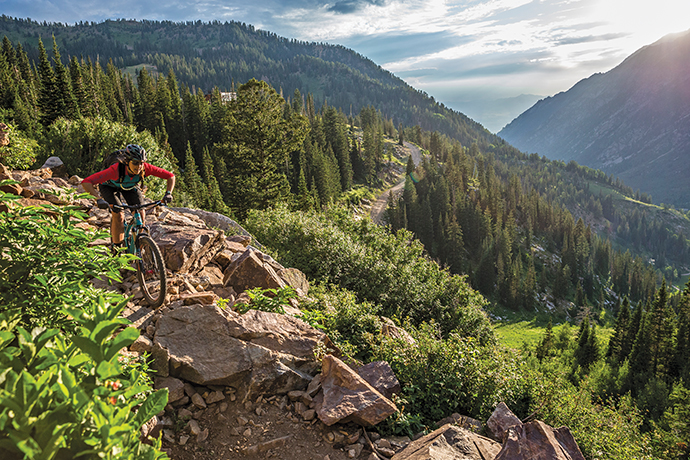 Enve Composites is uniquely Utah. Founded in Ogden in 2007, Enve manufactures bicycle rims for the serious cyclist. A set of Enve rims costs a cool $3,000, says Jake Pantone, Enve's director of marketing. "We're making a high-end product and we make no excuses for that. Our buyers keep coming back for more."

With its convenient location in a city that brands itself as a hub of outdoor recreation, Enve enjoys the luxury of being able to test its products on the challenging bike trails in the hills above its headquarters. The feisty outdoor enterprise has come a long way from its humble launch.

"At the beginning," says Pantone, "it was like any crazy little startup. We were crammed into some very small office space with three of us in one 12-by-12 office. We did a bunch of small things just to keep the lights on and fund the real development."

Enve rims are made not of aluminum, but of lighter-weight carbon. The trick, says Pantone, is to design and produce rims that are as light as possible without sacrificing strength.

"We're consistently refining the construction of the product until we hit a desired combination of ride quality," he says. "Carbon products are only as good as the molds they come out of, and we control the whole process from start to finish. We invest a lot of time and money in the molds we produce. We spend a lot of time and resources to really refine the ride quality of the product.

“Every company we work with says that outdoor recreation is a vital point of why they’re moving to Utah.”
— Tom Adams, Director, Utah Office of Outdoor Recreation

"We strive to be an authentic company," says Pantone. "We make the products that we want to ride because we are cyclists ourselves."

Other outdoor companies that have chosen to headquarter in Utah include Black Diamond, Skullcandy, Ground Zero, Easton and GPS. The outdoor economy has become such a boon to Utah that, in 2013, Governor Gary Herbert created a first-in-the-nation statewide Office of Outdoor Recreation.

"Our mission," says office director Tom Adams, "is to make sure that all Utahans can live an active lifestyle through outdoor recreation. People here tell their friends and family about Utah and tourism gets boosted. Then, before you know it, new businesses come to Utah. We've seen this happen time and time again. Every company we work with says that outdoor recreation is a vital point of why they're moving to Utah."

Adams notes that, with the boost from the highly successful 2002 Winter Games, entire Utah communities — including Ogden, Moab, and Park City — have shifted economic focus from minerals extraction to outdoor sports. The Wall Street Journal has named Ogden as "the center of outdoor sports gear" in the U.S. In addition to Enve Composites, outdoor companies that call Ogden home include Amer Sports, Mercury Wheels and Osprey Packs.

A State That Makes Things

There's a saying in Utah: "What Utah makes, makes Utah." This is a state whose official motto is the single word "Industry."

According to the National Association of Manufacturers, manufacturing makes up 12 percent of Utah's economic output, totaling $20 billion annually. Some 3,600 manufacturing companies employ more than 125,000 Utahans with an average annual compensation of more than $65,000 per worker.

"We're extremely diversified in manufacturing," says Todd Bingham, president of the Utah Manufacturers Association. "The supply chain for manufacturing is very well connected, and many of our manufacturing companies do business in multiple sectors. There's a very good mixture of high-tech manufacturing and then traditional manufacturing."

Notably, Utah has one of the highest concentrations of aerospace manufacturers in the country, including Boeing, Northrop Grumman, Raytheon, Rockwell Collins, Orbital ATK, Aerojet Rocketdyne and Lockheed Martin.

Northrop Grumman, which has enjoyed a presence in Utah since 1968, recently purchased Orbital ATK for a reported $22.75 billion. Orbital ATK makes launch vehicles and their propulsion systems, with rocket motors produced by Orbital ATK used in the Trident II D-5 and Minuteman III strategic missiles. Boeing is producing the back wings of its next-generation 787 Dreamliner in Utah and employs more than 750 workers in the state. The aerospace giant has facilities in Salt Lake City, Northport and West Jordan.

Utah also is a leading medical equipment manufacturer. Stryker, a global leader in medical technology, makes neurovascular products at its facility in Salt Lake City, where a $100-million expansion is under way that will allow the company to enter orthopedic, spinal and endoscopy product manufacturing. Stryker's investment is expected to create 540 new jobs.