The Federal State of Baden-Württemberg in southwestern Germany — the birthplace of the automobile — is ready to disrupt its own industry. 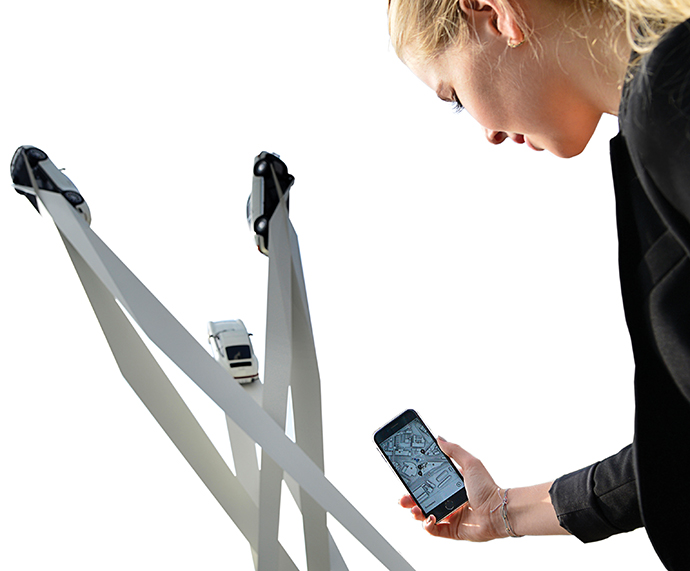 The sculpture “Inspiration 911,” created by the artist Gerry Judah, adorns the Porscheplatz corporate campus in Zuffenhausen in Greater Stuttgart, which one can now navigate using a new app — one small part of the e-mobility revolution. In recent years, Porsche has invested around €1 billion in facilities in Greater Stuttgart.
Photo courtesy of Porsche
by ADAM BRUNS

An already visionary German automotive sector in September took a further step into tomorrow at the inauguration of a €200-million, 300-job Test and Technology Center from Daimler located in Immendingen.

"Immendingen will play a key role in developing the mobility of the future," said Dieter Zetsche, chairman of the board of management of Daimler AG and head of Mercedes-Benz Cars, describing the work to be conducted in such areas as alternative drive systems, hybrids, electric vehicles (EVs) and autonomous driving.

Daimler and thousands of other companies couldn't have chosen a better territory for exploration — a unique entrepreneurial ecosystem committed to meaningful, transformative innovation. Baden-Württemberg finds itself at the forefront of redefining mobility, fully committed to autonomous and emission-free vehicles and leading a strategic dialogue on the future of the automotive industry that includes the personal participation of leading corporate CEOs and board members.

Baden-Württemberg is home to more than 1,000 suppliers and more than 440,000 automotive jobs.

"The automotive future and the future of the state Baden-Württemberg are profoundly linked," said Thomas Strobl, deputy prime minister of the federal state of Baden-Württemberg. "In our state the car was invented — that´s our motivation to lead the innovation. We want to develop Baden-Wuerttemberg into the most innovative mobility region of Europe."

That one place could embody such vision and foresight perhaps is no surprise, given that this is the state that gave birth to such luminaries as composer Friedrich von Schiller, writer Herman Hesse, philosophers Georg Friedrich Wilhelm Hegel and Martin Heidegger and artist Otto Dix. Nearly as far-ranging as their genius is the state's geography and topography, encompassing such wonders as the Black Forest, the headwaters of the Danube, Lake Constance and the edge of the Alps, the Rhine Valley and the fertile Neckarland region along the Neckar River.

The human firepower flowing across those landscapes is no less varied: People from 188 different countries populate a state gaining in its reputation for being international, cosmopolitan and tolerant, even as some territories seem headed in a different direction.

When it comes to corporate presence, the state's capital city of Stuttgart, with an urban area population of 2.7 million, is a fertile region, home to Daimler's global HQ as well as headquarters campuses of such companies as Bosch, Porsche, IBM and Hewlett-Packard. The clustering of high-performance global companies alongside centuries of middle-class, family-led mittelstand firms is no accident, and key to Baden-Württemberg's value proposition:

Yes, the cradle of the automobile is being rocked. But this state is ready to rock on.

"We are now about to cross the threshold toward a major disruptive change," wrote Winfried Kretschmann, prime minister of the State of Baden-Württemberg, earlier this year in laying out the crux of the strategic dialogue. "You might as well say that mobility is currently being re-invented, and this at a never-before-experienced pace."

The reinvention involves places as well as products: The new Daimler center in Immendingen has been built on the site of the former Oberfeldwebel-Schreiber Barracks, and is thus a prime example of the successful conversion of former military sites. "Due to the rapid approval phase, the short construction period and the open and transparent overall process, the Test and Technology Center is regarded as a model project for major construction projects in Germany," said Daimler.

German Chancellor Angela Merkel called the project no less than a model for successful structural change.

"As we open the Immendingen Test and Technology Center of Daimler today," she said in September, "we open a door to the future."

This Investment Profile has been produced under the auspices of Baden-Württemberg International, at the disposal of domestic and foreign companies, research institutes and universities as a central point of contact for all matters relating to internationalization. For more information, call +49(0)711 227 87-18 or visit www.bw-i.de.