How a much-maligned country plans to push back against fake news and a slowing economy.

You may recall the scuttlebutt created recently when the ICIJ (International Consortium of Investigative Journalists) published the results of a years-long investigation as "The Panama Papers: Exposing the Rogue Offshore Finance Industry."

Countless heads of state, celebrities and business leaders were outed, their secret stashes of wealth exposed. Voters across the world seethed with anger over corruption. And a tiny Latin American nation full of so much promise had its reputation irretrievably bruised.

Was this fake news?

While the facts detailed in the report were correct, and the politicians whose ill-gotten wealth was rightly exposed, it was wrong to suggest Panama was at the heart of this global scandal, or even disproportionately involved. What the investigation failed to adequately highlight was that this is a global problem, and even many Western nations serve as secretive tax havens for the wealthy and powerful. 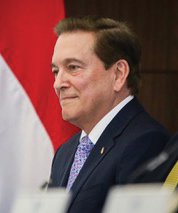 The Tax Justice Network (TJN) reported in September that four of the top 10 protectors of financial secrecy to the EU are members of the bloc themselves: the Netherlands (2nd), Luxembourg (3rd), Germany (6th) and France (8th). The U.S. was No. 1. (TJN's separate Financial Secrecy Index, which ranks jurisdictions according to their secrecy and the scale of their offshore financial activities, ranks Switzerland No. 1.)

Naming what was otherwise a brilliant bit of investigative journalism "The Panama Papers" unduly impacted a nation not deserving of the reputation with which it's now saddled, and damaged an economy still trying to recover. Site Selection magazine sat down with two of the leading candidates in Panama's presidential election to get their thoughts on this, and the other economic issues the next administration will have to tackle.

Site Selection: Many believe the so-called Panama Papers unfairly singled out Panama for a practice employed to a far greater extent in other countries across the globe – do you share that view? If so, why, and what will you do to combat the negative impact on Panama's reputation?

Laurentino Cortizo: The tax evasion problem is a global problem that involves many jurisdictions including European Union countries. Stigmatizing Panama and damaging its image is unfair and also far from reality. Only about 30 percent of these companies were registered in Panama — the rest were from other countries and most, if not all, of the bank accounts were from other jurisdictions.

Panama, contrary to many low tax jurisdictions, has a real economy, with more than 250,000 people working in the agricultural and industrial sectors, a Canal that is open to shipping of all nations. Statistics are clear; or instance, Panama only has a fraction of deposits from Europe. For example, in 2017 only close to 0.15% of total deposits of Panama's banking center were from France.

The best way to recover our reputation is by executing arduous bilateral and multilateral efforts with our partners and other members of the international community, educating them about all the changes and advances that we've enacted to ensure full transparency in order to dispel any inaccurate perspectives. And finally, as any sovereign nation should, we will apply any measures necessary to protect our economy from any force that tries to unfairly attack it.

LC: There are many factors that have contributed to the slowdown. First, it can be attributed to the completion of many large infrastructure projects, such as the Panama Canal expansion, which, of course, reduced employment. Secondly, Panama's Investment climate has suffered mostly from excessive red tape and bureaucracy. The country has also been affected by the regional slowdown, since most of our service exports markets are in these countries.

The way to turn it around will involve more efficient capital expenditures by the State and from direct foreign investment. The government must also modernize its judiciary and change many costly and obsolete regulations to make the country more competitive.

Additionally, the country has to create jobs, by supporting the private sector, facilitating entrepreneurship, boosting exports and domestic production for internal and external consumption.

LC: Panama's geographical position immediately provides a large competitive advantage. A commitment has been made to develop a logistics hub that positively impact the overall state of the economy with a number of key players working together: the Panama Canal, Tocumen Airport, Panama Canal Railway and all container ports. Panama's world class Container ports are highly efficient, and the Atlantic-Pacific port system handled 6.9 million containers in 2017, which is above the 6.7 million handled by New York that same year.

Further, the county has very low inflation and uses the dollar in an open economy where legal capital flows in a seamless manner. Panama's has a flexible legal framework for regional headquarters (SEM) which was created in the year 2007. Also, Panama has low political risk; all major political parties favor maintaining our successful economic model without major changes.

All supported by a sophisticated financial sector with complete attributes that are quite unique. The country takes pride in protecting foreign investment, which is vital to secure further growth.

LC: Social inequality is the greatest threat to the political, social and economic stability of our continent, and the malicious exploitation of this inequality can lead us down dark paths that we do not want to undertake. It is a challenge that we hope to begin to overcome in the next five years.

A full-blown trade war between China and the U.S. can have a negative impact on world GDP and on Panama's Canal and maritime sector.

LC: Proficiency in knowledge-based business services has made us leaders in the region. With the introduction of new technologies there is an opportunity to create the conditions to transform our financial center and compete with the larger markets. Our geographical position, expanded Canal and our first-world ports make our country should help Panama become a world-class logistics hub. We can also become an international center of regional knowledge in the long term that can serve as a base for the development of new technologies and research.

LC: Because we have an attractive, safe and secure legal regime that allows us to do business in a simpler and more convenient way for foreign companies. And thanks to our strategic geopolitical position, Panama is projected as the gateway to both North and South America, which makes us an ideal destination for foreign companies and multinationals. Additionally, Panama has the dollar and a well-developed open financial and service sectors, which are the best in the region.

LC: Our new relationship with China represents a can provide a wide range of opportunities in investment, commercial, cultural and intellectual issues. China is the second largest user of the Panama Canal, with 18% of total cargo. Likewise, it is the world's second largest economy, with the world's largest Population; an important actor in the international stage, which clearly should not be to be ignored.