Rhode Island can punch above its weight — and win — thanks to business location assets like the Quonset Business Park. It's not a new location — more than 200 companies already employ more than 12,000 people at the 3,200-acre park that was once the Quonset Point Naval Air Station. What's new is its escalating appeal to investors in some of Rhode Island's most strategic industries, including renewable energy and the defense, maritime, shipbuilding and composites sector. These are among the industries deemed strategic priorities for the state by the Brookings Institution for Gov. Gina Raimondo, who took office in 2015.

"That inter-related set of industries is extremely important within Rhode Island," says Stefan Pryor, Rhode Island's Secretary of Commerce. "From a historical perspective, they have been great contributors to our economy, and they continue to be front and center." The United States Navy has its Naval Undersea Warfare Center in Rhode Island, he notes. What's more, the U.S. Naval War College is based in Newport and General Dynamics Electric Boat already operates a major manufacturing facility — at Quonset Business Park. It's one of two companies to announce headline-making projects at the park in recent months. Deepwater Wind, a leading developer of offshore wind solutions, is the other. "We have a strong heritage in, and we fervently believe there to be an even stronger future in, these industries," says Pryor.

At Quonset Business Park, Electric Boat will invest nearly $800 million in a 1.3-million-sq.-ft. expansion for construction of submarines. The project will create more than 1,300 new jobs. It also operates a submarine manufacturing facility across the state line in Groton, Connecticut, adding buoyancy to the region's shipbuilding labor supply.

"Electric Boat needs to significantly increase its capacity at both the Groton location and its location in Quonset Point," says Liz Power, director of communications at the defense contractor. "The Quonset Point portion of this expansion represents an investment of nearly $800 million into our Rhode Island location. At Quonset, we will build a series of facilities that provide additional module fabrication and outfitting space to support construction of Virginia class and Columbia class submarines. These facilities will be constructed progressively over the next six to seven years, with the first two buildings already under construction," she explains.

"It's advantageous that the region has such a heavy concentration of marine and related activities," says Secretary Pryor. "Our defense companies include multiple nodes of activity within the larger region, and the investments are synergistic." They help expand the cluster beyond shipbuilding, he explains, with the support of state resources designed to foster startup and entrepreneurial activity in general.

"A lot of exciting and high potential work is bubbling up from our innovation-oriented smaller ventures," he relates. "For example, a company called Siren Marine makes and attaches sensor technology to all manner of ships and sailing vessels." The company, a recipient of a $50,000 Innovation Voucher Grant from the Rhode Island Commerce Corporation, is a pioneer in so-called Connected Boat technology. "I predict they will continue to grow and that we will see increased activity and job creation in Rhode Island." Sixty such innovation vouchers, which are intended for R&D conducted with state research institutions, have been awarded to companies to date.

The Onshore Site for Offshore Innovation

Meanwhile, Deepwater Wind is investing $250 million and will hire more than 800 to build a utility-scale offshore wind farm, the Block Island Wind Farm, that is projected to produce 400 MW of energy. Proximity to Interstate 95 and the Port of Davisville at the Quonset Business Park are critical logistics factor behind Deepwater Wind's operation at the park.

"It's only fitting that the Ocean State is home to America's first offshore wind farm," says Deepwater Wind CEO Jeffrey Grybowski. "One of the country's best offshore wind resources is located just off Rhode Island's coastline and has a long history in innovative marine trades. The state is home to great port facilities at Quonset Point and ProvPort that were each essential to the development of the Block Island Wind Farm and are well-positioned to support future offshore wind development.

"Rhode Island staked out an early leadership position and has been a model for other states up and down the East Coast for the right way to develop offshore wind energy," says Grybowski. "From workforce training to the first-of-its-kind Ocean Special Area Management Plan that guides the siting of offshore wind, Rhode Island has set a high bar for responsible offshore wind development. We're proud to be headquartered in Rhode Island and to be partnering with the state of Rhode Island on a new, larger offshore wind farm that will keep Rhode Island ports and workers busy for years to come."

The significance of the Port of Davisville to park tenants specifically and the region in general cannot be overstated, says Steven King, P.E., managing director of Quonset Development Corporation. "The Port celebrated a record-breaking month for auto imports this past August, importing 35,000 cars," he relates. "It has seen 547 percent overall growth in auto imports over the last 20 years. These stats indicate that despite our smaller size relative to other East Coast ports, we handle the needs of our larger tenants."

The Port of Davisville recently received over $850,000 through a Maritime Administration grant to increase barge services. The grant will help position the port as a stop on a new marine highway, joining the ports of Brooklyn, New York, and Newark, New Jersey. "This grant will enable the port to remove traffic from I-95 to the Business Park and offer further transportation service to these larger ports," King elaborates. "The efficiency that we can offer our clients in shipping directly from the Port of Davisville or to other ports in the region sets us apart from other business parks in the region."

This Investment Profile was prepared under the auspices of Rhode Island Commerce Corporation (RICC). For more information, call 401-278-9100 or visit https://commerceri.com.


Quonset Business Park at a Glance 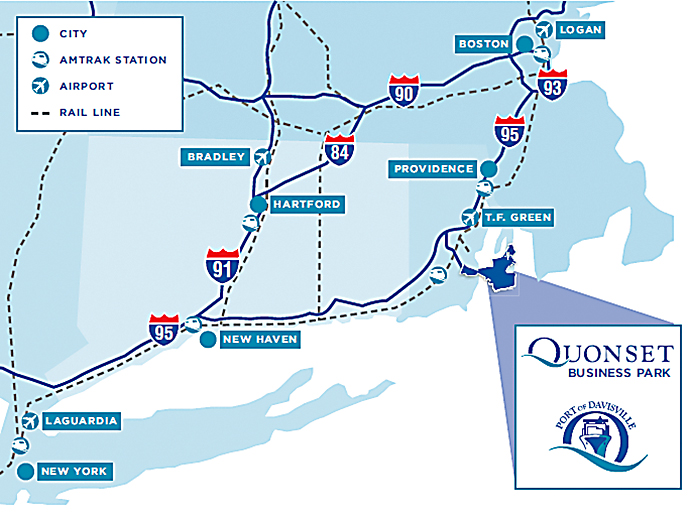