When the Economy Is Sick, Look to Healthcare for the Cure 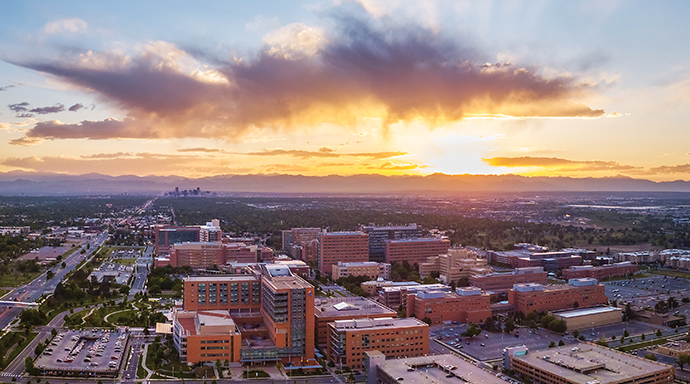 The University of Colorado Anschutz Medical Campus in Aurora is one of many campuses well positioned for growth in health services jobs.
Photo courtesy of CU Anschutz
by ADAM BRUNS

Just as the lines of value have been blurred between the traditional debt-ridden four-year college degree vs. community college and associate's degrees, technology has blurred the lines among sectors, jobs and gigs, and redrawn the map when it comes to weathering an economic downturn.

A June 2018 report by three economists affiliated with the U.S. Bureau of Labor Statistics offers healthcare sector insights from the Great Recession of December 2007 to June 2009. Among the questions it asks: "Did employment in healthcare mirror that of the overall economy, or was healthcare recession-proof?"

Here's the answer right up front: The Great Recession "had little negative effect on job growth in healthcare compared with its effect on the national economy," the authors conclude. "For the most part, this was true regardless of occupational setting or geographic location."

At its peak, the Great Recession caused U.S. unemployment to reach 10 percent in October 2009, and caused 40 percent of American households to experience "some sort of distress, as measured by unemployment, negative home equity, arrears in mortgage payments, home foreclosures, or substantial losses in retirement savings."

But healthcare kept sailing. Here's an excerpt from the report:

In contrast to the uneven national job picture, job growth in the healthcare industries was steady, averaging more than 270,000 new jobs each year over the 13-year period. This steady increase in healthcare employment, coupled with the marked fluctuation in national employment, points out the importance of the healthcare industries to the national economy. In 2001, healthcare jobs represented 10.2 percent of the national job base. By 2014, the share had increased to 12.7 percent, or one out of every eight jobs in the nation. During the Great Recession, healthcare employment expanded, increasing by 852,000 jobs, or 6.6 percent.

Concentrating on employment presents only a partial picture. We must also consider the impact of the recession on overall wages. During the 2001–14 period, average wages in both the healthcare industries and the national economy increased.

Info for the Information Economy

Could healthcare continue to stay strong if another downturn is around the corner? BLS projections from October 2017 examine expected changes in the U.S. economy over 2016-2026, covering demographics, GDP, productivity and occupations. Among the highlights:

Healthcare and related occupations account for 16 of the 30 fastest growing occupations from 2016 to 2026. Other occupations in the top 30 are generally energy-related occupations or employed in computer and information industries. In addition to mining, energy jobs on the upswing will include oil and gas jobs such as roustabouts, service unit operators, rotary drill operators, and derrick operators. 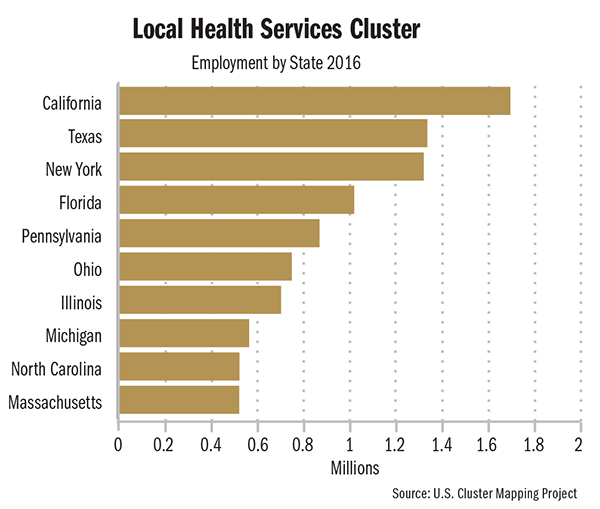 Indeed, by 2026, says the BLS, the service-providing industry sectors are projected to account for more than 81 percent of all wage and salary jobs in the economy and for most of the job growth. The health care and social assistance sector will account for more than one-third of the jobs added over the projections decade, and also have the fastest growth in real output, increasing at 3.1 percent annually. The two groups expected to drop are production occupations (-4.3 percent) and farming, fishing, and forestry occupations (-0.3 percent). Manufacturing industries are projected to lose about 110,300 jobs, while office and administrative jobs will decline by 256,700 positions. 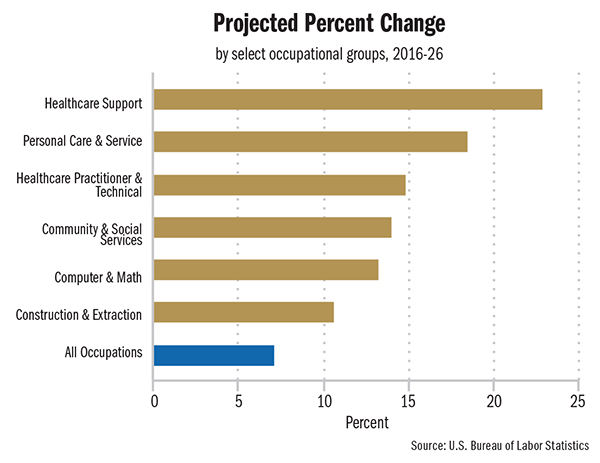 But the same sector is expected to have "rapidly declining" wage and salary employment due to new technology increasing productivity. The same can be said for the postal service and several manufacturing sectors such as textiles and apparel.

However, one projection may already need revision, as the BLS attributes the coming manufacturing fall-off to factors that include "automation and outsourcing to overseas production for cheaper labor." Though the global search for cheaper but still effective labor is perennial, the tax cuts of early 2018, among other things, have driven both profits and some previously offshored functions back to the U.S.

Whether they come back or not, healthcare and social assistance will be there to catch us, as hospitals and the offices of physicians and other health practitioners will be among the leaders in real output. "The aging of the population and an expected rise in chronic conditions, such as diabetes, will lead to higher demand of all types of healthcare services," said the BLS.