Driven by Demand, Demographics, Development (3Ds) - the world’s largest democracy is set to emerge as a global business and investment destination as it turns 75 by 2022. 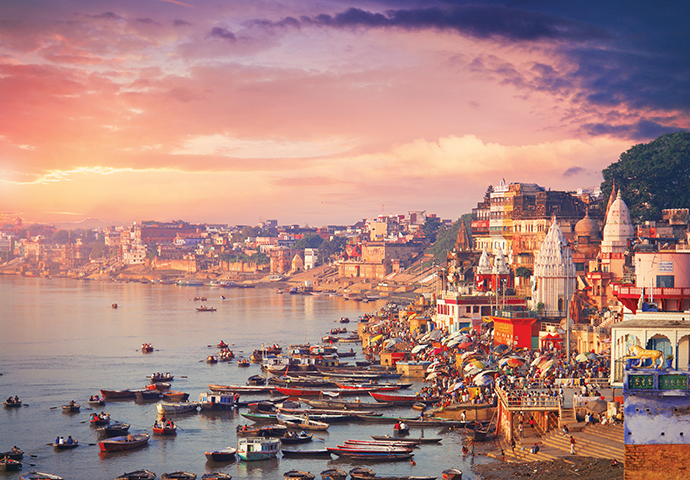 Forty thousand visitors, a massive sale, jam-packed roads, additional police deployment to manage the crowd — all marked the launch of Ikea's first store in India in August 2018, affirming the company's decision to invest there. Ikea has announced further investment of US$400 million in the next three years to open three fulfillment centers across India.

In 2017, Apple started the production of the iPhone SE in India, and in 2018, the company is adding the iPhone 6s, with the "Made in India" badge on it.

With India estimated to reach $100 billion in foreign direct investment (FDI) inflow per annum by 2022, the country is scaling greater heights in an FDI journey that began in 1686, when the East India Company refused to pay a 3-percent customs duty. That led to a war and the creation of an empire, and marked the beginning of FDI in India. Fast forward to the present (easy to do via the printed word, harder in real life): India received $40 billion in FDI in 2017 after welcoming $44 billion in 2016. According to the UNCTAD Investment Trends Monitor (2018), India was the 10th largest recipient of global FDI in 2017 and remained among the top three destinations for greenfield capital investment, along with the U.S. and China.

Globalizing with Growth and Investments

In the past decade, India has emerged as the fastest-growing large economy in the world. In July 2018, India became the world's sixth-largest economy. India has doubled its GDP to $2.5 trillion within a decade, and is expected to progress as a key economic engine in Asia, just as China shows signs of slowing. Manufacturing and consumer spending are proving to be the main catalysts in driving the Indian economy. India has become the third largest economy in terms of GDP based on purchasing power parity (PPP).

According to the IMF, India is projected to generate GDP growth of 7.3 percent this year and 7.8 percent in 2019, boosted by household spending and business and tax reforms. The services sector has been driving economic growth in India, accounting for 61.5 percent of Gross Value Added (GVA) growth, followed by the manufacturing industry (23.1 percent) and agriculture (15.4 percent). The services sector also attracts the highest overall inbound foreign investments (over 64 percent of all FDI) through its IT, banking and communications, and contributes significantly to the country's earnings from export. This is followed by the manufacturing sector attracting 30 percent, and energy (including petroleum and natural gas) receiving 4 percent of cumulative FDI inflows into India.

India's rising affluence is increasing domestic demand and consumption. India's consumer story is led by its 129 million urban mass consumers, estimated to grow by four times by 2025. Boston Consulting Group predicts India to be the world's third largest consumer economy by 2025, owing to a shift in consumer behavior and expenditure patterns. The country's favorable demographic dividend is another plus for India. By 2020, it is projected to be the youngest country in the world with the median age of 29 years, and by 2025 to account for 20 percent of the world's working-age population.

To cater to the rising demand, and leveraging the young workforce, India's government is focused on growing the country's manufacturing sector, aiming to bring the segment's current contribution to GDP from 19-20 percent to an ambitious 25 percent. The Indian government's main initiatives to achieve this goal are "Make in India" and "Skill India." While the former aims to make India a global manufacturing hub and create employment opportunities for its unemployed and under-employed population, the latter focuses on training the unskilled labor force and enhancing employability. To support the expanding manufacturing clusters across India, infrastructure development is among the highest priorities for both the Indian government and industry.

By 2050, over 350 million Indians are projected to migrate to the cities, creating significant pressure on urban centers' resources. To grow the manufacturing ecosystem while integrating the migrating population, by 2040 it is estimated that India will require $4.5 trillion of investment capital for infrastructure development including power, transportation and urban development. The Indian Government has already pledged to invest over $1.5 trillion in infrastructure development projects across highways, railways, ports, airports, and industrial corridors by 2022. The centerpiece of this ambitious development is the Bharatmala project. The scope of the project is massive, and includes: 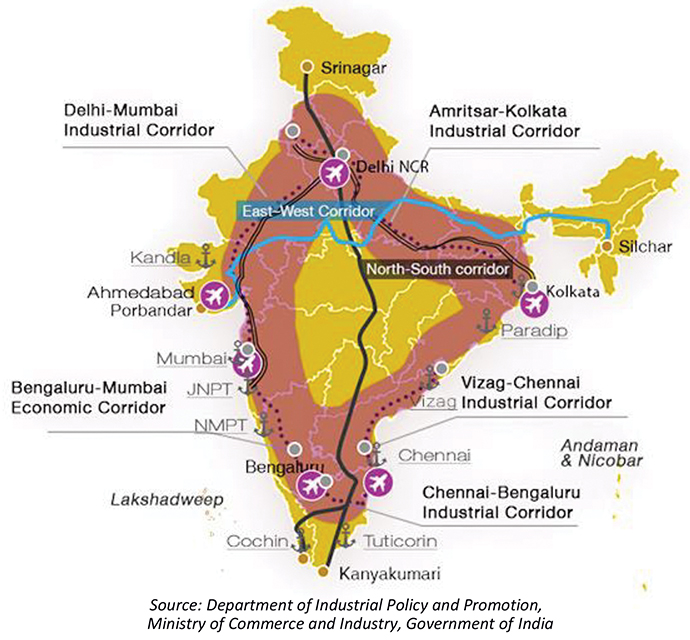 India and China are on their way to being the largest manufacturing hubs of the world by 2030. This will, in turn, shift the focus of global maritime trade from the Pacific to the Indian Ocean. Recognizing such potential, in 2015 the Indian Government announced the Sagarmala project, which consists of setting up new ports, modernizing existing ports, expanding connectivity among ports and road, rail, multimodal logistics parks, pipelines and waterways. As a central focus of India's infrastructure growth story, this mega-project is being seen as the counter-offer to China's Belt and Road Initiative (BRI), creating alternate trade linkages involving India within the Asia-Pacific region.

The pillars of '3Ds' — Demand, Demographics and Development — coupled with strong economic performance, and the sheer size of the Indian market, are proving to be a big attraction for global investors to invest in India, while also encouraging Indian companies to expand internationally to access new products, technologies and customers. Granting permission to foreign firms to invest in almost all the domestic sectors, and simultaneously increasing the threshold of outbound investments, are key growth drivers to both outbound FDI and inbound FDI into India. 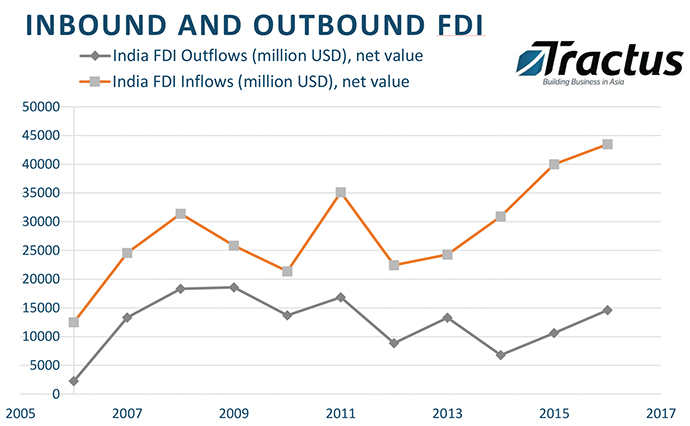 There is a strong degree of correlation between the inbound and outbound Indian FDI. With the capital investment inflow into India, the trend of outbound acquisitions has also gained momentum for Indian businesses to develop new markets, capacities, and clientele. In addition, the availability of global financing is facilitating expansion for Indian companies. Amidst the uncertainties in major trade blocs including North America, European Union, and China, Indian companies are seizing opportunities and maximizing their presence in world markets, thus increasing the projected outbound FDI figures in 2018-19 by $2 billion to $4 billion.

The future prospects for the Indian economy also look promising, with government leadership demonstrating its commitment to put the economy back on a high-growth path by attracting more private investment and accelerating the GDP growth rate. In this effort, the government of India (GoI) has been working on several initiatives such as easing infrastructure bottlenecks; pursuing business-friendly policies; boosting foreign investment; promoting manufacturing activity; and simplifying tax laws. Consequently, investor sentiment has seen a substantial uptick during the last few months.

To facilitate investment flow, the government has introduced structural reforms, and continued to develop favorable trade terms with developed markets such as North America, Europe and Australia. The "Make in India" initiative is successfully attracting global companies to invest and set up in India, increasing FDI inflows by 37 percent since its inception.

The abolition of the Foreign Investment Promotion Board — a former government agency responsible for reviewing all potential foreign investment — and the liberalization of foreign investment thresholds for the retail, aviation and biomedical industries are proving to be major catalysts in growing FDI inflow into the country. The newly introduced FDI reforms apply to over 90 percent of the FDI approvals under the automatic approval route, making for an investor-friendly business ecosystem.

Although it caused temporary disruptions for the domestic economy, the demonetization in 2016, coupled with the introduction of a streamlined tax structure — Harmonized Goods & Services Tax (GST) in 2017 — has showcased the Indian government's commitment to root out corruption while moving to improve the ease of doing business to the international business community, thus resulting in increased investment activities in 2018.

When it marks 75 years of independence in 2022, India is projected to be the fourth largest economy in the world. India's GDP is expected to reach $6 trillion by FY 2027 and achieve upper-middle income status on the back of digitization, globalization, favorable demographics and reforms. Infrastructure development and capital markets investments will be the key drivers to sustain growth projections. Since the global financial crisis, Indian banks and capital markets have evolved with stricter regulations and increased operational requirements. Many of the delinquent Indian borrowers are now subject to the Insolvency and Bankruptcy Code (IBC), which in turn has enhanced the confidence of global investors.

However, external market factors do pose a challenge for the Indian economy to sustain its momentum. Strong import demand, higher oil prices and exchange rate depreciation (12 percent between January and September 2018), are becoming less favorable for India, and increasing its trade deficit and Current Account Deficit (CAD) — the latter going from 1.9 percent in FY2017-18 to an estimated 2.6 percent in FY2018-19. As monetary policies in the United States have started "normalizing," developing economies like India are feeling the pressure of capital outflows, which, along with stricter global financing conditions, will likely test India's capability for FDI attraction.

That said, under Prime Minister Modi's leadership, India appears to be up to the challenge, and has demonstrated an ability to navigate through many obstacles. As long as the "3Ds" remain intact, India's future looks bright.

Based in New Delhi, Madhur Aggarwal is a managing consultant for Tractus Asia, a strategy and market entry consulting leader in Asia. For more, visit www.tractus-asia.com.