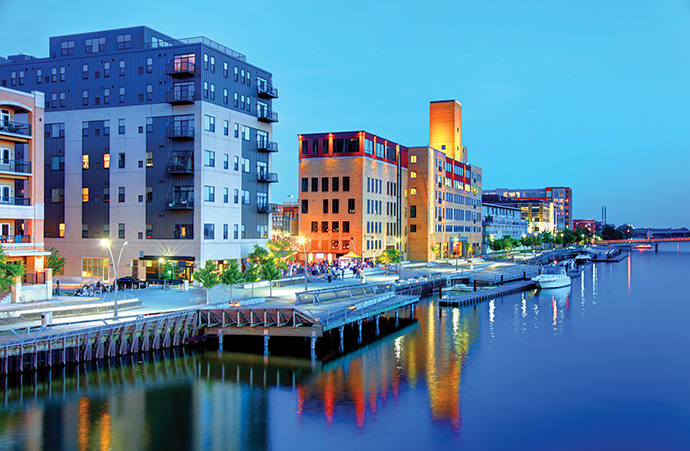 Green Bay Packaging has broken ground on its new paper mill in Green Bay, a $500 million project expected to create at least 200 jobs statewide. The new mill will replace the company's existing recycled paper mill, which was built in 1947 and has been rebuilt three times since then. It will cost $475 million and it will take three years to build. The company also is investing $25 million to expand its shipping container division as part of the project.

This will be one of the largest economic development projects in state history (though not in the Foxconn mega-project's league) and the largest ever in Brown County. In Brown County alone, this new investment will preserve 1,100 jobs. Green Bay Packaging is partnering with local companies for the design, construction, and installation of equipment into their new facility. The mill is expected to be fully operational in the spring of 2021.

The Wisconsin Economic Development Corporation (WEDC) has awarded the company with up to $60 million in state income tax credits over 12 years to ensure that the new mill is built in Wisconsin. The actual amount of tax credits the company receives is contingent upon the number of jobs created and retained, and the amount of capital investment the company makes through 2029. As is the case for all WEDC tax credit awards, Green Bay Packaging must first create the jobs and make the capital investments before receiving any credits.

"We have received overwhelming support and encouragement to restart this mill — support and encouragement from the owners, community, customers, suppliers, government officials, contractors, and most importantly, our employees," said Kyle Putzstuck, president of Midwest Paper Group. "The additional support from the state of Wisconsin being announced today is further affirmation that we are on the right path and represents a significant investment in continuing the 129-year old papermaking tradition in Combined Locks."

In addition to reopening the mill, Midwest Paper Group is spending millions to convert the facility from one that produces printing and writing grades of paper (white paper) to one that produces packaging grades (generally brown paper). The project entails installation of equipment needed to convert waste paper to medium and linerboard used in corrugated and other packaging. Midwest Paper Group will produce both grade lines initially, but it plans to increase production of its packaging grades of paper. The company says there is growing demand for packaging papers because of online shopping and shipping, and the mill's conversion will help meet that demand and keep the paper manufacturing in Combined Locks.

Foxconn’s investment in the Badger State continues. A few months after its $10 billion LCD manufacturing facility announcement, leaders from Advocate Aurora Health, Foxconn, Johnson Controls and Northwestern Mutual formed a new $100 million venture capital fund to target innovations in health care, technology, manufacturing and financial services. The Wisconn Valley Venture Fund, announced in late August, will create innovation and strategic business development throughout Wisconsin, with each organization contributing $25 million to the fund. The announcement came shortly after Foxconn announced a $100-million gift to the University of Wisconsin – Madison to establish a research partnership.

Foxconn’s investment in Wisconsin acted as a catalyst for these four companies to come together to create the fund, which will be used to invest in early-stage companies who will create innovate solutions and ideas within health care, technology, manufacturing and financial services. In addition, this fund will be a launch pad for attracting and retaining businesses and top talent in Wisconsin while simultaneously helping Wisconsin become a new global hub for technology.

Each of the four companies will have representation on the fund’s investment committee. The committee will be charged with selecting a fund manager who will lead the day-to-day investments for the fund. Further details about the fund are expected after the manager of the fund has been selected.