These jurisdictions top the charts in a nation already leading the way in infrastructure, sustainability and global commerce. 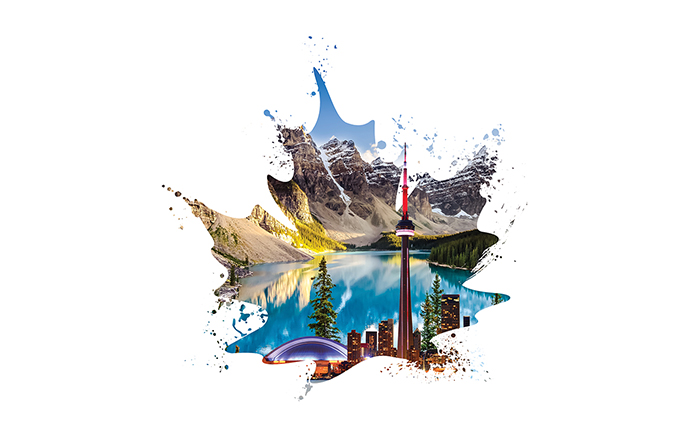 Mark Rose, CEO of global commercial real estate services firm Avison Young, likes to talk about his company's collaborative and talent-driven culture, and how shifting from a top-down hierarchy to a model with the client in the center of a circle of resources, innovation and investment is one key to the growing global firm's success. But he could just as easily be talking about Canada.

"We are in a period of sustainable stability and growth," he says of Avison Young's birthplace. "That comes from a country that has behaved extremely well. Looking back, the banking system avoiding in 2008 the troubles that hit everyone else has been a foundational pillar for Canada's strength. What's not talked about? The communication that comes out of Washington, D.C., has impacted universities, and impacted the objectives of investors around the world." That's because a "disproportionate" slice of top global talent that previously would have looked to the U.S. for higher education are applying to top schools in Canada instead "and Canada is benefiting from that." 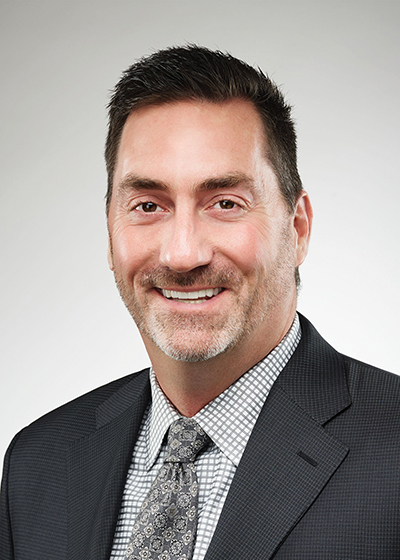 Other things are aligning well too. Greater Vancouver and Toronto in particular are benefiting from migration to their downtowns, stable and friendly business environments and transit improvements, says Rose.

"Ride the UP Express train in Toronto," Rose says of the rail service between downtown and Toronto Pearson International Airport. "I'll never get into a taxi or an Uber. The train is comfortable and less expensive. I'm a CEO and chairman, but I don't need a driver and a car. I love that train."

So might Amazon, which still counts Toronto among its candidates for its HQ2 project.

"It would be an unbelievable project," Rose says of HQ2. Either way, Canada is clearing its own path. "Canada is open for business, not reckless," he says. "Is Canada going to continue to be the recipient of global business growth? Absolutely."

"Intense competition for office space continues to bolster office market fundamentals across Canada — especially in downtown markets," said Bill Argeropoulos, principal and practice leader, research (Canada) for Avison Young, on the August release of the firm's mid-year 2018 North America and Europe Office Market Report. "Demand from traditional sectors is being augmented by the proliferation of domestic and global technology and co-working firms, ongoing urbanization and a burgeoning millennial workforce — all part of Canada's emerging innovation economy."

"We are in a sweet spot," Rose says. GDP and employment growth and low interest rates have resulted, "and it's just setting up very well whether you're in major, secondary or tertiary markets."

Many of those markets appear in this year's Canada's Best Locations, where we salute the top provinces and top metro regions for their private-sector facility investment and job creation performance, considered on a cumulative and per-capita basis based on qualified project data from Conway Analytics' Conway Projects Database.

Unless otherwise noted, all dollar figures are in Canadian dollars. At press time, C$1 = US$0.77

"We are pleased to commence development of the North and final tower at Bay Adelaide Centre with highly respected financial institution, Scotiabank, as the lead tenant."
— Jan Sucharda, Global President and COO, Office Division, Brookfield Property Partners, August 2018, on the final phase of the 3-million-sq.-ft. center in downtown Toronto

Programs & Initiatives: The ministry and its investment office continue to champion programs such as the Red Tape Challenge, which is fielding input from seven sectors (including automotive, chemicals, financial services and tourism) on removing unnecessary regulations. As of 2017, the province's burden reduction initiatives have reduced business costs by $152 million since 2011.

Did You Know? In addition to registering the lowest downtown vacancy in North America (2.2 percent) at mid-year 2018, Toronto had the most overall (8.5 msf) and downtown (7.2 msf) office space under construction in Canada.

"In France, when you try to grow your customer base, companies' doors are often closed to you. Here in Québec, customers are more open."
— Frédéric Picard, President of Picard Technologies, April 2018

Programs & Initiatives: From 2016 to 2018, Invest Québec invested $1 billion in funding in partnership with the Government of Quebec to support manufacturing companies that have created investment projects worth $3.9 billion.

Did You Know? Census numbers show that close to 54.4 percent of Montreal's population speaks English and French and the metropolitan area is now Canada's most trilingual city, with 21 percent of the population speaking at least three languages.

"Together with business leaders, we are building on our strengths in energy, petrochemicals, agri-business, forestry, life sciences and tourism, creating a stronger, more diversified Alberta."
— Rachel Notley, Premier of Alberta, July 2018

Programs & Initiatives: About $99 million in credits from the first three rounds of the province's Capital Investment Tax Credit are expected to support more than 3,000 jobs, with companies investing more than $2 billion in their facilities. (The fourth intake window will open in January 2019.)

Programs & Initiatives: In 2017 the organization brought Startup Calgary under its umbrella, and also welcomed a $100-million commitment from the city to the Opportunity Calgary Investment Fund. Calgary Rising is a new program inviting capital partners to invest in Calgary infrastructure projects.

Did you know? Calgary was just named by The Economist Intelligence Unit as the most liveable city in North America, and fourth globally.

"Coupled with CN's order for 350 centrebeam lumber cars, this additional 1,000 grain car purchase will result in the hiring of more than 550 additional people at our Hamilton facility, which currently employs over 1,500."
— Gregory J. Aziz, Chairman and CEO, National Steel Car, May 2018

"In addition to extensive infrastructure improvements and the development of Dundas Place, there are currently 10 high-rise projects in various stages of completion which, once finalized, will create more than 3,000 new units in the downtown core."
— Charlie Gobert, Executive Vice President, Avison Young, Waterloo region

Programs & Initiatives: Between 2001 and 2017, the city sold approximately 619 acres of industrial land. London's newcomer strategy is a program to welcome and integrate immigrants into the fabric of the city.

Did You Know? In April, Western University in London, with enrollment of 30,000, opened its $47-million Western Interdisciplinary Research Building (WIRB).

"Mississauga is Canada's sixth-largest city and is arguably the core industrial market for all of Canada, with more than 188 million square feet (22 percent of the Greater Toronto Area's 815 million sq. ft.) of established inventory."
— Martin Dockrill, Avison Young Principal and Managing Director, Ontario

Programs & Initiatives: Mayor Bonnie Crombie and EDO leaders went on a trade mission to Japan in 2017 — Mississauga, with 100 Japanese companies, accounts for over a half of Japanese companies in Ontario. In 2017, a new life sciences cluster strategy was approved by city council.

Did You Know? Served by seven major highways and with Toronto Pearson International Airport at its doorstep, Mississauga is home to 60 Fortune 500 company headquarters offices.

Programs & Initiatives: The federal and provincial governments will each allocate $1.3 billion toward the new $6.3-billion Réseau Express Métropolitain (REM) rail transit network, scheduled to start operations in 2024 and connect the south and west boundaries of the Greater Montreal Area to the rest of the city's transit system. From the same entities, Montreal is expected to receive close to $200 million over the next five years for a new innovation campus.

Did you know? Hubert Bolduc, President and CEO of Montreal also serves as interim chair of the Consider Canada Alliance, a 13-region coalition of investment promotion agencies representing 59.6 percent of Canada's population, 65.1 percent of its GDP and 83.4 percent of Canada's GDP growth in the five years ending in 2017.

"Venture13 is one of the most exciting projects ever undertaken in Eastern Ontario, and I firmly believe it will be the crown jewel in any ongoing innovation strategy for the region."
— MP Kim Rudd, Northumberland-Peterborough South, May 2018, at the opening of Venture13 (V13), a new innovation, tech startup and entrepreneurship center in Cobourg

Programs & Initiatives: Based in the university town of Kingston but with over 140 members, the Ontario East Economic Development Commission represents more than 200 communities. Its key sectors are advanced manufacturing and materials technologies, logistics, food processing, rural innovation and investment tourism.

Did You Know? KPMG has calculated operating costs in Toronto to be 12.3 percent higher than communities in Eastern Ontario.

"The Foreign Trade Zone point will support the development priorities of the Port of Québec, Jean-Lesage International Airport and the new regional industrial port zone, thus strengthening Québec City's position as the European gateway to trade in North America."
— Québec City Mayor Régis Labeaume, August 2017, on the city's designation as the first foreign trade zone point in the province

Programs & Initiatives: A federally backed artificial intelligence supercluster will include the SCALE.AI project in Quebec City. Meanwhile, "we are aware that labor shortages are the primary concern for the coming year," said Carl Viel in January. "With that in mind, Québec International will redouble its efforts this year and increase the number of initiatives to attract the workers we need to the area."

Did You Know? A January 2018 survey of 175 company leaders in the metro area found that 79 percent of respondents plan to invest in their companies in 2018, the highest level since 2012.

"Sarnia-Lambton represented a tempting choice for the ownership of NOVA because of its proximity to three existing NOVA Chemicals manufacturing sites, existing pipelines and transportation infrastructure, however, we believe the local leadership with NOVA and our community earned this opportunity."
— Bruce Hein, Chair, Sarnia-Lambton Economic Partnership, December 2017, on NOVA Chemicals' decision to construct a $2.2 billion world-scale polyethylene plant

Programs & Initiatives: The Sarnia Lambton Industrial Alliance (SLIA) is a coalition of over 30 Sarnia-Lambton companies in manufacturing services. Local leaders continue to push for development of an oversized load corridor that will involve upgrading roads and Sarnia Harbor.

Did You Know? In addition to the Blue Water Bridge (Ontario's second-busiest international crossing for commercial trucks), CN Rail's international tunnel connects Sarnia-Lambton to Michigan under the St. Clair River.

Programs & Initiatives: The VEC says one in 15 Vancouver residents already works in the green economy, but in March, the region announced the the beginning of a year-long collaboration with economic theorist Jeremy Rifkin's team in order "to transition Greater Vancouver into a smarter, greener and connected region and economy."

"The Winnipeg Whiteout Street Parties confirmed Winnipeg's reputation as a modern, energetic and cosmopolitan city. We are world-class, and we have the passion to match it."
— Dayna Spiring, President & CEO, Economic Development Winnipeg, on the parties during the Winnipeg Jets' playoff run that saw more than 120,000 people gather downtown

Programs & Initiatives: Since its inception in 2011, the YES! Winnipeg program's results have included investment in the initiative from 100 local companies; 82 firms successfully created, relocated or expanded; 4,801 jobs created; and more than $577 million invested at maturity.

Did You Know? "We are Canada's best kept secret," says Wes Schollenberg, Avison Young's managing director, Winnipeg, noting the area's affordability. In 2017, the average market cost was $330,000 for a two-story detached house, and $250,000 for a two-bedroom condo. 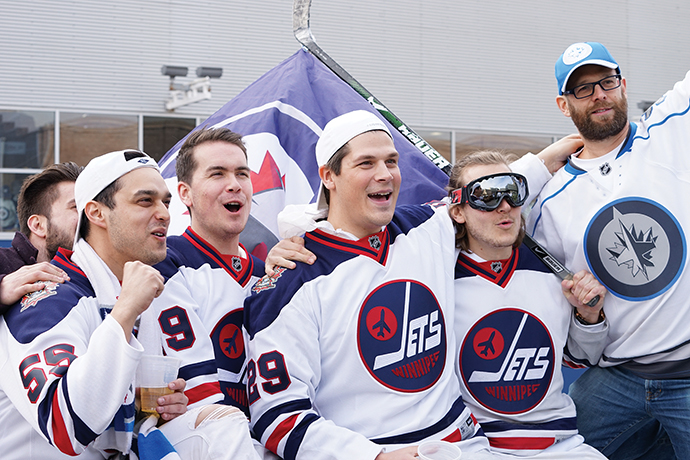 The whiteout parties during the Winnipeg Jets’ 2018 NHL playoffs drew more than 120,000 to downtown streets.
Photo courtesy of EDW