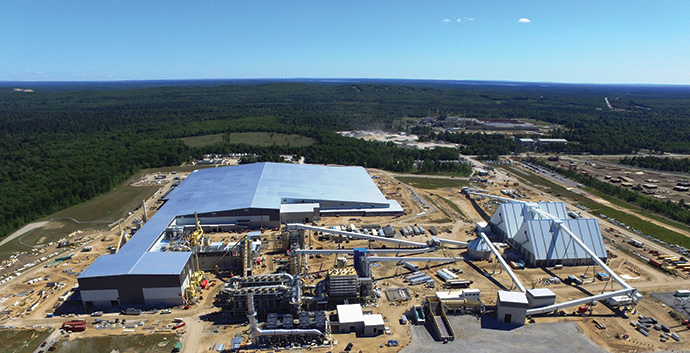 Arauco is building a $450-million particleboard millin Grayling, Michigan. Assistance from Consumers Energy paved the way for the project, which will be the largest of its kind in the world.
Photo courtesy of Arauco North America
by GARY DAUGHTERS

Grayling, Michigan, boasts the nation's largest National Guard training site, which makes it a military town. With its rivers, lakes and four-season climate, it's a tourist town. Its abundant forests and local operations by Weyerhaeuser and Georgia Pacific also make it a wood products town.

"We're in the middle of the woods, and the industry's grown from there," says Rick Harland, supervisor of Grayling Charter Township, population 7,000.

Noting the town's remote northern location, Harland observes that, "We've always kind of just existed. We're hoping that all these new jobs will help our local businesses to not just sustain but to actually flourish, as well."

The new jobs are coming courtesy of Chile-based Arauco, one of the world's top makers of particleboard for the furniture industry. Arauco is making a $450 million investment in Grayling in the form of a high-tech manufacturing plant that's to go on line in the fourth quarter of this year. Arauco will employ at least 210 people, immediately making it Grayling's third largest employer.

"It's a really big deal for Grayling," says Harland.

How the deal came together is a testament to teamwork, diligence and Michigan's commitment to economic growth through the Michigan Economic Development Corporation and the state's premier utility, Consumers Energy.

"Consumers was there from the beginning," says Jake Elston, vice president of operations for Arauco North America, of the 18-month site selection process that saw Michigan chosen over South Carolina, northern California, Oregon and other parts of the Upper Midwest.

"Power supply was critical," says Elston. "It's critical to any industrial manufacturing operation. We had to be competitive with the other regions as we looked to Grayling. Consumers Energy did a great job in making some adjustments and understanding how large consumers such as us fit into the mix. It was certainly a critical element in picking Michigan."

Jeff Mayes has worked on a number of such projects as Consumers Energy's director of economic development. "Our team's goal," says Mayes, "is to attract new investment to Michigan. We have dedicated ourselves to retaining and supporting existing customers and gaining new ones."

There were several obstacles that needed to be overcome. One of the states competing for the Arauco plant offered subsidized electric rates, signaling that Michigan's rate would have to be highly competitive. In addition, high-power electric lines would have to be run some two miles to the site in Grayling, a potentially costly and time-consuming endeavor. Over the course of many months, the Consumers Energy team listened to Arauco's needs and overcame each hurdle.

"In addition to energy," says Mayes, "they have other utility needs — water and sewer — but they also have talent needs, they have logistics needs, so working together to make sure energy fits all those other important business needs is something we worked very hard on."

“Consumers was responsive and kept to their proposed timelines. The importance of this happening as planned can’t be overemphasized with a construction project of this magnitude.”
—Jake Elston, VP of Operations, Arauco North America

In the end, Consumers not only offered a competitive electric rate, but also demonstrated the likelihood of lower energy costs in the future. The proposal included a solution to Arauco for the two miles of new 138kV power lines and substation that would be required, saving the company nearly $8 million in capital costs.

"The level of engagement by the Consumers Energy team was phenomenal," says Paul Krepps, who worked on the project as Global Business Attraction Manager for the Michigan Economic Development Corporation. "They coordinated very effectively with us and acted as the problem-solvers-in-chief in terms of energy solutions."

Says Elston: "Consumers was responsive and kept to their proposed timelines. The importance of this happening as planned can't be overemphasized with a construction project of this magnitude."

The State of Michigan offered Arauco a mix of tax exemptions and discretionary incentives, the big one being a Forest Products Processing incentive, which is expected to save Arauco nearly $12 million in state and local taxes over a 12-year period.

For Arauco, choosing Michigan turned into an easy call.

"We really ended up in the right spot," says Elston. "Consumers was always there to make sure we were making the right decisions for ourselves."