Where Business Longevity Is Baked In

Serendipity is how one of the oldest businesses in town got started decades ago. Specifically, a German baker found in 1896 what many other business owners have discovered since: Corsicana, Texas, is where businesses can be successful and enduring in north central Texas — without having to be in the Dallas-Fort Worth Metroplex. In fact, Corsicana is roughly equidistant to the Metroplex to the north, Waco to the southwest and Tyler to the east. To the south, Houston and Austin are easily accessible on Interstates 45 and 35, respectively.

In operation since the end of the 19th century, when Corsicana was a booming oil town, Collin Street Bakery is one of the oldest businesses in town, says Hayden Crawford, partner. "We have two bakeshops in Corsicana — one in historic downtown and the other on the Interstate. We also have a thriving mail-order business with the production facility right here in Corsicana. In fact, our executive offices are above it, and our downtown bakeshop is attached to it." By the way, one never gets used to the aroma of freshly baked breads and pastries.

"Corsicana is a business-friendly town with a city council willing to work with businesses to bring them here," says Crawford. "And thanks to our police chief who is also a connected actor [Robert Johnson], we've had significant Hollywood interest, with three or four movies having already been made here."

The crossing of two major railroads — today's Union Pacific and Burlington Northern Santa Fe — was a big boon to Collin Street Bakery, both directly and indirectly, adds Crawford. "The railroad brought in rapid growth of population and potential demand for our product. And it provided access to materials being shipped in, and to our product being shipped out."

Where Team Uniforms Are Made

Liebe's storied history in Corsicana dates to 1923, when the supplier of printed sports jerseys was launched by Robert Liebe and his wife in their home in St. Louis. By 1935, the small business attracted so much attention that Liebe signed a deal with Rawlings Sporting Goods to handle lettering needs for all their uniforms. (He also designed uniforms for the St. Louis Browns, St. Louis Cardinals and for many colleges and universities, as well as the American Basketball Association). Vinflex, the first fusible high gloss vinyl film, and Poly Pro Twill®, a shrink-free fabric made by the Webster Fabric division of the company that's still used today by major uniform brands, are other innovations that marked the ensuing decades at Liebe.

In 2009, Liebe purchased American Classic Outfitters (ACO) in Perry, New York. As with Liebe, ACO has a rich history in custom athletic uniforms — it's been the design and manufacturing partner for many of today's top brands. In 2017, Liebe purchased Dalco Athletic of Garland, a manufacturer and supplier of referee and umpire gear, and established an additional manufacturing facility in Corsicana. In 2018, both facilities consolidated under one roof in Corsicana. The 60,000-sq.-ft. facility provides garment and uniform decoration, as well as manufacturing capabilities, in the heart of Texas.

“We plan on doubling in size over the next five to six years and are happy to be in a location where we can do that.”
— Shawn Eastham, President, Polyguard Products

"The major sporting goods brands we do business with — Nike, Adidas, and Under Armour — are requiring Liebe to be an environmentally friendly, globally responsible partner," says Berghagen. "The PACE program allowed us to outfit the new Corsicana location with high efficiency lighting and energy solutions, thus becoming even more desirable to our partners."

When a location delivers the kind of sales and growth potential Polyguard is enjoying, you stay put and expand. That's what the employee-owned manufacturer of specialized products that protect surfaces and structures from moisture did. In 2016, it purchased a 380,000-sq.-ft. facility in Corsicana and moved most of its production there in May 2017.

Polyguard Products has achieved top-line sales growth for 26 consecutive years, says Shawn Eastham, president, citing his main reason for expanding in town. "We needed a larger facility that would give us room for our existing production and for our future growth. Corsicana is 20 miles from our headquarters, and it allowed us to have a smooth transition without having to relocate any of our employee owners. Deciding to expand our operation by relocating to Corsicana was absolutely the right decision. We're close enough to Dallas to be near its two major airports, but we don't have the big city commute. We plan on doubling in size over the next five to six years and are happy to be in a location where we can do that."

Besides the hour's drive to DFW International or Dallas Love Field airports, Eastham points to three more reasons the Corsicana location is so effective. "Housing is less expensive for our employees, which gives them a better quality of life. The city bent over backwards to make our transition a success. And Navarro College is a great resource for providing training to our current employee owners. I can foresee that many generations of Navarro graduates will be employed at Polyguard."

This Investment Profile was prepared under the auspices of the City of Corsicana's Economic Development Department. For more information, contact City Manager Connie Standridge at 903-654-4803. On the web, visit www.cityofcorsicana.org. 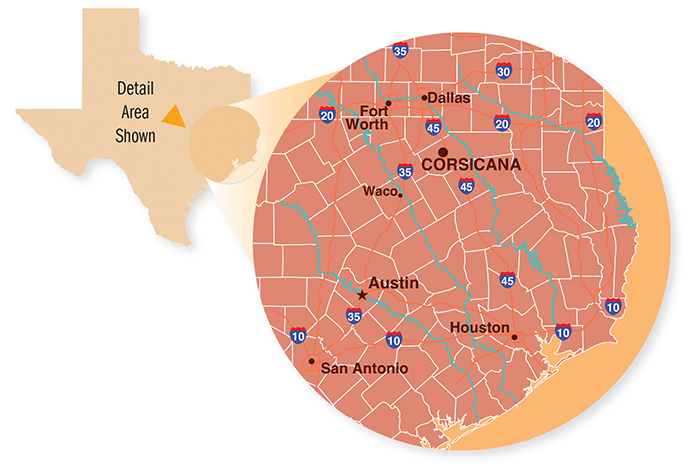