The Fast Track to Innovation 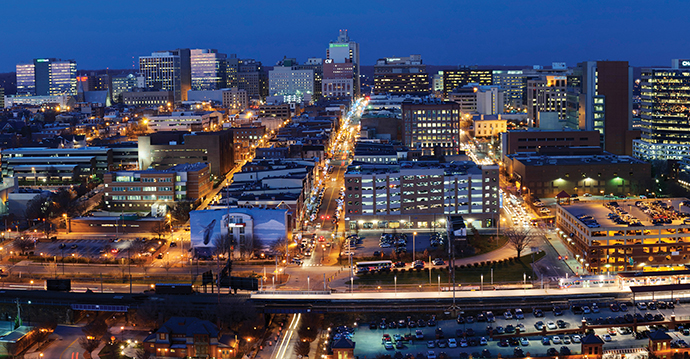 Where is the seventh most innovative company in the world based? According to Forbes' current such ranking, it's Delaware. Incyte was founded there in 2002 by researchers and former employees of DuPont Pharma. Incyte develops cancer treatments with emphasis on immune and targeted treatments. It employs more than 1,200 people in the U.S., Europe and Japan.

"It was a natural decision to stay in Wilmington," says Hervé Hoppenot, Chairman, President and CEO. "As we have grown, we have explored other options, however the city and state continue to provide the support and resources companies like ours need to be able to drive innovation. Delaware is a very business-friendly state, focused on attracting and growing innovative companies like Incyte. We have been very successful here — since the very beginning, the state and the city have been great partners who continue to support not only our business and industry, but that of other pioneering companies."

Delaware is smack dab in heart of the New York to D.C. megalopolis, notes Hoppenot: "It has much to offer in terms of its talent pool and is perfectly situated in close proximity to leading academic and research institutions in New York, Philadelphia and Washington, D.C. — aspects that are critical for businesses like ours that are powered by great minds and collaborative partnerships."

How to Hit Your STRIDE

Perhaps the best example of great minds and collaborative partnerships in the state is STRIDE — the Science, Technology and Research Institute of Delaware, which provides research and development services to companies of all sizes in the chemical value chain.

"We started STRIDE in 2016, when DuPont laid off a number of scientists and other functional experts — about 100 very experienced industrial scientists," says Seetha Coleman Kammula, President and CEO. "It is an employee-led, non-profit initiative to offer scientific services, do research — to do a lot of good."

STRIDE caters to two markets: established chemical companies in need of scientific and technical resources for long- and short-term projects and startup companies that have funding but lack experienced staff — early-stage growth companies.

"It's for a company that may have started in Silicon Valley, because that's where the money is," says Kammula. "But it's a very expensive place. The talent is there, and the money is there. They find they can start in Silicon Valley, but it's very hard to grow there. Real estate is expensive. People are expensive. They can't find affordable places to live. For those and other reasons, Delaware could be the talent magnet they need with its supply of scientific talent."

Since May, STRIDE has been working with Zymergen, a California-based molecular technology company, to develop its microbially derived building blocks for applications such as films, coatings and adhesives. "Our platform offers the capability to create unique specialty materials from biology and at a commercially viable cost," says Dr. Joachim Ritter, Vice President of Research & Technology at Zymergen. "Using this approach, we can access previously untapped sources of molecular diversity to develop novel materials with properties not previously possible using traditional methods. We are partnering with proven innovators across industries to develop these novel products."

"When Zymergen approached us, we quickly put together an excellent team of experts in films, coatings, adhesives and analytical chemistry and gathered the required laboratory infrastructure to help them get to market faster and effectively," Kammula explains. "This is at the heart of our value proposition."

There could well be more to that value proposition in time, she relates. "The business model we have is about taking people into our professional network, providing the infrastructure for them — giving them insurance, payroll and tax identifiers. But STRIDE could expand to other functions. Chemical industry companies need regulatory approvals; health, safety & environmental expertise; and supply chain talent, import/export document specialists. Delaware has had three or four blue chip chemical companies, and the back-office functions of these companies are around here. If we could find the resources to expand our talent pool beyond scientists, that would be very attractive to companies considering coming to Delaware."

Where Coders Are Clustered

So would the coding talent they would find in Wilmington and elsewhere in the state. Some of that is thanks to Ben duPont, who in 2015 co-founded Zip Code Wilmington, a nationally recognized, non-profit coding boot camp.

"Coding is a passion of mine," says duPont. "In the future, no matter what industry you're in, software will be very important. That's one reason we started Zip Code Wilmington — to build that base. We now have 200 alums in the city, and we're graduating students at a rate of about 100 per year. Almost all are placed locally. While we're very excited about placing them in an average salary of just over $75,000, finding an equivalent coder in Palo Alto or New York City will run about $120,000. We're an inexpensive place in which to build a software development team."

“Delaware is a very business-friendly state, focused on attracting and growing innovative companies like Incyte.”
— Hervé Hoppenot, Chairman, President and CEO of INCYTE

You can't beat Delaware's East Coast location, duPont asserts, nor its abundance of natural assets for a state that's under 100 miles long north to south, not the least of which are Atlantic Ocean beaches.

"There is a lot of open space — thousands of acres in New Castle County with parks and mountain biking trails. We're close to the Chesapeake Bay area for sailing — there are a lot of great things to do with your family and friends.

"We're close to everybody else, and they're close to us," adds duPont. "With the Amtrak corridor, employees can live in Philadelphia and be here in no time, and in Baltimore as well. That already happens with some frequency. It's important to not get hung up on state borders — Delaware's population is under 1 million, but the broader area has many times that."

One of the best parts of managing a business in Delaware is accessibility to those with a say in its business climate, which Ben duPont can well vouch for. His family's chemical conglomerate has been a fixture in Delaware for more than two centuries.

"Because of our state's size, everybody has access to everybody else," he relates. "It's less partisan than other states — you can't be super partisan because you wouldn't get anything done. People here understand that we must work together to achieve outcomes that benefit the state and the companies moving here."

In recent years, he notes, the state's economy has evolved from one dominated by two large companies — DuPont and MBNA, the credit card company — that were not hiring to several mid-sized companies that are hiring, including DowDuPont spinout Chemours, Incyte, CSC and JPMorganChase. The latter is actively tapping the coding talent pool, notes duPont. "The economy has become more diverse and at the same time more stable. Delaware is a great place to start your business and a great place to grow it. It's being close to everybody at a very low cost."

The Beach and Business Vibe

When scoping out sites in Delaware, stop in Rehoboth Beach or Milton or Lewes, and have a beer with Sam Calagione — preferably one of his. He's founder of Dogfish Head Craft Brewery and owner of the brewery, a distillery, restaurants and a hotel in the First State. He opened his first location on the coast in 1995.

"I wanted to open a brewery in a state that didn't have one yet, and Delaware was the closest one to where I grew up, which is how I picked it," he relates. "I knew the area already and loved the coastal vibe."

Dogfish Head is the largest craft brewery in the Mid-Atlantic region, although there are some great ones in surrounding states and in D.C., says Calagione.

“People here understand that we must work together to achieve outcomes that benefit the state and the companies moving here.”
— Ben duPont, co-founder of Zip Code Wilmington

"We make almost twice as much beer as any other craft brewery in the region. That's by virtue of how central we are. We get to live at the beach — I was paddle boarding in our harbor this morning — and yet in a two-hour drive I could be in D.C. or Baltimore, and in three and a half be in Manhattan. It's a wonderful place to distribute a high-end product from, because we have all these major metro areas nearby."

Echoing Ben duPont's observation that Delaware is an easy state to do business in, Calagione gives high marks to the state business climate and, more importantly, to the public-private cooperation that makes it possible.

"Our state has a centuries-long tradition of being not just very entrepreneurial, but of having an overlap of the agricultural and business communities," he explains. "Many decades ago, DuPont funded construction of Route 13, running north-south through the state, to help the southern farmers get their produce to the metro markets of Wilmington and Philadelphia. Private industry and government have worked well together. The governor and legislators are all entrepreneur- and business-friendly.

"We've been around 23 years now and have been involved in crafting six different pieces of legislation that have become law, including statutes for craft brewers and craft distillers and the microbrewers' statute, too." Calagione points out. "We can do that in a way you can't in New York or Boston or most states with red-tape-laden regulatory bodies. It's very hard to be a non-lawyer or non-lobbyist and move legislation forward in a lot of states. But here in Delaware they believe in the local entrepreneurs and in making sure we have free markets and opportunities to grow our companies and add more employees."

This Investment Profile was prepared under the auspices of the Delaware Prosperity Partnership. For more information, call (302) 477-7497 or visit www.deprosperitypartnership.com or @choosedelaware