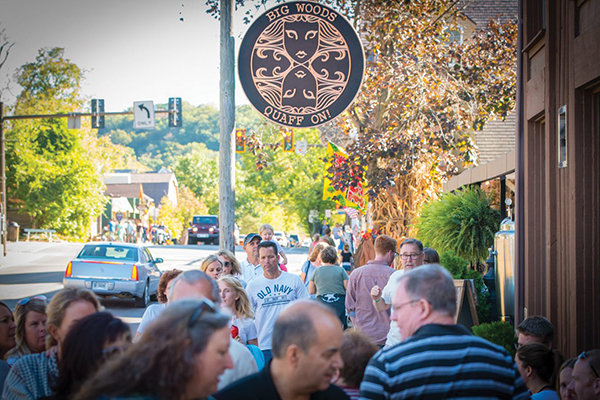 Bustling towns such as Nashville will bustle even more with high-speed broadband.
Photo courtesy of Town of Nashville
by ADAM BRUNS

The Town of Nashville, Indiana, sits 25 minutes from Indiana University in Bloomington to the west and civic architecture gem Columbus to the east. But there's not much sitting around going on in the community of 15,000, where more than $40 million in facility development is underway.

A new performing arts center is rising. So is a new distillery, brewery and restaurant complex in an expanded 325-acre downtown district. And, literally underneath it all, more than $20 million in broadband infrastructure is being installed, thanks to a confluence of new state laws, a USDA smart grid loan and eager service providers such as South Central Indiana Rural Electric Membership Corporation (SCI REMC) and Jackson County REMC, two of the electric distribution cooperatives served by Hoosier Energy in central and southern Indiana and southeastern Illinois.

A study released in May 2018 by the Purdue Center for Regional Development found that the five-county southern Indiana region could see a potential economic benefit of $218 million over 15 years if all currently underserved households had access and subscribed to broadband service.

It's an urgent national issue. But local solutions in Indiana are showing the nation a way forward. Key legislative measures enabled communities to declare broadband investments tax-exempt in perpetuity, and allowed service providers such as SCI REMC and Jackson County REMC to use their existing infrastructure to deploy it. Those laws were key to sparking the fiber now unspooling across the region, which could help reverse population decline, repopulate school systems and therefore fill jobs and new housing properly equipped with technology that's skipped from yesterday to tomorrow — speeds are available at up to 1 gigabit per second, or 100 times the national average.

"It's a big deal," says Nashville Town Manager and Economic Development Manager Scott Rudd of the new service to some 7,200 homes and businesses.

“Not having adequate broadband connectivity today is equivalent to missing out on a railroad or four-lane highway last century.”
—Roberto Gallardo, Assistant Director, Purdue Center for Regional Development

The broadband amenity — which most now would categorize as a necessity — raises the quality of life in an area lacking little in that respect, from Brown County State Park and over 100,000 acres of additional public land to the artisans and destination venues in the town, located within 50 minutes of Indianapolis. "You can get away and commute in when necessary," Rudd says, "but people want to live here and telecommute around the world." Not only are area home buyers bringing wealth to the community, "they're also highly entrepreneurial in nature, and might start businesses or become angel investors."

A new wave of broadband-enabled entrepreneurs sounds promising. But bigger firms benefit too. Brownstown Quality Tool & Automation got an early connection, and large AutoCAD files that used to take hours to process now take seconds. Egg producer Rose Acre Farms will benefit from better connectivity among its string of facilities. "It's nice to hear it from the actual owner of the business," says Mark McKinney, general manager of Jackson County REMC, which also is introducing more smart grid technology to its electric distribution system.

Now the only obstacle is connecting people fast enough. "Our feasibility study indicated a 30-percent take-up rate at the end of year one," McKinney says. "We just started hooking up people in May, and we are at 54 percent." He likens it to the take-up rate when electricity came to the area in the 1930s, when Jackson County REMC's first board secretary, S. J. Brewer, told the assembled at a 1937 meeting, "It strikes me that this is the time, and that it's now or never."

Total investment in the overall project will top $60 million across Jackson County REMC's 20,000-member territory. The $9.7-million Phase 2 was just launched by Jackson Connect, the not-for-profit division of Jackson County REMC. Jackson County Industrial Development Corporation Executive Director Jim Plump calls the investment "absolutely something we have to do" to improve quality of place and, oh yeah, help students to their homework.

"School is opening today, and this will be the first year this will be in place in some of the homes," Plump says. "I know some parents with kids in school who live in rural areas of the county, and they are thrilled to death they will have this opportunity." So are farmers accessing data from their high-tech equipment in the fields.

"Years ago the questions would be about the size of the water, sewer or gas line or the capacity of the electric utility provider," Plump says. "Those questions are important now too, but companies assume in a community with industry that those basic things are in place." Fiber does more than remove doubts: It also introduces the possibility of targeting different industry niches such as data centers. "It fits perfectly in our overall strategy to continue to grow our industrial base," says Plump, in an area where advanced manufacturing employs around one-third of the workforce.

Some of those homes are known to belong to a few of the state's more notable individuals from Indiana sports and business arenas, who find maintaining a low profile and just being themselves an attractive notion.

Bringing in high-speed fiber allows thousands more to do the opposite: Raise the profile of their endeavors and, in the process, make a region now wired for growth that much more attractive to investors.