The Center of Attention 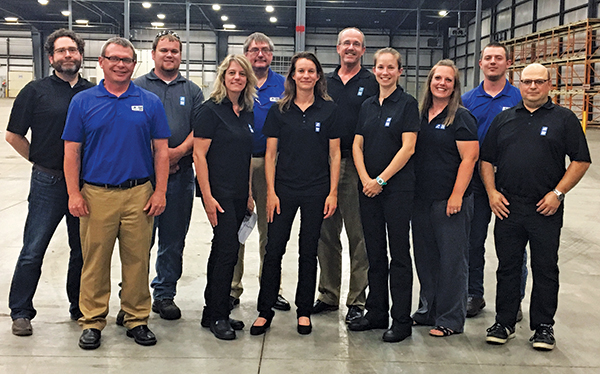 Junction City lived up to its name on June 19 when Camso, a Canadian company that makes products for off-road vehicles, ended its national site search by selecting a building in the central Kansas community for a $36.4-million new plant investment.

Headquartered in Magog, Quebec, Camso employs more than 7,500 workers in 26 countries around the world, and now it's going to add a 23rd plant location to its global footprint: the 25,000-resident community of Junction City.

"We started with a national search to find a site," says Jason Collins, plant director for Camso in Emporia, Kansas. "Our search pretty quickly narrowed in on the Midwestern states."

After considering multiple sites in Kansas, Nebraska, Iowa and Missouri, Camso decided that the optimum mix of factors made Junction City in the center of Kansas the best location for the new plant. An available 139,000-square-foot building in Junction City was tapped to become home for the operation that will employ 41 full-time workers by January of 2020.

"In terms of geography, this is close to our customers, OEMs and after-market suppliers," says Collins. "It is right on Interstate 70. We also wanted to position ourselves close to a major university, and Junction City is within 20 minutes of Kansas State University in Manhattan with a major engineering school. Plus, we have the advantage of being located close to Fort Riley, giving us the opportunity to tap into retiring Army soldiers as an employee base. There are 2,500 to 3,000 transitioning soldiers a year. That was a big factor."

“We were met with a very big welcoming from the economic development team in Junction City. They were looking to bring more manufacturing jobs to the area, and they stepped up to support us.”
— Jason Collins, Plant Director, Camso

On top of that, says Collins, "we were met with a very big welcoming from the economic development team in Junction City. They were looking to bring more manufacturing jobs to the area, and they stepped up to support us."

Other employers in the community tell a similar story. Leon Osbourne, president of Kaw Valley Engineering in Junction City, says the central U.S. location enables firms like his to serve clients nationwide. "We are 15 minutes to the regional airport and only two hours to Kansas City International Airport," he says. "We have a great work force, and we are adjacent to Fort Riley, making this a perfect location for any industry to draw upon our outstanding work ethic. Plus, we have great utilities and a lot of property that is easily accessible. Rail, gas, electric, water and sewer are all here in abundance with great reliability and quality."

Osbourne puts his money where his mouth is. In addition to expanding his own company, he stepped up to volunteer to serve as chairman of Junction City First, the economic development initiative of the Junction City Area Chamber of Commerce. "Our goal is to help existing businesses and promote new growth and new business," he says.

The city does its part as well. When Camso came calling, the city commission authorized the issuance of taxable industrial revenue bonds of up to $40 million for the project. The issuance of the industrial revenue bonds will give the company a property tax exemption by locking in the 2017 property tax rate for the next 10 years and make Camso eligible for a sales tax exemption on equipment purchased.

"Camso is a global company with a proven track record," says Allen Dinkel, city manager. "Our goal is to keep expanding our base of industry and employment. We want to diversify our mix of businesses, and we are on that path. By creating different sectors, we will bring in more business to this community."

Upgrading infrastructure will help, Dinkel adds. "We're spending $25 million on water and wastewater treatment improvements, adding reliability to our system," he notes. "We're also undertaking a major streetscape improvement program, spending more than $1.5 million a year for the past five years. It is starting to show."

Some of the best testimonials for Junction City, he says, come from transitioning military. "Our retired soldiers say they wish they'd come here sooner. Most who come here genuinely love this community. My wife and I adopted an 18-year-old recruit who came here from Bakersfield, California. We became her ambassadors. She tells us that she loves living here."

Junction City is not done improving itself either, adds Dinkel. "We're building a brand new high school in three years, and we plan to recruit even more retiring military to live here and pursue a second career," he says. "We want everyone to know that Junction City is a progressive community and that we have a plan for our future."

This Investment Profile was prepared under the auspices of the Junction City Area Chamber of Commerce. For more information, contact Mickey Fornaro-Dean at 785-762-1976 or mickey.dean@jcacc.org. On the web, go to www.jcgced.com.