Labor Supply: Half Full or Half Empty? 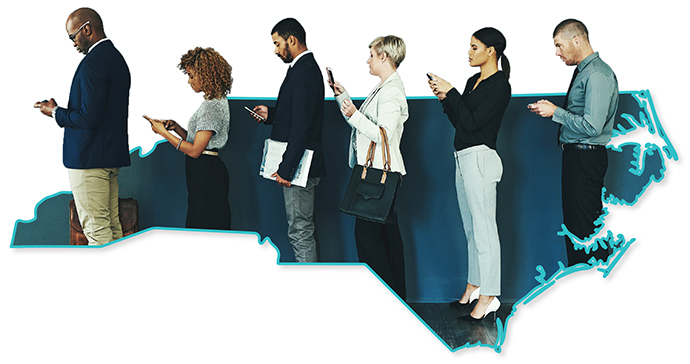 Perhaps expanding employers in central North Carolina, especially in the Piedmont Triad — the region anchored by Winston-Salem, Greensboro and High Point — will find the large numbers of workers they'll need in the coming months with no problem. A recent workforce survey says that may not be the case.

The population of the Triad and the nearby Raleigh-Durham metro, the high number of college grads North Carolina produces each year and a significant military retiree and spouse population should help staff an expansion at the FedEx Express Mid-Atlantic Hub at the Piedmont Triad International Airport in Greensboro that will require 400 new workers. A site in Kernersville, in Guilford County, was believed at press time to be the location of an Amazon fulfillment center, though no final plans had been announced. And the same county was believed in the spring to be the site of a $400 million regional distribution center for Publix Super Markets that would employ 1,000; that project, too, had not been officially announced in late August.

Those projects alone, should they come to fruition, will make a sizable dent in the region's supply of workers. These companies and others will find a recent study of North Carolina's labor market of great interest. The key finding of the 2018 Employer Needs Survey, published by the NCWorks Commission and conducted on its behalf by the North Carolina Department of Commerce's Labor & Economic Analysis Division (LEAD): Half of North Carolina employers had difficulty filling open positions in the late 2016 to early 2018 timeframe.

The survey, an update to similar surveys released in 2014 and in 2016, asked more than 2,000 North Carolina businesses about their hiring practices with an emphasis on hiring difficulties and workforce needs. In addition to an overall sample of all industries, researchers surveyed a sample of manufacturers and a set of Science, Technology, Engineering and Mathematics (STEM)-related industries.

Among the findings of the survey were:

"This year's survey provides vital data about the extent to which North Carolina businesses are experiencing hiring difficulties and identifies the top reasons, recognizing that different challenges exist for different industry segments, different business sizes and different regions," NCWorks Commission Chair Kevin Trapani wrote in a letter accompanying the report on the survey results. "The conclusions drawn from the report will assist the workforce development ecosystem to develop or move to scale data-informed policies and programs that equip job seekers with the skills and experience required by businesses."

In particular, he cited the need for younger North Carolinians to participate in apprenticeships, internships and other work-based learning programs that will help them develop employability skills. Trapani also said that the survey pointed to opportunities for the state's workforce system to more fully engage with employers and promote greater awareness of available resources.

"The findings in the report support the key elements of Governor Roy Cooper's NC Job Ready initiative and his priorities for workforce development, to which we are fully committed," Trapani said. "Our continued, collaborative progress on NCWorks Certified Career Pathways, business engagement strategies, and NCWorks Career Centers will support NC Job Ready by preparing North Carolinians for the jobs of today and tomorrow."