How Florida uses university-employer alliances to reshape the workforce. 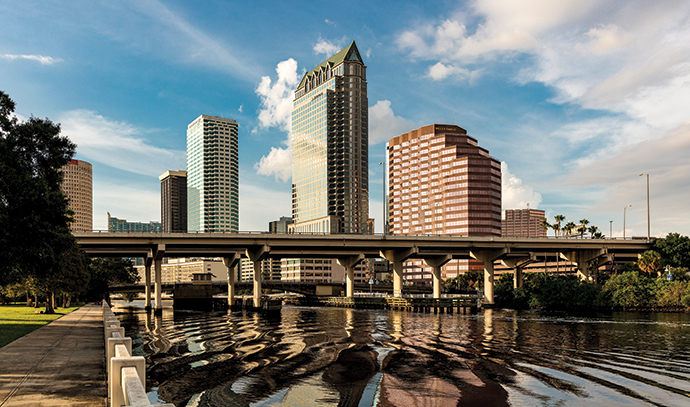 The Tampa skyline is growing thanks to expanding firms like ReliaQuest.
Photo by Ryan Ketterman
by RON STARNER

A recent report that blue-collar workers are now scarcer in America than white-collar workers set off alarm bells in many states, but one place that's ahead of the curve is Florida.

Ranked fourth in the nation for high-tech employment by CompTIA, Florida has nearly 237,00 high-tech workers, many of them in manufacturing and other blue-collar jobs that require special skills.

This doesn't happen by accident. Around the state, innovative programs are being developed to train the STEM workers needed by manufacturers, health-care providers and other trades.

Supported by Osceola County, the University of Central Florida, the Florida High-Tech Corridor Council and others, BRIDG provides the physical infrastructure and collaboration opportunities that make commercialization possible. It's located at NeoCity, a 500-acre master-planned community in Osceola County about 20 minutes from Orlando International Airport.

"In 2012, we wanted to create something new for Central Florida: a STEM-focused technology campus that would have the same impact here as it had in Austin," says Chester Kennedy, CEO of BRIDG. "It was designed to play a leading role in the economic transformation of the region; that evolved into what we have today. Our first lot of microelectronic wafers came out last month."

Land of Magic Is a Science Haven

The breakthrough development is housed in NeoCity, a one-of-a-kind community comprised of more than $200 million in investment from public and private sources. "This is a place that allows companies to develop new microelectronic-based products," says Kennedy, who was recently named by Orlando Magazine as one of the 50 most powerful people in the region and a "Game Changer" by the Orlando Business Journal.

"We are in 109,000 square feet on five acres inside this 500-acre technology district," he says. "Our hope is that this becomes a catalyst for the entire region from a microelectronics standpoint. How do we help this country become strong in microelectronics? It starts here."

Partnering with higher-ed resources like UCF is a start. "A Florida Polytechnic University partnership is in place too," says Kennedy of the state's newest four-year university just off Interstate 4 in Lakeland to the west of NeoCity. "We're in the perfect location. As you look across this swath of Florida, from Tampa to the Space Coast, I don't think there's a more exciting place to be in the U.S. right now. People who are involved in autonomous vehicle testing come here. The military presence with Central Command is huge, and of course we have the space industry at Cape Canaveral. The space program is more alive today than it has ever been, and we're right in the middle of all that." 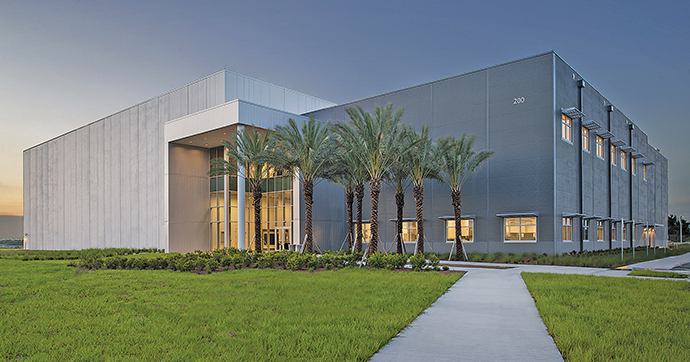 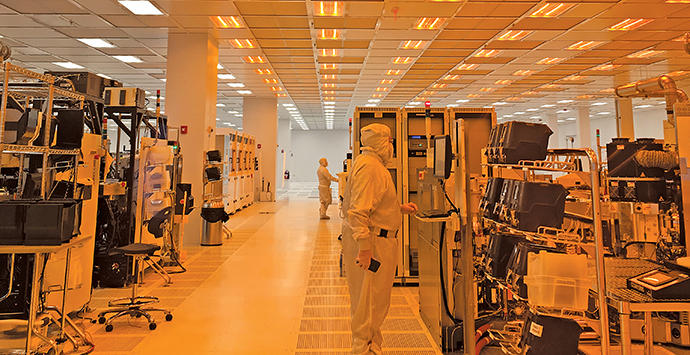 BRIDG in NeoCity near Orlando is a unique partnership that is developing the microelectronic technology of the future.
Photos courtesy of Seamus Payne/Skanska and BRIDG/NeoCity

More expansions are planned for BRIDG and NeoCity. "We have a 100,000-square-foot office building that is more than halfway complete," Kennedy says. "We have a lot of demand for lab space. A new STEM high school is under construction, NeoCity Academy, and several companies are considering building their own facilities here. This will be class A office space when it's finished. About 100 people work here now; around 5,000 employees will work on campus upon buildout. This is new and not common for this area."

Just 20 minutes from Disney World and Celebration, NeoCity is changing the way people think about tropical, tourist-friendly Florida, and it's not alone in the Sunshine State.

All around this state of 21 million people, partnerships are sprouting between schools and employers to close critical skills gaps, particularly in blue-collar STEM jobs.

Citigroup is partnering with the University of South Florida in Tampa to equip workers in fintech. UCF is partnering with Lockheed Martin on defense work, particularly in cybersecurity. Embry-Riddle Aeronautical University supports the rapidly changing space program on the Space Coast. The University of West Florida is working with financial institutions like Navy Federal Credit Union in Pensacola on cybersecurity and fraud prevention. Florida International University is teaming up with banks in Miami to do similar work.

These kinds of partnerships have become even more important as the nation's blue-collar workforce has shrunk consistently since the mid-1990s, according to a groundbreaking report released Dec. 13 by The Conference Board. As the report details, "growing blue-collar labor shortages result from converging demographic, educational and economic trends in the U.S. economy." Tight labor markets are especially visible in transportation, production manufacturing and healthcare.

"Over the next decade," the report concludes, "the extent of the challenges caused by blue-collar labor shortages will depend largely on three factors: to what extent employers can further automate blue-collar jobs; how many additional individuals are brought into the labor force; and how many workers move into blue-collar jobs from other parts of the labor market."

Made in Florida: STEM-ing the Tide

In Florida, employers are not waiting for demographic trends to turn around. They're rolling up their sleeves and meeting these challenges head-on. For example, the Harris Corp. announced plans on Dec. 10 to invest $125 million in internal R&D this fiscal year in Florida, bolstering high-paying jobs and the company's innovation leadership in the state.

The announcement in Melbourne on the Space Coast includes investments in electronic warfare, robotics, avionics and smallsats, and it supports research partnerships with Florida companies and universities. Harris partners with UCF, USF and the Florida Institute of Technology in Melbourne. "These partnerships provide technological insight for Harris and increase company visibility to fill key technology positions," the company said.

Harris is one of the largest publicly traded firms based in Florida. It has 15 locations with 3.5 million sq. ft. of office and manufacturing space in the state, including the 464,000-sq.-ft. Harris Technology Center and 23,000-sq.-ft. Global Innovation Center in Brevard County.

In Tampa, Siemens and Chromalloy Gas Turbine Corp. celebrated the opening of their new joint venture, Advanced Airfoil Components, in October. The partnership represents a capital investment of $139 million and creation of 350 jobs in Hillsborough County. New blue-collar jobs include technical engineers, manufacturing technicians and production workers, in addition to administrative positions in finance, human resources, procurement and logistics.

Florida ranks among the country's top 10 states for manufacturing and is home to more than 20,500 manufacturing companies. More than 363,100 Floridians work in manufacturing, and the state's schools regularly produce STEM graduates at a rate far exceeding the national average. In 2018, U.S. News & World Report ranked Florida as the No. 1 state for higher education for the second consecutive year.

“Jacksonville is a hidden gem. It’s not too big, and it’s not too small. It’s central to large markets and has a lot to offer our employees and their families.”
— Brian Wolfburg, President and CEO, VyStar Credit Union, Jacksonville

Tampa has long been a leader in employer-university alliances. Tampa-based enterprise security provider ReliaQuest announced in October that it teamed up with USF on the creation of a $1-million cybersecurity lab. Brian Murphy, founder and CEO of ReliaQuest, said the lab will focus on teaching students the skills they need to keep pace with a fast-changing industry.

"Having USF in our backyard is a huge advantage," he says. "It is a reputable university with a large student base. They have highly engaged professors that want the university and corporate tie-in. We're investing in the school by helping them co-teach and co-train."

Murphy founded ReliaQuest 11 years ago and has seen his company's recurring revenue double each year. "Total headcount now is over 300 companywide, and we will hire 200-plus people next year," he says. "We have reached capacity in our headquarters space and have started working with brokers to find our new home in Tampa. The skyline of Tampa is going to look very different over the next five years, and our growth will contribute to that."

Come for the Lifestyle, Stay for a Lifetime

They're saying similar things in Jacksonville, where VyStar Credit Union bought the 23-story SunTrust Tower and is moving its 700-worker headquarters into the downtown high-rise. "VyStar started 66 years ago on the west side of Jacksonville," says Brian Wolfburg, president and CEO of VyStar. "We have 100,000 square feet and 500 employees on the west side, plus an 85,000-square-foot call center in Fleming Island, just west of Jacksonville. We were quickly running out of space and needed to find a new home. We met with the owners of the former SunTrust Tower and closed on the deal a couple weeks ago."

Wolfburg says that "Jacksonville is a hidden gem. It's not too big, and it's not too small. It's central to large markets and has a lot to offer our employees and their families. We've been growing at over 10 percent a year in assets and loan deposits, and our workforce has been growing in proportion to our membership and asset base. We'll grow our workforce by 15 percent over the next year. We're adding new departments as we prepare to go over $10 billion in assets."

VyStar's meteoric rise would not be possible without the support the firm receives from local colleges and universities, particularly on the training side, he adds. "We created a chief digital officer position about six months ago to look at how a digital strategy can be utilized and to look at how we can use fintech to grow our business and better serve our members," he says.

"When I was looking for where I wanted to move to take on the role of CEO last year, Florida was not one of the locations that rose to the top of my list, and that was a shame," Wolfburg notes. "I thought it was a very busy and touristy location. Since then, I have come to love Florida and specifically Northeast Florida. This is a great community that has a lot to offer. Everyone realizes that they live in an amazing place. Our employees don't want to move away, and neither do I." 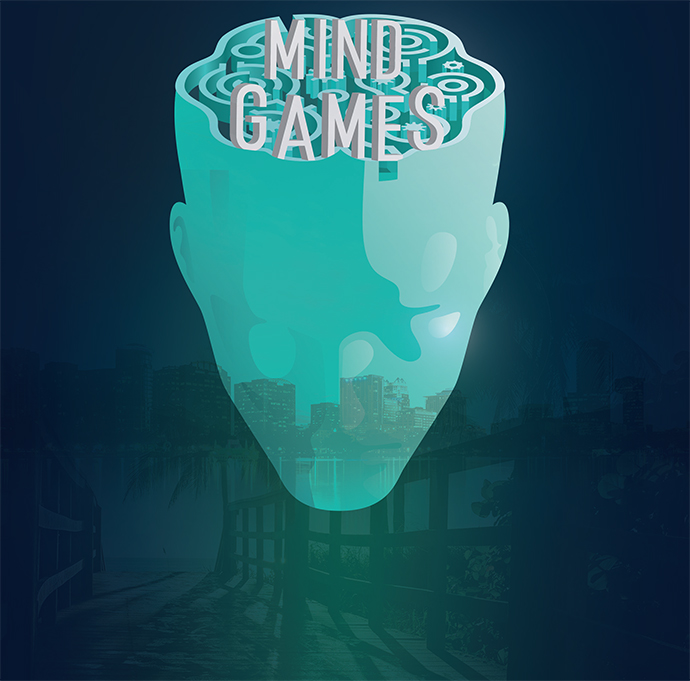