Museums and historic sites across the heartland have historic ties to industry, but their neighborhoods aren't living in the past. 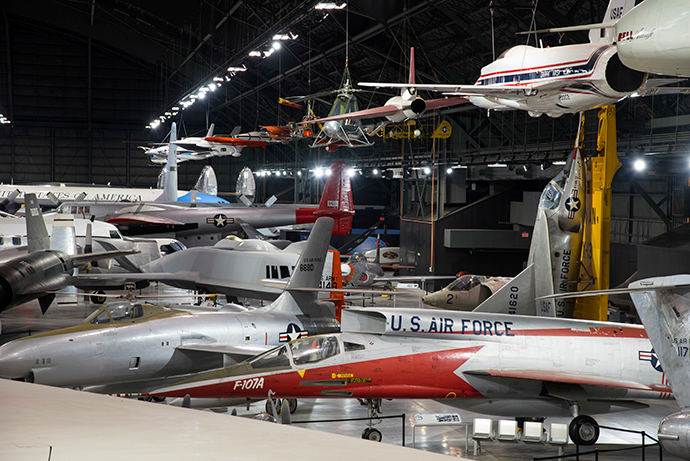 The National Museum of the U.S. Air Force at Wright-Patterson Air Force Base near Dayton, Ohio.
Museum photo by Ken LaRock; courtesy of U.S. Air Force
by ADAM BRUNS

When Brad Novak started collecting bobblehead dolls in 2002, he probably didn't imagine that one day he'd be co-founder (with Phil Sklar) and president of the National Bobblehead Hall of Fame and Museum in Milwaukee, Wisconsin.

Today the collection has grown to more than 5,000 bobbleheads, including recently created editions of famous underdog Daniel "Rudy" Ruettiger of Notre Dame fame, and of Gus Polinski, the "Polka King of the Midwest" character played by John Candy in the film "Home Alone." The permanent museum is scheduled to open in early 2019 at a building near the historic Walker’s Point neighborhood, at the former Kramer International foundry where Colectivo Coffee Roasters has its Foundry cafe. The city’s industrial and port heritage included a number of manufacturing companies that operated their own foundries.

How many other Midwestern museums have ties to their locations' unique industrial heritage? Here’s a brief checklist for your next business trip to the heartland:

Illinois: The Museum of Science & Industry in Chicago — the largest science center in the Western hemisphere — is housed in the former Palace of Fine Arts from the 1893 World's Columbian Exposition. But you might find just as much compelling industrial and labor movement history a few miles away at the Pullman Historic District, built in 1880-84 as a planned model industrial town for the Pullman's Palace Car Company. Today the area is seeing a development renaissance.

Indiana: If you've ever seen the inspirational film "Breaking Away," you know that the locals known as "cutters" got their name from Indiana's limestone business, which has produced stone for famous structures around the world. You can find out all about it at the Land of Limestone Museum, housed within Stonegate Arts & Education Center in Bedford, the "Limestone Capital of the World." In July 2014, The City of Bedford engaged the Lawrence County Economic Growth Council Inc. to manage the former Indiana Limestone Co. facility when it acquired the building from Oakland City University, and subsequently renamed it. Among other functions, StoneGate provides classrooms and office space to Ivy Tech Community College and Oakland City University.

Iowa: The John Deere Tractor & Engine Museum is located on the west side of the TechWorks Campus, an advanced manufacturing, innovation, and commercial center in downtown Waterloo, Iowa, where the company's tractor era began with the acquisition of the Waterloo Gasoline Engine Company and the Waterloo Boy tractor in 1918.

Kansas: "In 1962, Cosmosphere founder Patty Carey set up a used Planetarium Projector and rented folded chairs in the Poultry Building of the Kansas State Fair Grounds and created one of the first public planetariums in the central United States," explains the website of this STEM education center and space museum, which moved to the campus of Hutchinson Community College in 1966 and in 1998 was named one of the first affiliates of the Smithsonian Institution. Among Hutchinson's major employers is an Arconic (formerly Alcoa) plant that makes aluminum for the aerospace sector.

Michigan: In 1904, Detroit newspaper publisher and philanthropist George Gough Booth and his wife Ellen Scripps Booth bought 175 acres in rural Bloomfield Hills, Michigan, that would ultimately become the renowned Cranbrook Educational Community. Known for hosting one of the first contemporary art museums in America, Cranbrook also is home to an Institute of Science, as well as pre-K through Grade 12 independent college prep schools. The campus was designed by Finnish architect Eliel Saarinen, father of modern industrial designer and architect Eero Saarinen.

Minnesota: It's a toss-up: The Museum of Questionable Medical Devices (the state's medical device cluster is among the best known in the world) now is incorporated into the Science Museum of Minnesota. There's the Mill City Museum, located along the Mississippi River waterfront in the industrial ruin of the former largest flour mill in the world when it was completed in 1880. But you truly don't want to miss The SPAM Museum in Hormel's hometown of Austin, where you'll learn why the SPAM Jam is Hawaii's largest festival, the history behind the product's invention in 1937 and distribution to soldiers during World War II, and how it came to be a centerpiece of Monty Python lore. Today Hormel employs 20,000 around the world.

Missouri: Located in the former International Shoe Company building in St. Louis, the City Museum, opened in 1997, was the brainchild of artist and entrepreneur Bob Cassilly, whose website describes it as "an eclectic mixture of children’s playground, funhouse, surrealistic pavilion, and architectural marvel made out of unique, found objects," all of them reclaimed from within the city's municipal boundaries. “The point is not to learn every fact, but to say, ‘Wow, that’s wonderful,’ ” Cassilly said. If a giant jungle gym called MonstroCity whose levels "are sometimes only connected by climbers" sounds intriguing, this cool place is for you.

Nebraska: Closed after the formation of Amtrak in 1971, Omaha's grand Union Station was gifted to the City of Omaha by Union Pacific in 1973. A Western heritage museum that opened shortly thereafter endured through several station renovations and was renamed the Durham Museum in 2008, after major benefactors Charles and Margre Durham. He was a civil engineer who built the Omaha-based Henningson Durham & Richardson (now better known as HDR) into one of the nation’s largest architectural and engineering companies.

North Dakota: In addition to displaying (and frequently flying) its many aircraft, the Fargo Air Museum, opened in 2001, also houses one of the Midwest’s largest aviation libraries. Among the aircraft on display is an example of the Global Hawk, an unmanned reconnaissance drone with an impressive 100-foot wingspan, and a key component of the state's unmanned aircraft systems (UAS) cluster forming around the assets of Northern Plains UAS Test Site in Grand Forks. The North Dakota Department of Transportation was selected in May 2018 as one of 10 participants in the UAS Integration Pilot Program, an initiative aimed at shaping the future of drones in the United States.

Ohio: The National U.S. Air Force Museum at Wright-Patterson Air Force Base near Dayton (home of the Wright Brothers) is the world’s largest and oldest military aviation museum. Dating to 1923, when it opened in an aircraft hangar at the edge of McCook Field near downtown Dayton, the museum moved after area residents donated funds to purchase land in the 1920s to help establish Wright Field as a research center. The collection has grown to more than 360 aerospace vehicles and missiles. The Wright Company factory, founded in 1909, was the first factory established for the purpose of building airplanes.

South Dakota: The Mammoth Site in Hot Springs, South Dakota, is an active archaeological dig site that boasts the largest concentration of mammoths in the world, which fell into a sinkhole from the Pleistocene Age (Ice Age) recently determined to be 140,000 years old. The site is the only accredited museum in the state’s beautiful Black Hills. The original discovery occurred in June 1974 when heavy equipment operator George Hanson was leveling ground for a Hot Springs housing development and struck a 7-foot-long tusk with his blade — perhaps the supreme example of why archaeological reports are a part of every site selection’s due diligence.

John Deere Tractor & Engine Museum is located on the west side of the TechWorks Campus, an advanced manufacturing, innovation, and commercial center in downtown Waterloo, Iowa.
Image courtesy of Deere & Company